World In Pushback to U.S., China “Has No Fear of Trouble” in S. China Sea
World 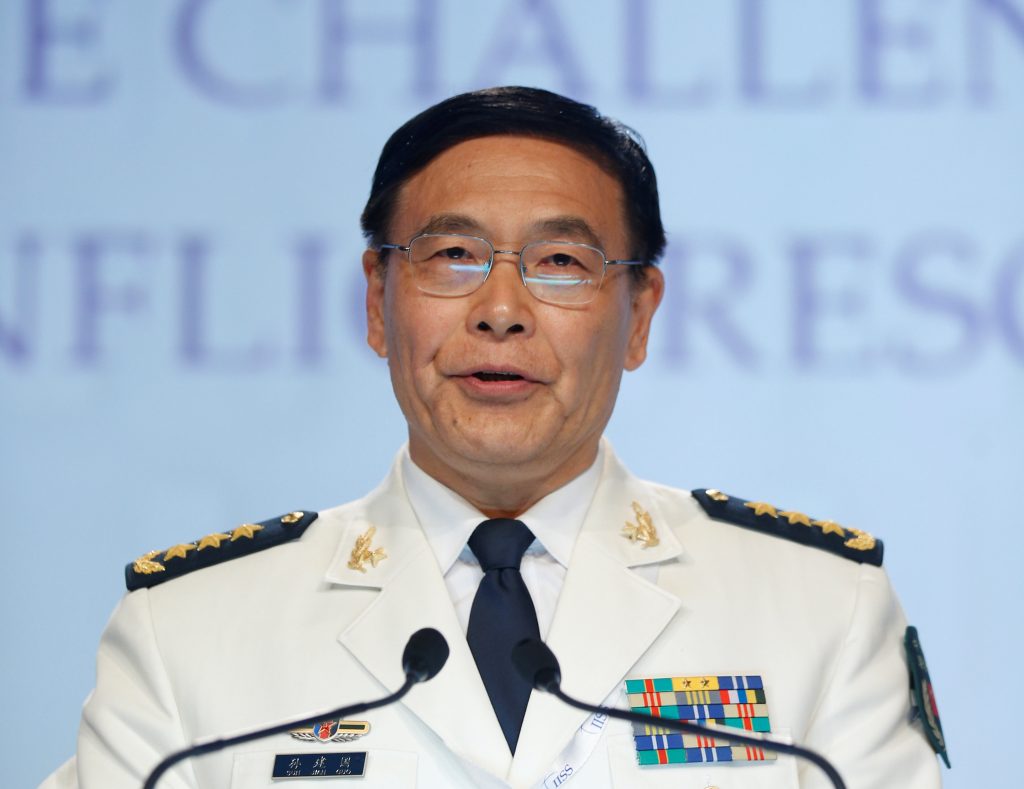 China rebuffed U.S. pressure to curb its activity in the South China Sea on Sunday, restating its sovereignty over most of the disputed territory and saying it “has no fear of trouble.”

On the last day of Asia’s biggest security summit in Singapore, Admiral Sun Jianguo said China will not be bullied, including over a pending international court ruling over its claims in the vital trade route.

“We do not make trouble, but we have no fear of trouble,” Sun told the Shangri-La Dialogue, where more than 600 security, military and government delegates had gathered over three days.

“China will not bear the consequences, nor will it allow any infringement on its sovereignty and security interest, or stay indifferent to some countries creating chaos in the South China Sea.”

The waterway has become a flashpoint between the United States, which increased its focus on the Asia-Pacific under President Barack Obama’s “pivot,” and China, which is projecting ever greater economic, political and military power in the region.

The two powers have traded accusations of militarizing the waterway as Beijing undertakes large-scale land reclamation and construction on disputed features while Washington has increased its patrols and exercises.

On Saturday, top U.S. officials including Defense Secretary Ash Carter warned China of the risk of isolating itself internationally and pledged to remain the main guarantor of Asian security for decades.

During a visit to Mongolia on Sunday, U.S. Secretary of State John Kerry urged Beijing not to establish an air defense identification zone over the South China Sea, as it did over the East China Sea in 2013.

Kerry, who will visit China next, said an ADIZ would be “a provocative and destabilizing act,” which would question Beijing’s commitment to diplomatically manage the dispute.

Despite repeated notes of concern from countries such as Japan, India, Vietnam and South Korea, Sun rejected the prospect of isolation, saying that many of the Asian countries present at the Shangri-La Dialogue were “warmer” and “friendlier” to China than a year ago. China had 17 bilateral meetings this year, compared with 13 in 2015.

“Actually I am worried that some people and countries are still looking at China with the Cold War mentality and prejudice. They may build a wall in their minds and end up isolating themselves.”

On the upcoming decision by the international tribunal in The Hague in the case brought by the Philippines to contest China’s claims in the territory, Sun reiterated Beijing does not recognize the court’s authority.

Sun said China wanted to solve the dispute with the Philippines bilaterally and said the door was open for dialogue with incoming President Rodrigo Duterte.

Duterte said on Thursday he would not surrender the country’s rights over the disputed Scarborough Shoal in the South China Sea, which China seized in 2012.

Japan’s Minister of Defense Gen Nakatani told reporters all claimants must abide by the ruling or else “Japan will have no choice but to strongly raise its voice from the standpoint of placing importance on the rule of law.”

“China has the patience and wisdom to settle any disputes through dialogue. We also believe the related countries have the wisdom and patience to make peace,” Sun said. “I’ve always believed that shaking hands is better than clenching fists.”

Most countries at the summit stressed the importance of freedom of navigation and overflight in the waters, through which trillions of dollars in trade is shipped every year.

Sun denied such concerns should be focused on China.

“If there is any restriction …it will definitely not be China’s fault. If you don’t believe it, just wait and see.”