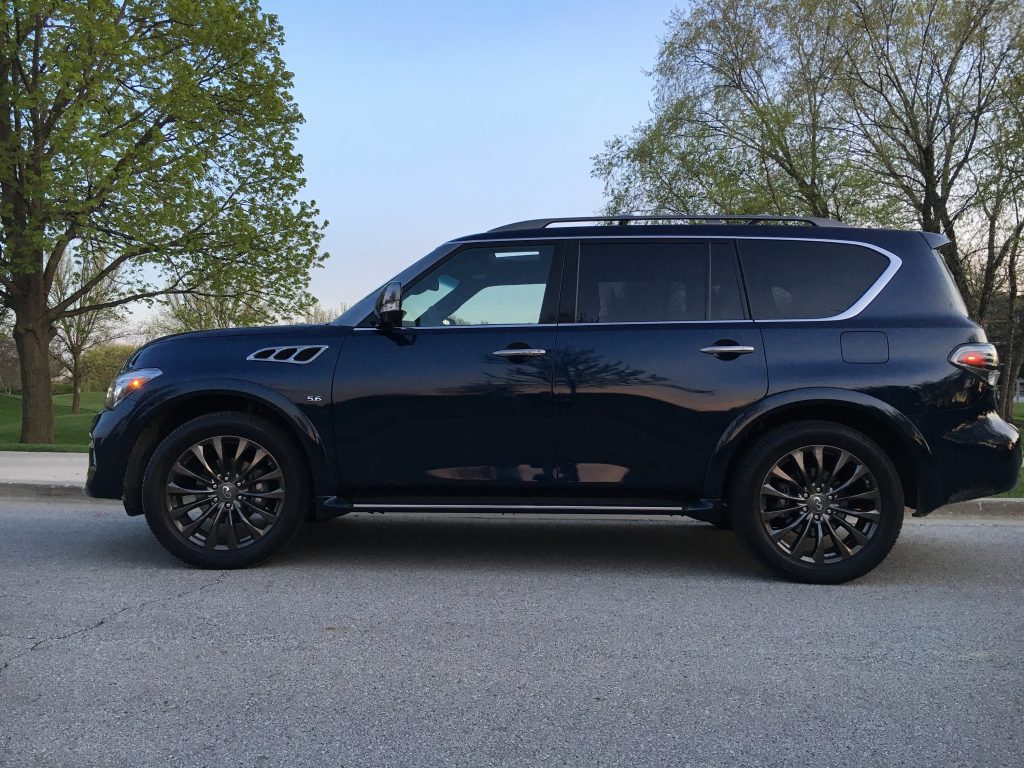 Some objects are larger than they appear: Professional basketball players, locomotives, the Grand Canyon.

Add the Infiniti QX80 to the larger than life list. So large it didn’t fit in a 2.5-car garage; so large my 9-year-old said to paint it green and put a gun on top; so large the passengers needed grunts, handles and hoists to climb aboard. It outsizes the GM competition in height and headroom, so it could comfortably fit a starting basketball team and the coach.

The only larger full-size SUVs are the extended versions of the GMC Yukon and Ford Expedition.

It isn’t just humongous, it’s luxurious too, with soft, quilted leather seats, fine ash wood on the dash and doors and dual in-seat screens, as well as heated and ventilated mid-row seats.

But largely, front to back, top to bottom, Infiniti’s best-selling SUV is large.

From the outside it’s loud. On start-up, the 5.6-liter V-8 engine yawns for a good few minutes. Paired to a seven-speed automatic transmission, the beautiful beast generates 400 horsepower and 413 pound-feet of torque, good enough to tow 8,500 pounds, or the opposing team and its staff.

Once inside it is remarkably smooth and quiet for a frame typically used on pickups.

A brief history: Up until 2014, Infiniti called its full-sized SUV the QX56 for the same sized engine it’s been using since it debuted for model year 2004. That vehicle, and the less luxurious Nissan Armada, were based on the Nissan Titan full-size pickup truck.

The first (and only) full redesign came for model year 2011, when parent company Nissan switched the QX56 off the Titan platform to the global Nissan Patrol, which is a large off-road beast that has been tearing through the wild open spaces of Australia and other continents since the late 1950s. The 2017 Nissan Armada is redesigned off the Patrol platform as well.

What’s new: New for 2015 was the top of the line Limited trim that we had in our tester. New for 2016 was hermosa blue, or dark blue, paint coat that looked black at night, blue in light.

Not a truck: The body-on-frame construction, which once upon a time distinguished SUVs from cars when SUVs were SUVs and crossovers were limited to the basketball court, has all sorts of noise-deadening elements that make it sound, if not move, much lighter than its 5,900-pound body. Independent double-wishbone suspension on both axles also gives it a more cushioned carlike feel, while also helping it stay more planted on the road.

While the QX80 is off-road capable, the 22-inch black wheels, running board lighting and cushy interior might make owners think twice about mucking up their $90,000 mammoth.

Soft leather pads the Limited trim, from door handle hoists to the truffle brown steering wheel. The wide, quilted seats are all kinds of comfortable, yet lack the lumbar flexibility of other luxury models. In truck-like fashion, the center console is about as wide as a seat, and was repeated in the second row in our seven-seat configuration.

Access to the uncompromised third row is handled with a latch that may need adult activation for the smallest passengers. Those grade-school types are fully consumed by the third row, which can offer some road-trip serenity up front. Built-in dual screens in the seat backs also deliver serenity now.

The hauling of not just families but their things is made effortless by power controls to operate the 60/40 split-folding third row. Controls are in the center stack, or near the side cup holders for the mid- or rear-seat passengers. Controls are also in the hatch.

The ride is nice, if you can stomach the guilt.

An assault on nature comes naturally for a vehicle this large, especially when it averages less than 13 mpg around town and 16 mpg at speeds over 60 mph. The EPA rating of 15 mpg combined is the worst in this large, endangered breed and suggests that the outdated gas guzzler tax should apply to all passenger vehicles, rather than excluding SUVs and minivans.

The QX80 allows for living large in luxury, but it’s a load.