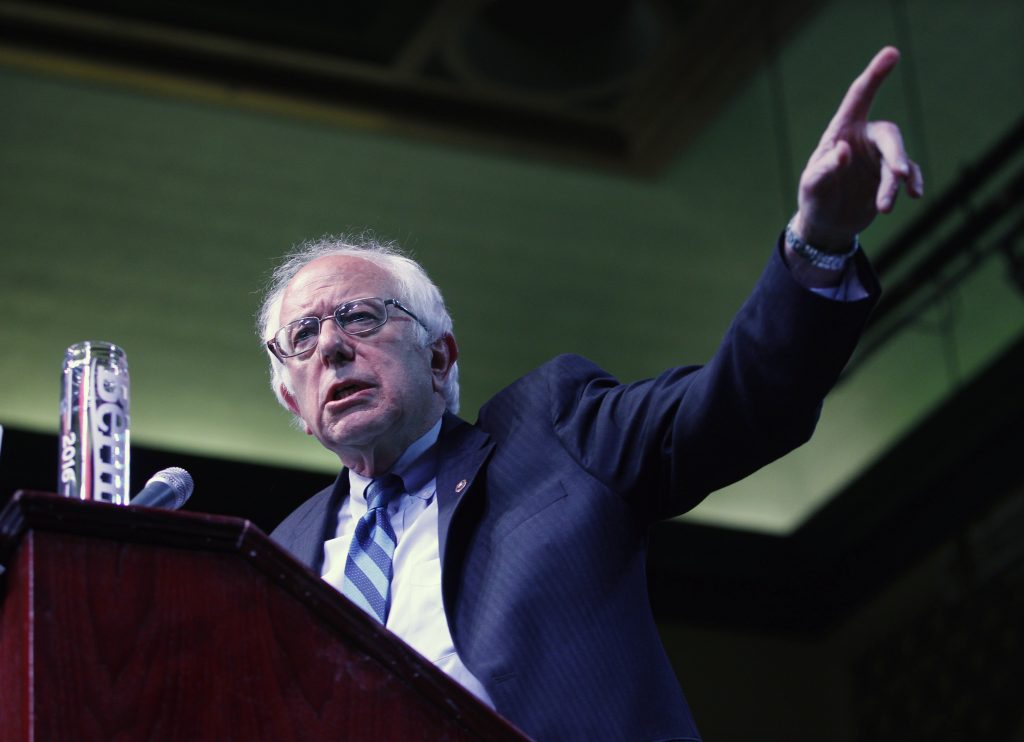 Bernie Sanders’s political revolution — and how far he’s willing to take his presidential campaign — may hinge on the outcome of the California primary Tuesday, with Hillary Clinton poised to clinch the Democratic nomination in the coming days.

Sanders is showing few signs of surrender as the end of the primaries loom, pointing out his differences with Clinton and vowing to take his bid to the party’s convention in July.

A Sanders victory in California’s primary would be an embarrassment for Clinton and embolden the Vermont senator to aggressively lobby superdelegates — elected and party officials — to switch their support to him. Clinton has begun forcefully defining Trump on national security and temperament for the White House, but Sanders refuses to yield as California polls narrow.

Speaking to reporters in Los Angeles Saturday, Sanders said that the Democratic National Convention will be contested, predicting that the winner of the Democratic nomination will need to rely on superdelegates to reach the magic number. He called the nomination process “deeply flawed,” adding that whether he wins the nomination or not, he will do everything he can to change it.

But Sanders seemed an afterthought to a confident Clinton as she campaigned this week in California, hitting hard at her likely general election rival, Donald Trump, instead, and telling supporters Friday that “if all goes well, I will have the great honor as of Tuesday to be the Democratic nominee for president.”

Still, Sanders is expected to return to his Vermont home on Wednesday and advisers say he intends to ramp up his courtship of the party’s superdelegates, a process that is already underway, pointing to polls that show him faring better than Clinton in head-to-head matchups with Trump.

Sanders will compete in the District of Columbia primary on June 14, the final contest. Beyond that, Sanders’ campaign manager Jeff Weaver said they are considering whether Sanders might appear at more rallies around the country after the primaries and speak in Chicago at a gathering of Sanders’s activists on June 17-19.

But a loss in California, the nation’s most populous state, would undercut his case against Clinton, who holds a commanding lead among the elected leaders and party officials who formally cast their support at the convention. She is expected to clinch the nomination after contests in the Virgin Islands and Puerto Rico this weekend and California, New Jersey and four other states on Tuesday.

Superdelegates have historically backed the candidate who wins the most delegates from primaries and caucuses.

“Once the numbers come in, I think we can begin a serious discussion among ourselves about what the right path for us is,” said Tad Devine, Sanders’ senior adviser. He added: “If he wins California and a lot of states, he’ll want to make a closing argument to the superdelegates.”

Sanders plans to push for his policy views to be included in the party’s platform, including steps to rein in Wall Street and overhaul the campaign finance system. He also wants the party to become more inclusive of independent and working-class voters and make it easier for independents to vote in future primaries.

Recalling her own campaign in 2008, Clinton’s team has avoided urging Sanders to leave the race. But if Sanders loses California, he’s likely to face pressure to drop out.

Senate Democratic leader Harry Reid of Nevada told The Associated Press in an interview earlier this week that “sometimes you just have to give up,” a sign of what could come next.

“The numbers aren’t going to lie and I think Senator Sanders will recognize the value in seeing his ideas and principles march forward when it’s a one-on-one race between Hillary Clinton and Donald Trump,” said Rep. Xavier Becerra, D-Calif., a top Clinton surrogate.

Sanders has said he will work “day and night” to defeat Trump, whom he repeatedly assails as a divisive figure. Yet few expect Sanders to quickly follow the example set by Clinton, who suspended the roll call vote at the 2008 Democratic convention and urged that then-Sen. Barack Obama be nominated by acclamation. She later campaigned extensively for him and became his secretary of state.

Said Weaver: “Given what he has said I suspect there will certainly be a roll call vote at the convention.”

Democrats have several ways to exert leverage over Sanders. Neither Obama nor Vice President Joe Biden have endorsed Clinton but their nod of approval would send a strong signal to Democrats and could marginalize Sanders’s quest to push forward into the convention.

The AFL-CIO, the labor federation representing 12.5 million workers, has also withheld an endorsement but could send a powerful message to union members by backing Clinton. And progressive icons like Massachusetts Sen. Elizabeth Warren, who has stayed neutral in the primaries, could help bridge the gap between Sanders and Clinton loyalists.

Going forward, Sanders could turn his movement into a fundraising powerhouse for like-minded Democrats. He has raised more than $212 million, mostly online, and begun sending out fundraising emails on behalf of candidates like former Wisconsin Sen. Russ Feingold and a host of congressional and legislative hopefuls.

Sanders’s faithful supporters predict healing will come in due time. “I would like to see unity at the end of the cycle and I think we’ll get there,” said Lupita Maurer, a Sanders’ superdelegate in Oregon. “I’ve talked to him and I hear nothing bellicose or belligerent about him. I think he will keep his promises.”