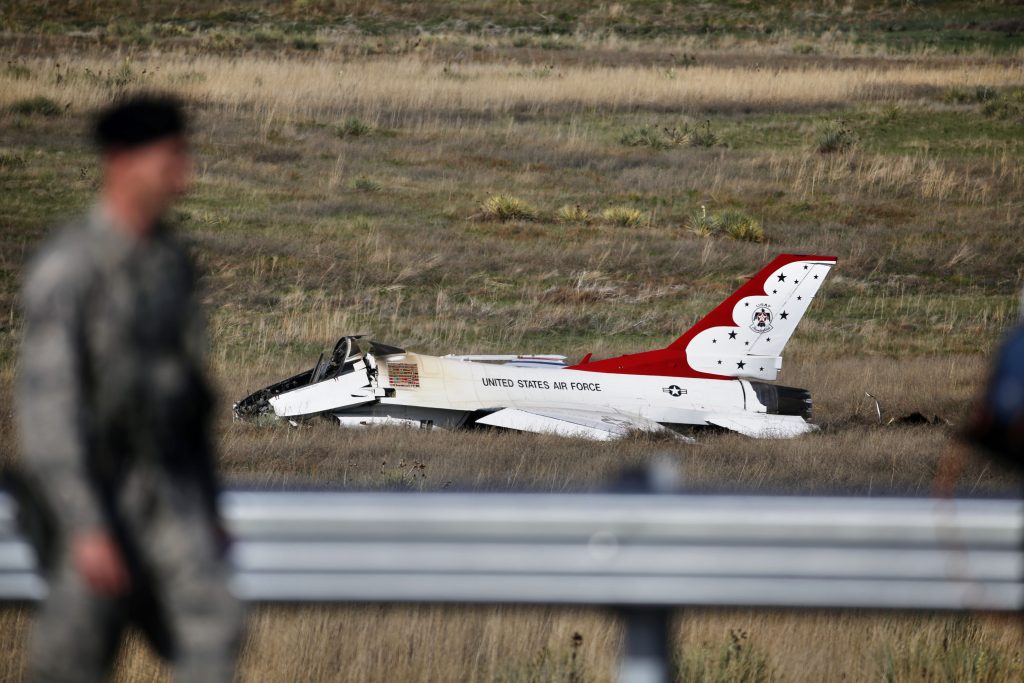 Two fighter jets from elite U.S. military demonstration squadrons crashed in separate incidents on Thursday, including one that had just done a flyover of the Air Force Academy graduation in Colorado where President Barack Obama had spoken.

In Tennessee, a pilot from the Navy’s Blue Angels squadron was killed when his F/A-18 jet crashed in Smyrna, about 24 miles southeast of Nashville, a Navy spokeswoman said.

The crash occurred about 2 miles from an airport runway while the Blue Angels were practicing for a weekend air show, the Navy said, adding that the cause of the crash was being investigated. The pilot’s name was not made public.

In Colorado, a pilot with the Air Force’s Thunderbirds squadron was unhurt when his F-16 jet crashed in a field 5 miles south of Peterson Air Force Base, the Air Force said.

The pilot, whose name was not released, ejected safely and was picked up by emergency response crews, the Air Force said.

White House spokesman Josh Earnest said a military helicopter that had been supporting Obama’s motorcade on the drive back to Peterson AFB peeled off to find the crash site.

A Secret Service agent on board who is also an emergency medic assessed the pilot, who was then flown to Peterson. The helicopter then resumed its mission in support of Obama’s motorcade.

Obama later visited the Thunderbird pilot at Peterson to thank him for his service and express relief he had not been seriously hurt, Earnest said. The pilot was up and walking around when the president saw him. The president also thanked the emergency responders who picked up the pilot.

The cause of the crash was not immediately known and the Air Force said it would undertake an investigation. The Air Force’s Air Combat Command said on social media that no one was hurt on the ground and there was no hazard to the public.