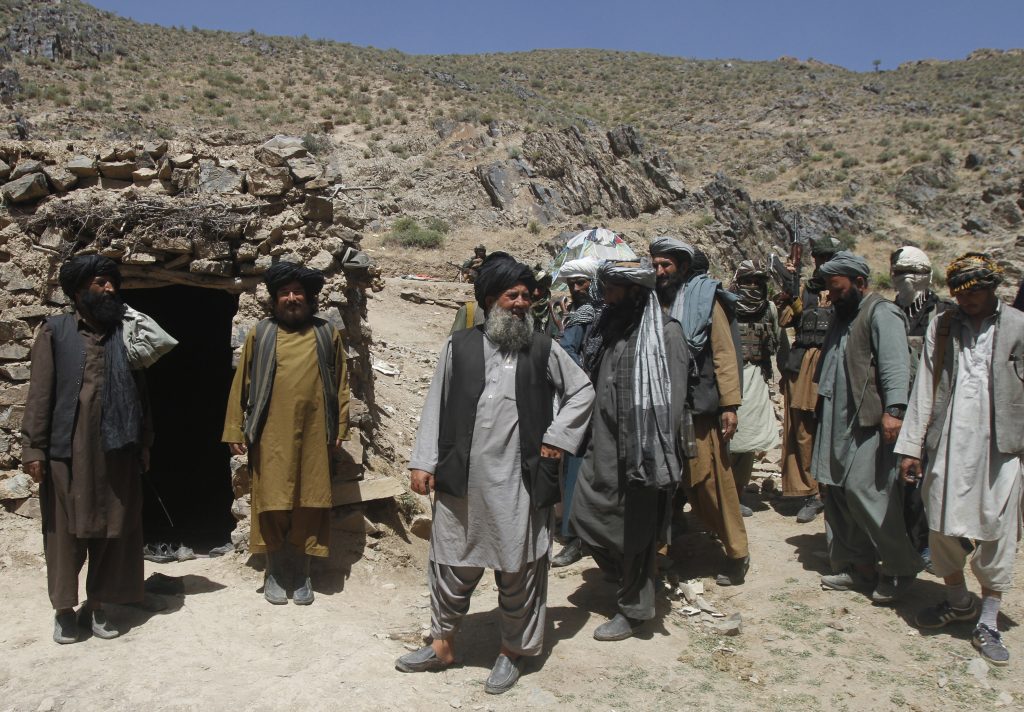 In the rugged terrain of the Taliban heartland in southern Afghanistan, the fight against Kabul has become a war for control of key stretches of main roads and highways as the terrorists use a new tactic to gain ground.

First they storm a checkpoint, kill all the policemen, seize their weapons and equipment and effectively cut off the main road to a remote village. They raise the white Taliban flag and plant roadside bombs to prevent cars from coming through the checkpoint. Any vehicle that attempts to pass through is either blown up or attacked, residents and local leaders say.

Then they wait. Faced with shortages of basic food items and price hikes as their supplies dwindle, the villagers are eventually forced to abandon their homes and to move to a place where they can afford to eat and live. Most sneak out on foot or on donkeys through backroads and mountain paths, leaving many of their belongings behind.

Though the new tactic may be obviously simple, it has helped the Taliban gain ground — albeit at a slower pace than a deadly, surprise raid on an entire village.

The Taliban have been waging war against the Kabul government since 2001, when their regime was overthrown in the U.S.-led invasion. Since the international combat troops pulled out of Afghanistan at the end of 2014, leaving behind only a largely training and advising contingent, the terrorism has intensified as Afghan forces struggle to take the lead in the battle.

The Taliban are now refocusing their attention mostly on the southern provinces of Helmand, Kandahar and Uruzgan, U.S. and Afghan military officials say, although the terrorists have also struck elsewhere, such as the northern Kunduz province where they briefly overran and held the provincial capital for a few days last fall.

The results have been daunting — the United Nations says 3,545 Afghan civilians were killed and 7,457 wounded in the war in 2015, most of them by the Taliban.

In the south, one of the worst hit areas is Uruzgan province where the Taliban have been putting pressure in recent weeks on Afghan forces around the provincial capital of Tirin Kot, said the U.S. military spokesman in Kabul, Brig. Gen. Charles Cleveland.

“The Taliban’s main focus in the south is now Uruzgan” and U.S. forces have been providing assistance and air support as needed, Cleveland said.

The director of Uruzgan’s provincial council, Abdul Hakeem Khadimzai, described the situation there as the “worst in 15 years.” In May alone, he said, “around 200 security forces were killed and more than 300 were wounded” in Uruzgan.

The figures are an estimate but Khadimzai insisted that if he were to “include civilians, then they would be doubled.” The numbers could not be independently verified as the Afghan government does not release military and police casualty figures.

“Every day our forces are stepping back and every day the Taliban are controlling more and more area,” Khadimzai said. “Our security forces are trying their best to control the area but they can’t because logistics supplies are not delivered on time.”

Uruzgan residents and local community leaders say the highway connecting Tirin Kot to the city of Kandahar, the capital of neighboring Kandahar province — 100 miles away — has been closed since March. And the road linking Khas Uruzgan district with the rest of the province has been blocked for about a year.

With the Taliban gaining ground, the government-controlled area has shrunk. Khadimzai describes Tirin Kot now as an “island of government control disconnected from the rest of the province.”

The closures have sent the price of staples more than double in some areas, he said.

In Khas Uruzgan, Dihrawud and Charchino districts, the cost of wheat is now 3,200 afghanis ($47) for a sack of 100 pounds, compared to 1,900 afghanis elsewhere in the country. Cooking oil is 540 afghanis for a container of 6 lb. 9 oz., compared to the national average of 260 afghanis.

Most fresh produce is grown locally but growers in cut-off areas cannot get to the markets to sell their goods, according to Aminullah Hotaqi, a tribal elder and former Uruzgan council chief.

The U.N. Mission in Kabul says that between Jan. 1 and April 30 this year, “117,976 people fled their homes due to conflict” in 24 of the country’s 34 provinces. Amnesty International said this week that the number of internally displaced people in Afghanistan has doubled in three years, to 1.2 million.

A Tirin Kot taxi driver says the road closures have hit him hard — he no longer has any business taking people outside the city but nor do any other taxi drivers, so the competition inside the city is fierce and his earnings have plummeted.

“Now I can’t afford to buy fuel; how am I going to feed my children,” he said, speaking on condition of anonymity fearing for his safety. Like other residents in the area, he spoke to The Associated Press over the telephone.

Akhundzada’s deputies — Mullah Yaqoub, son of Taliban founder Mullah Mohammad Omar, and Sirajuddin Haqqani, who heads a brutal faction designated by the U.S. as a terrorist group — are expected to escalate the violence as Akhundzada moves to consolidate his position at the helm of the insurgency.