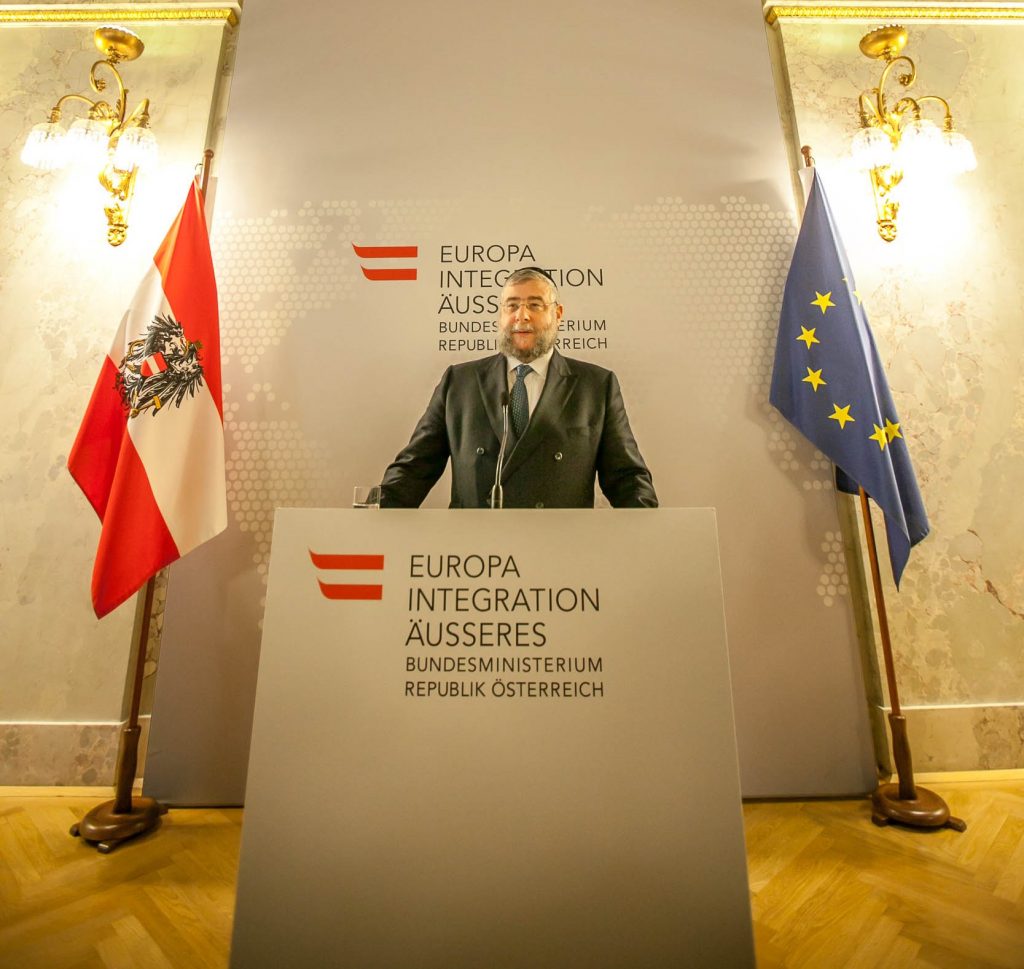 The rising tide of nationalist, anti-immigrant parties in Europe have won the votes of many Jewish voters through the continent, said the president of the Conference of European Rabbis (CER), Rabbi Pinchas Goldschmidt. He went on to warn of what he saw as the dangers of such parties gaining increased mainstream acceptance.

The remark was made in an interview with Reuters during a gathering of CER’s Standing Committee in Vienna, where Freedom Party candidate Norbert Hofer narrowly lost an election for Austria’s presidency.

“I understand that, most probably, a not insignificant part of the [Jewish] community here voted for Hofer for the presidency,” he told Reuters.

The next day, Rabbi Goldschmidt explained to Hamodia that while the number of Jewish votes being attracted by far-right parties may not be a determining factor in elections, the trend could go a long way in helping such politicians gain main-stream legitimacy.

“Jews in Europe do not make up a major part of the electorate — it’s not our numbers that matter — but for Jews to endorse these parties helps them to shed the association of Nazism from their movement.”

While many such political groups have been careful to avoid anti-Semitic rhetoric in recent years, Rabbi Goldschmidt maintained that the “racist” core of their ideology should still place them beyond the pale of acceptability.

“They put all people together because of a race or a religion. Their premise is that all Muslims are a threat, which is not true. Moderate Muslims face greater danger from the extremists than we do; they’re our natural allies.”

Even recent challenges to Torah education, bris milah and shechitah in Europe, he said, are “collateral damage” from the backlash against Muslim populations, which has given fodder to anti-religious trends in general.

Amidst a rising tide of threats from radical Muslim elements, skepticism over what many see as a lack of boarder control and economic inflexibility brought on by the EU, and the ongoing migrant crisis, nationalist and anti-immigrant voices in Europe have been gaining ground. Hofer came only a few percentage points short of becoming the first candidate tagged as far-right to win national office.

Marine le Pen, the leader of France’s National Front, has fought several public battles to disassociate her party from its founder, her father Jean-Marie le Pen, whose rhetoric of anti-Semitism and Holocaust denial kept the movement on the political fringe.

Rabbi Moshe Lewin, CER’s executive director who leads a shul in Paris, said that while the leaders of the French Jewish community remain united against the National Front, many individuals who live in suburbs with an increasing presence of radical Muslim elements have been attracted to their platform.

“They feel the right will deliver them from the Islamists, and it is not so easy to convince them otherwise,” he said. “Le Pen is trying to divorce her father and soften her image, but it’s all PR. The party’s leaders are all the same people as under him [the elder le Pen], nothing real has changed.”

In Great Britain, the UKIP (UK Independence Party) has made tremendous inroads with its calls for exiting from the EU and strengthening immigration policies. The group has been free of racist policies and even nominated Jewish candidates for office.

Rabbi Avraham Pinter, head of Yesodei haTorah schools in London and a community askan, said that despite being more moderate than their counterparts in continental Europe, that UKIP still poses potential threats to Britain’s Jews.

“Their anti-immigration stand makes me very uncomfortable; one gets the feeling they could eventually be against any kind of foreigner,” he said. “Another concern is that I don’t believe that they would think twice about banning milah or shechitah.”

As in many countries, Rabbi Pinter said that the UKIP have pushed mainstream parties to take a harder line on immigration policies.

“They [UKIP] have a message that resonates with a lot of people and its challenging all the parties,” he said. “It’s very early to judge what effect any of this will have on Jewish life, but for now the threats to our educational system from the secularists and the like poses a much greater danger to the community.”