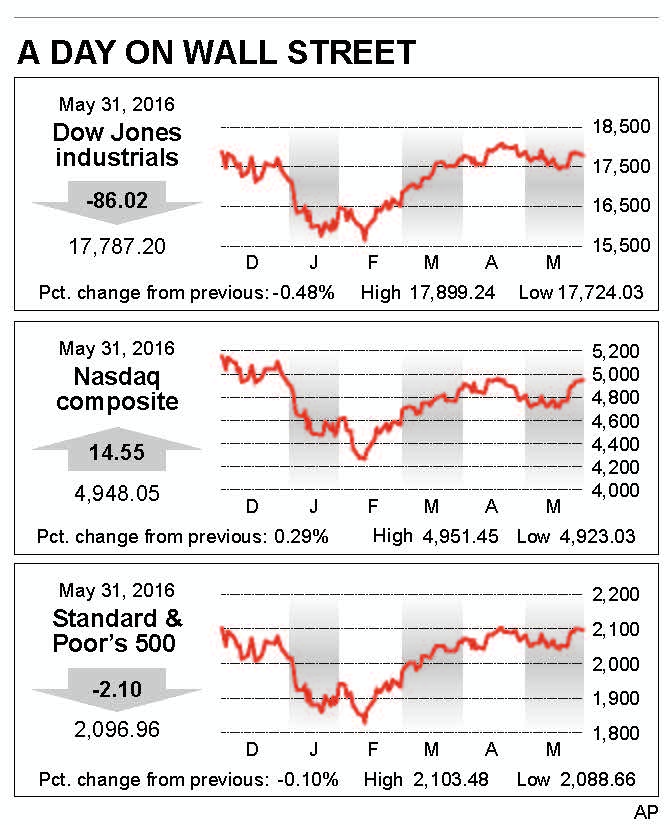 U.S. stock indexes struggled to a mixed close Tuesday as energy companies fell with the price of oil, overcoming gains in utilities and phone companies.

Stocks were lower for most of the day after the Conference Board said consumer confidence fell for the second month in a row and reached its lowest level in six months.

In the afternoon stocks fell further following comments from the energy minister of the United Arab Emirates, the second-largest Arab economy. His remarks suggested there isn’t a lot of urgency in addressing a global glut in oil supplies. Despite the losses, stocks finished May with solid gains.

The price of oil has almost doubled since early February, and U.A.E. Energy Minister Suhail al-Mazroui said he is “optimistic” about the state of the energy market. Ministers from OPEC nations will meet in Vienna this week.

Meanwhile investors searched for a sense of how consumers, who drive a large portion of the U.S. economy, are behaving. The Commerce Department said consumer spending rose 1 percent in April as purchases of cars and other long-lasting goods increased. Wages and salaries, the most important component of incomes, gained 0.5 percent. That suggests the U.S. economy could pick up in the second quarter after six months of sluggish growth.

Economists at the Conference Board said consumer confidence fell for the second month in a row and reached its lowest level since November. The board said consumers are feeling cautious about business and job market conditions, and they anticipate little change in the months ahead. That was a surprise since a similar survey by the University of Michigan on Friday showed consumers were the most optimistic they’ve been in a year.

Despite the dip in consumer confidence, Erik Davidson, the chief investment officer for Wells Fargo Private Bank, said Americans are gradually spending more and getting over the shocks of the financial crisis and Great Recession.

“There’s probably never been a better time to be a consumer than right now,” Davidson said. He noted that the job market remains solid, wages are inching higher and a strong dollar is making goods produced overseas less expensive.

Jazz Pharmaceuticals said it will buy cancer drug developer Celator Pharmaceuticals for $30.25 per share, or $1.28 billion. Celator’s most advanced drug is Vyxeos, a potential treatment for acute myeloid leukemia. Jazz also makes cancer drugs but gets most of its revenue from Xyrem, a drug used to treat side effects of narcolepsy. Celator soared $12.55, or 71.6 percent, to $30.08 and Jazz stock lost 53 cents to $151.56.