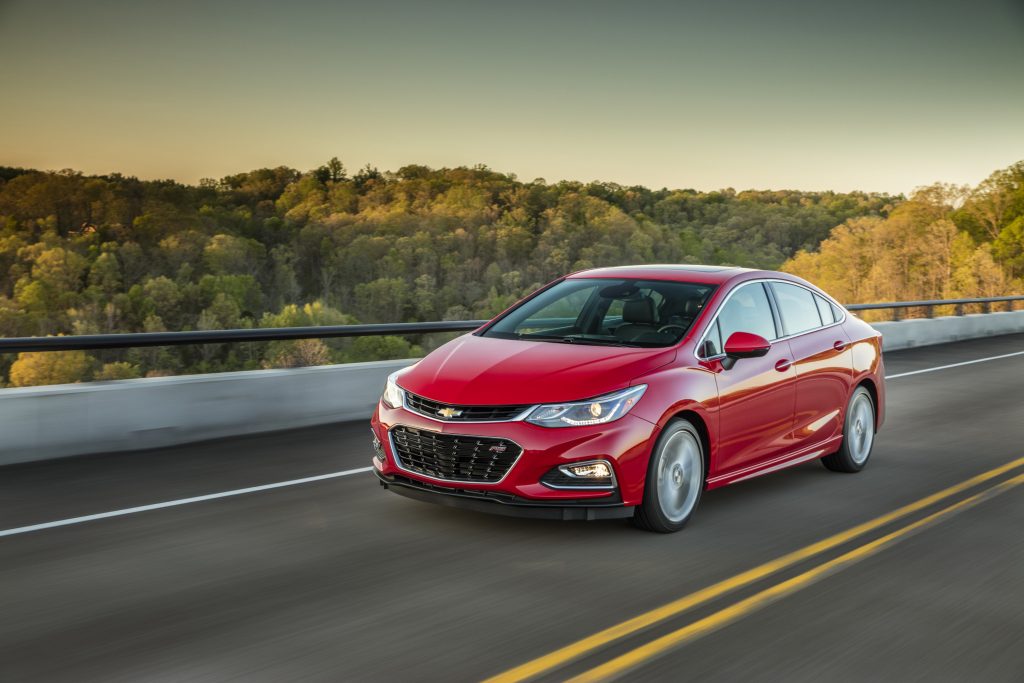 Thinking of the compact Chevrolets fielded over the decades is like reviewing a litany of punch lines to bad jokes. Their names are so infamous, they need no further explanation: Corvair, Vega, Monza, Nova, Chevette, Cavalier and Cobalt. Finally, in 2010, the Chevrolet Cruze ended four decades of crummy compacts.

So you have to wonder if General Motors executives truly love the Cruze name, or if they’re trying to confuse shoppers. That’s because Chevrolet is offering an all-new, redesigned Cruze compact sedan for 2016 while simultaneously offering the old, outgoing model as the Cruze Limited.

And while the two models share names, engine displacement, and a starting base price, the new one is far superior.

The 2016 Cruze has a wheelbase and longer profile, which give it a sleeker, stylish look much like a shrunken Malibu. Yet it weighs as much as 250 pounds less than its older sibling while gaining 15 horsepower and 52 pound-feet of torque. The added oomph doesn’t come at the expense of fuel economy, as the ratings are up by 5 mpg for city driving and 6 mpg on the highway.

There’s also more cabin space than before, even though the vehicle’s overall height has been reduced, compromising rear headroom. Thankfully, rear seat legroom and knee room are far more generous than before.

Overall cabin ambience is far more sophisticated, with a flowing design accented with metallic trim and soft touch materials. The switchgear feel is impressively firm. The steering wheel is especially handsome and, on the top-of-the-line test car, wrapped in leather and possessing easy-to-use steering wheel controls. Thoughtfully, the steering wheel can be heated, as can the seats, adding a touch of luxury. And kudos for the shortcut buttons beneath the infotainment screen.

There are glitches. The speedometer has hash marks that are hard to decipher at a glance. And while the cabin possesses a number of places to stash things, it has a phone cradle by a wireless charging pad, made of incredibly hard, cheap plastic with various pieces misaligned. The audio system sounds fairly good, although it had trouble holding a signal. It was the worst performance in recent memory. Skip it and use your favorite streaming service instead via Apple CarPlay or Android Auto.

Otherwise, you will be comfortable.

The seats prove so during long stretches in the saddle, which is fairly flat, discouraging spirited driving. Pedal placement isn’t ideal, as the throttle is mashed up against the center console while the brake pedal is easily two or three inches closer to the driver.

The only engine is a redesigned turbocharged double overhead-cam 1.4-liter gas engine with an aluminum block and stop-start technology. There’s enough power to produce a 0-60 mph time of 7.7 seconds. The smooth automatic transmission upshifts too soon when going uphill, favoring fuel economy over driving fun. But that’s not surprising. This car clearly doesn’t like to be rushed, returning its best results with slow, smooth gradual inputs. Piloting the Cruze aggressively doesn’t make it any more fun.

The suspension is a good blend of riding comfort and controlled body motions, although more extreme roads bring out more body motions. Consider the car’s behavior confident, not sporty. The steering is nicely weighted with good on-center feel and a turning radius that’s surprisingly compact for a front driver. The cabin remains quiet, although tire noise is present, like white noise.

Safety doesn’t excite you? Perhaps the sensibly shaped trunk will. It looks bigger than its generous 13.9 cubic foot rating, although it’s cheaply trimmed, with one miserly grocery bag hook, even in the top-of-the-line Premier.

While not the track star of the class like the Honda Civic or Mazda3, the Cruze is an aptly named cruiser, clearly superior to the model and as good or better than many of its competitors.

Go ahead, make a joke if you must; Call it Ted Cruze and snicker. But a new Cruze owner has the last laugh. Most likely, it’s better than your compact, and that’s no joke.