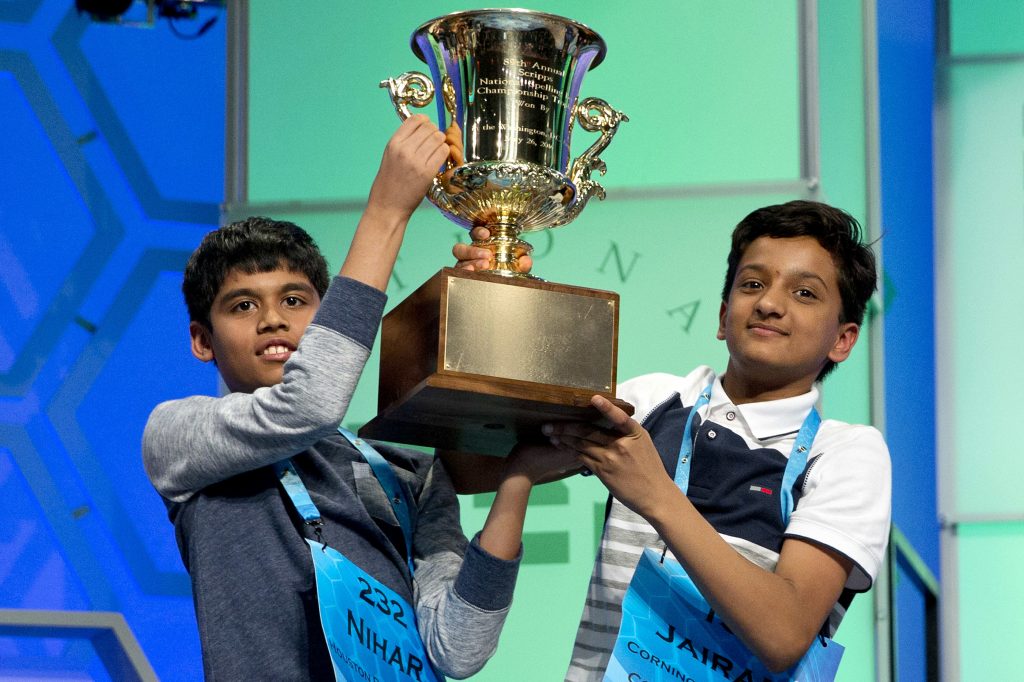 If not for his high-pitched voice, there would be no way to peg Nihar Janga as the youngest-ever winner of the Scripps National Spelling Bee.

The 11-year-old breezed up to the microphone with confidence, and he knew most of his words right away. He looked like the strongest speller onstage, stronger even than his eventual co-champion, 13-year-old Jairam Hathwar, a blue-chip speller whose older brother hoisted the trophy two years ago.

At his best, Nihar turned the tables on bee pronouncer Jacques Bailly by shouting out the definitions of his words as soon as they were announced.

“Is this the Breton bagpipe?” Nihar said.

After the crowd quieted, Bailly asked Nihar if he wanted the word used in a sentence. Nihar just shook his head.

But Nihar wasn’t perfect, and he stumbled at just the wrong time – or perhaps the right time. Twice, Jairam missed a word, giving Nihar a chance to seal the title. Both times, Nihar followed up with his own flub. After each nailed his final two words, Nihar, from Austin, Texas, and Jairam, from Painted Post, New York, were declared co-champions. It was the third consecutive year that the bee ended in a tie.

Bee organizers insisted they’d be okay with another tie, but they changed the rules to make it less likely. Instead of a pre-determined list of 25 “championship words” for the final three spellers, the bee instead forced the top three to go through up to 25 rounds. And the difficulty of the words could be adjusted as necessary.

Third-place finisher Snehaa Kumar of Folsom, California, bowed out in the first championship round. Nihar and Jairam had to spell 24 words apiece before it was over.

Nihar and Jairam have grown close over the past year, communicating mostly online. They chatted while others were spelling, high-fived after their words and embraced after they won. The timing of Nihar’s misses was almost too perfect to believe, and Nihar denied afterward that he misspelled on purpose. He said he just didn’t know the words.

“I wanted to win, but at the same time, I felt really bad for Jairam,” he said.

It was the second straight year that a sibling of a past champion won the bee. Jairam’s brother, Sriram, was a 2014 co-champion. Sriram, too, got a reprieve when his co-champion Ansun Sujoe missed a chance at the solo title.

“Deja vu,” Sriram said. “I thought it was over, because Nihar is so strong, such a great speller.”

The words were as tricked-up as ever. Because the best spellers become fluent in Latin and Greek roots, the bee went to words from languages with less infiltration into English, including Afrikaans, Danish, Irish Gaelic, Maori and Mayan.

Jairam’s winning word was Feldenkrais, which is derived from a trademark and means a system of body movements intended to ease tension. Niram won with gesellschaft, which means a mechanistic type of social relationship.

Each receives $45,000 in cash and prizes. Snehaa takes home $20,000 for finishing third, and Sylvie Lamontagne of Lakewood, Colorado, got $10,000 for fourth place. Snehaa and Sylvie are 13-year-old eighth-graders who have exhausted their bee eligibility.

Nihar was in his first bee and would have had three more years of eligibility, but he can’t compete again since he won. This was the 89th bee, and while Scripps’ records from early years are incomplete, the youngest known champion was Wendy Guey, who won 20 years ago at age 12. The last to win in his first attempt was Pratyush Buddiga in 2002.

Nihar said he didn’t feel pressure to become the youngest winner for two reasons. Firstly, he never expected to win. Secondly, most of the crowd’s attention was on an even younger speller: 6-year-old Akash Vukoti.

“He did pretty good for a first-grader,” Nihar said. “He’s going to go places.”

Nihar and Jairam’s parents are immigrants from south India, continuing a remarkable run of success for Indian-American spellers that began in 1999 with Nupur Lala’s victory. The bee has produced Indian-American champions for nine straight years and 14 out of the last 18.

Both want to be doctors: Jairam hopes to study medicine at Harvard, and Nihar aspires to be a neurosurgeon.

In the meantime, Sriram will have to find a new way to one-up his baby brother.

“We do definitely have our verbal fights, not physical,” Sriram said. “Now, I don’t have that edge over him to say, ‘Oh, at least I’ve won the spelling bee.'”