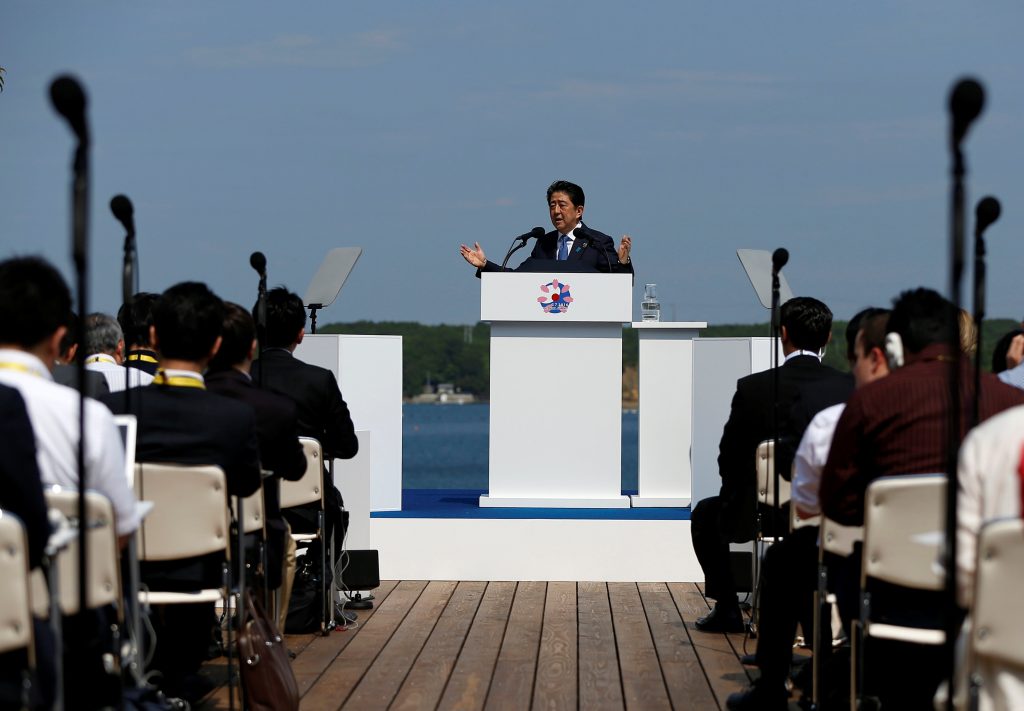 The Group of Seven industrial powers pledged on Friday to seek strong global growth, while papering over differences on currencies and stimulus policies and expressing concern over North Korea, Russia and maritime disputes involving China.

“Global growth remains moderate and below potential, while risks of weak growth persist,” the G7 leaders said after a summit in central Japan, vowing to use “all policy tools” to boost demand and ease supply constraints.

“Global growth is our urgent priority.”

Japanese Prime Minister Shinzo Abe, talking up what he calls parallels to the global financial crisis that followed the 2008 Lehman Brothers bankruptcy, said the G7 “share a strong sense of crisis” about the outlook for the global economy and is committed to concerted action to lift demand.

“The most worrisome risk is a contraction of the global economy,” led by a slowdown in emerging economies, Abe told a news conference after chairing the two-day summit. “There is a risk of the global economy falling into crisis if appropriate policy responses are not made.”

French President François Hollande said while the global economy is not in a crisis, that did not mean it never would be again.

“Today we have dealt with the sources of the previous crisis, and this is the reason why we have been able to acknowledge some improvements,” Hollande told reporters.

For Japan’s part, Abe vowed to “reignite powerfully the engine of Abenomics,” referring to his growth and reflation policies, including a decision before a planned summer election whether to raise the national sales tax again. Government sources told Reuters on Friday the premier will for a second time delay the tax hike as the threat of deflation re-emerges and he prepares to face voters.

Japan’s core consumer prices matched their biggest fall in three years in April, data showed on Friday, while the Reuters Corporate Survey showed Japan’s corporate gloom deepening, with a strong majority of firms expecting no escape from deflation for the foreseeable future.

In a broad-ranging, 32-page declaration, the G7 committed to market-based exchange rates and to avoiding “competitive devaluation” of their currencies, while warning against wild exchange-rate moves.

This represents a compromise between the positions of Japan, which has threatened to intervene to block sharp yen rises, and the United States, which generally opposes market intervention.

The G7 vowed “a more forceful and balanced policy mix” to “achieve a strong, sustainable and balanced growth pattern,” taking each country’s circumstances into account, while continuing efforts to put public debt on a sustainable path.

Abe has stressed the need for flexible fiscal policy to sustain economic recovery, while German Chancellor Angela Merkel has been sceptical about public spending to boost growth.

The group condemned Russia’s “illegal annexation” of the Crimean peninsula from Ukraine. The declaration threatened “further restrictive measures” to raise the costs on Moscow but said sanctions could be rolled back if Russia implemented previous agreements and respected Ukraine’s sovereignty.

The G7 expressed concern over the East and South China Seas, where China has been taking more assertive action amid territorial disputes with Japan and several Southeast Asian nations.

Without mentioning Beijing, the G7 reiterated its commitment to the peaceful settlement of maritime disputes and to respecting the freedom of navigation and overflight. The group called for countries to refrain from “unilateral actions which could increase tensions” and “to settle disputes by peaceful means.”

The G7 also called large-scale immigration and migration a major challenge and vowed to increase global aid for the immediate and long-term needs of refugees and displaced people.

Referring to Britain’s referendum next month on whether to leave the European Union, the G7 said an exit “would be a serious risk to global economic growth.”  The statement will be welcomed by the British government, which has issued a series of warnings about the domestic cost of leaving the bloc if so decided at a June 23 referendum on EU membership.

The leaders pledged to tackle a global glut in steel, though their statement did not single out China, which produces half of the world’s steel and is blamed by many countries for flooding markets with cheap steel.

On climate change, the G7 said they aim to put into effect by the end of the year the Paris climate agreement, in which almost 200 nations agreed to a sweeping plan to end global dependence on fossil fuels in order to limit rising temperatures.