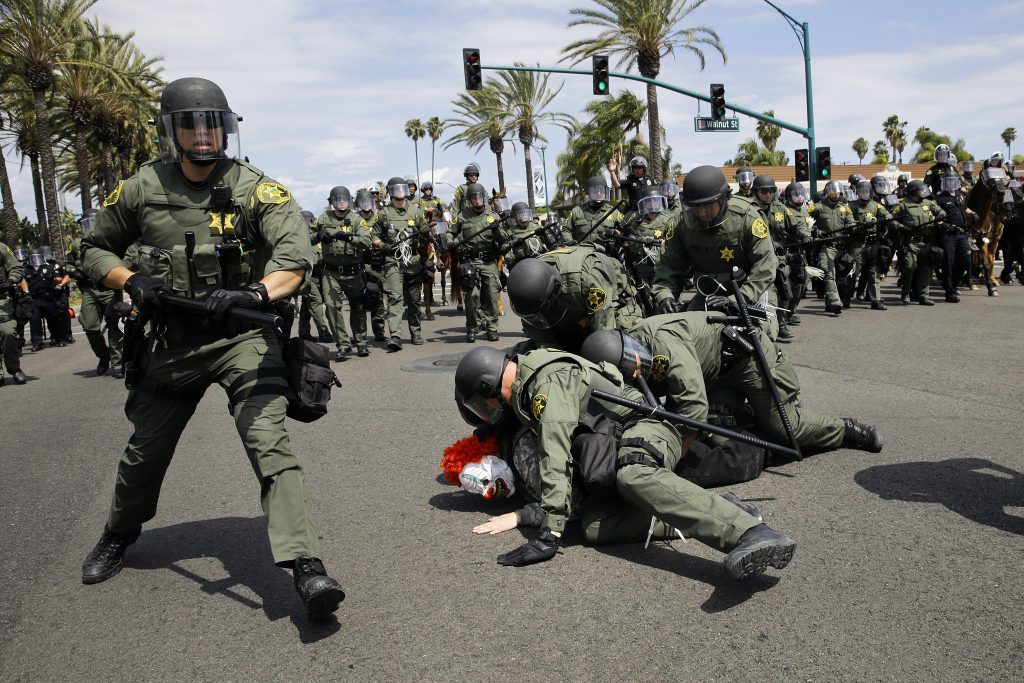 Republican presidential candidate Donald Trump said Wednesday that he often used aliases to purchase real estate — but continued to deny he’d been caught on tape pretending to be an imaginary spokesman in a recently-released recording.

“You know, over the years I’ve used aliases,” Trump said in an interview on ABC that capped a day of campaigning across the Los Angeles area.

Trump has repeatedly denied that he posed as a spokesman for himself decades ago using the names “John Miller” and “John Barron.” But when asked by Kimmel what aliases he’d used, Trump volunteered Barron, which is also the name of Trump’s youngest son.

“I actually used the name Barron,” said Trump, who said he’d made “a very good deal using that name.”

“I used an alias in terms of setting up a meeting with Mr. Donald Trump. And many people in the real estate business do that, you use alias. And you have to, frankly, otherwise they find out it’s you and they charge you more money – and nobody wants to pay more money,” he said.

Trump said he’d used the tactic “especially when I was out in Brooklyn with my father and I’d want to buy something.”

“And honestly nobody knew who Trump was at that time, nobody knew me, so it wasn’t so much so important. But I would never want to use my name because you had to pay money for the land. If you’re trying to buy land, you use different names,” he said.

A day after violent protesters outside a Trump rally threw burning items at police and toppled barricades, Trump’s afternoon rally in Anaheim was boisterous but less heated. He railed against “Crooked Hillary” Clinton and leaders in his own party who haven’t yet endorsed him.

Outside, demonstrators quietly held up signs reading “Love and Peace” and “Migration is beautiful” during the rally, but the modest crowd grew rowdier when Trump supporters came outside. The two sides shouted at each other as dozens of police, some on horseback, moved in to prevent a renewal of the violence Tuesday night in New Mexico.

Five people were arrested as a line of police slowly moved scattered protesters along a nearby street.

Inside, Trump’s rally was interrupted several times by protesters who were escorted out of the Anaheim Convention Center.

“Get ’em out!” he shouted at one point. “Out! Out! Out!” But Trump urged his supporters and security to handle his interrupters gently, saying, “Do not hurt him even though he’s a bad person.”

Trump also used his event Wednesday to hammer Clinton over a State Department inspector general report that faulted her for her use of private email for official business when she was secretary of state.

“She had a little bad news today, as you know. Some reports came down, weren’t so good,” Trump said. “The inspector general’s report — not good.”

Trump’s campaign apparatus was also roiled Wednesday by the abrupt departure of political director Rick Wiley. In a statement, Trump’s campaign said Wiley had been hired only on a short-term basis until the candidate’s organization “was running full steam.”

Wiley had been overseeing hiring of staff in battleground states and working closely with the Republican National Committee. His hiring about six weeks ago was seen as a sign that party veterans were embracing Trump’s campaign.

While Wiley and the RNC have touted the importance of a robust general election infrastructure, Trump has said he plans to continue making his raucous rallies the centerpiece of his campaign.

A person familiar with Wiley’s ouster said the operative clashed with others in Trump’s operation and didn’t want to put longtime Trump allies in key jobs as he hired in battleground states. The person insisted on anonymity because the person was not authorized to publicly discuss the internal campaign dynamics.

Wiley is said to have clashed in particular with Karen Giorno, who ran Trump’s campaign in Florida during the Republican primary, the person said.

“I had no idea it was going to be so nasty,” said Trump, who said he would be happy to take Sanders up on an offer to a one-on-one debate — as long as significant money goes to charity.

“How much is he going to pay me?” Trump asked, predicting the pair “would have such high ratings.”

Sanders said on social media late Wednesday that he would welcome a debate: “Game on. I look forward to debating Donald Trump in California before the June 7 primary.”

Trump’s western swing comes as he works to unify a Republican Party that often remains skeptical of his candidacy. During the rally, Trump offered jabs at 2012 nominee Mitt Romney and former rival Jeb Bush, who have yet to endorse his candidacy.

House Speaker Paul Ryan is still holding out on endorsing Trump even as his staff and other House Republicans and aides communicate more closely with the Trump campaign on policy.

Meeting with reporters Wednesday, Ryan shot down rumors that an endorsement was imminent. “I don’t have a timeline in my mind and I have not made a decision and nothing’s changed from that perspective,” he said.

The violence earlier this week at a rally in New Mexico prompted security concerns beyond California. Police in Bismarck, North Dakota, said Wednesday they would dedicate about a quarter of their force for security when Trump heads to the state Thursday.

Trump will be back in California Friday with visits to Fresno and San Diego.