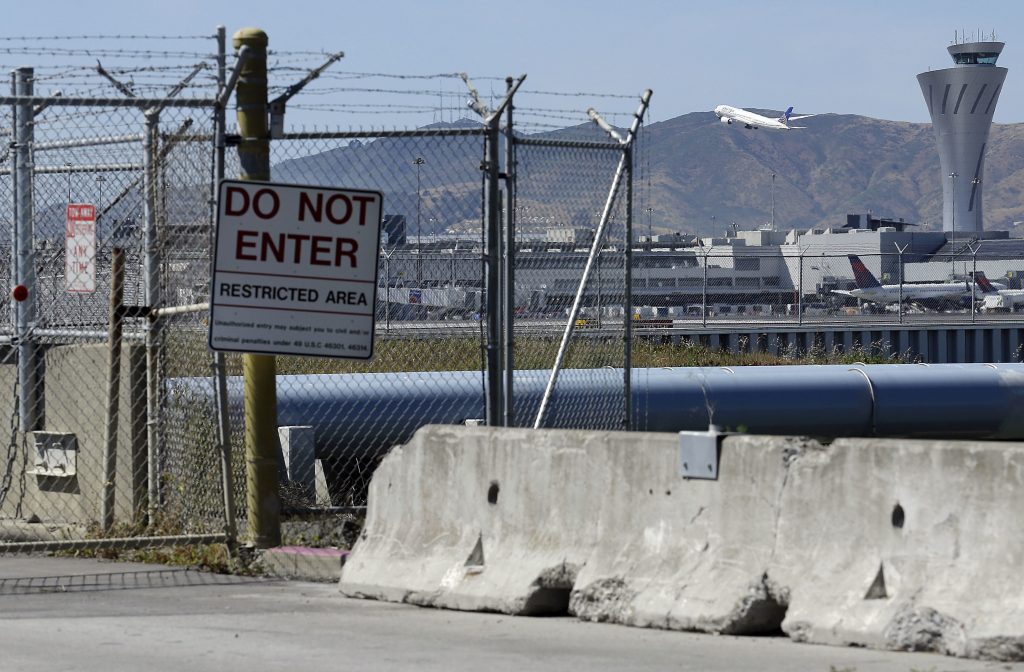 Under pressure to prevent people from sneaking onto runways and planes at major U.S. airports, authorities are cracking down — not on the intruders who slip through perimeter gates or jump over fences, but on the release of information about the breaches.

A year after an Associated Press investigation first revealed persistent problems with airports’ outer defenses, breaches remain as frequent as ever — occurring about once every 10 days — despite some investments to fortify the nation’s airfields. As Americans focus on the wait in ever-longer security screening lines inside terminals, new documents show dozens more incidents happening outside perimeters than airports have disclosed.

At the same time, leaders at some airports and the U.S. Transportation Security Administration are saying some of the 345 incidents AP found shouldn’t count as security breaches, even when intruders got deep into secure areas.

Was it a perimeter security breach in March 2015 when a woman walked past a vehicle exit gate at San Francisco International Airport and onto the tarmac, where she tried to flag down a jet for a trip home to Guatemala? No it was not, said the airport and TSA officials, who also tried to suppress information about the case. Nor did they label it a breach when a man, following voices only he could hear, drove through a San Francisco security gate and asked a worker fueling a plane when the next flight was.

After discussing intrusions openly at first, officials at several airports and the TSA started withholding details, arguing the release could expose vulnerabilities. Following a two-year legal struggle with the TSA, AP has now used newly released information to create the most comprehensive public tally of breaches.

The count shows that an intruder broke through the security surrounding one of 31 major U.S. airports on average every 13 days from the beginning of 2004 through mid-February; since 2012, the average has been every 9.5 days. Many intruders scaled barbed wire-topped fences or walked past vehicle checkpoints. Others crashed cars into chain link and concrete barriers. AP’s tally is of breaches at airports that handle three-quarters of U.S. passengers; it’s an undercount, because several airports refused to provide complete information.

While several intruders had guns or knives, the TSA and airports have been more focused on stopping weapons that passengers or baggage handlers try to sneak onto planes.

“It doesn’t surprise me that people sometimes try to jump over fences to see what they can get away with,” TSA Administrator Peter Neffenger said in a brief interview. It’s impossible for airports and local law enforcement to keep everyone out, he said, so “the question is: What’s your ability to detect it and … what might you do to mitigate that happening in the future?”

The AP began its investigation in 2014 after a 15-year-old climbed a fence at Mineta San Jose International Airport and scrambled into a jet’s wheel well. No one knew it happened until he emerged after the plane landed in Hawaii.

Last spring, AP reported there had been at least 268 breaches from the start of 2004 through early 2015 at San Jose and the nation’s 30 busiest passenger airports. This update identified 77 more breaches through mid-February, including 41 incidents that airports told TSA about, but not AP.

Airport officials stress that the miles of fences, gates and guardhouses protecting their properties are secure and say many intruders who get through are quickly caught. They point out that no case involved a known terrorist plot.

Perimeters are not “a gaping vulnerability,” said Christopher Bidwell, vice president of security at the advocacy group Airports Council International-North America. And the problem is not even as bad as airport and TSA records suggest, he said, because some intruders were detected immediately.

“Their ability to do anything nefarious isn’t really there,” Bidwell said. “It’s being neutralized because they are actively being surveilled.”

After eluding security and reaching parked planes at New York City’s John F. Kennedy International Airport, one intruder warned an airport worker in December that he “better not say” anything. Authorities never found the man, though they did arrest three others at different times in 2015, including one man who managed to drive his vehicle in with a convoy entering the airfield during a visit by Pope Francis.

The four intrusions were the most at JFK in any year.

Aviation security consultant Jeff Price said the TSA and airports have not done enough to address gaps in perimeter security.

“The straight-up honest answer as to why it’s not being vigorously addressed? Nothing bad’s happened. Yet,” Price said.

Through mid-February, the large airports with the most known incidents were in San Francisco (41), Las Vegas (30), Philadelphia (30) and Los Angeles (26). New York’s JFK ranked 10th, with 12 breaches.

Police reports suggest many of the trespassers were disoriented, intoxicated or delusional. Some came on skateboards and bikes, while others commandeered vehicles on the tarmac. One man got into a helicopter cockpit and was preparing to take off.

Some were caught immediately, others not for hours. Five intruders brought knives and one a loaded gun.

In one incident, Philadelphia airport officials said last year that an intoxicated woman waited for someone to drive out of a gate in April 2012, then walked through. This year, new records described a far more dangerous situation: The woman had just stabbed the driver of a tractor-trailer hauling $1 million of Jack Daniels whiskey in an attempt to steal it. When an airport police officer confronted her, she grabbed his gun and pointed it at his head before he wrestled it out of her hands and arrested her.

One month earlier, also in Philadelphia, a man rammed his SUV through a gate and sped down a runway at about 100 mph as a plane carrying 43 people was about to land.

AP won an appeal to learn about airport breaches in Philadelphia through the Pennsylvania Office of Open Records, but the city appealed that decision in state court before settling the case and providing details about incidents from 2004 through early 2015. This year, the airport first refused when AP sought an update, then would provide only the total number of breaches in 2015 and early 2016, with no other details.

Not everyone has withheld information. Airports including Miami, Las Vegas, San Jose and Portland, Oregon, have been relatively transparent, sending details of breaches and even in some cases surveillance videos.

Instead of prioritizing perimeter security, airports have focused on other vulnerabilities, partly due to scrutiny from Congress.

TSA workers are under pressure to do better after they failed to catch government investigators sneaking fake explosives and prohibited weapons through scanners. Another concern is the “insider threat,” prompted by arrests of workers in several airports whom authorities say used their security clearances to traffic guns or contraband.

Airport officials would not discuss how much they are spending on fortifying perimeters, but some airports that added security in the past year saw fewer intruders.

After Las Vegas finished putting razor wire atop its 15 miles of fencing not far from the Strip in early 2015, breaches dropped from eight in 2014 to one in 2015 and one so far this year. Officials in Miami and Phoenix said they increased patrols along each of their 13 miles of fence. Breaches in Miami fell from four to three between 2014 and 2015, though in Phoenix they rose from two to three.

Since AP published its initial findings, a half-dozen airports and the TSA have started to withhold all video surveillance footage and other details they previously released — and deny that some incidents were “security breaches” at all.

TSA did not respond to detailed questions about its changing standards. In a statement, spokesman Richard Ades wrote, “The serious nature of the current daily threat to global aviation, by an enemy that is determined to attack us, demands that we be judicious in releasing information.”

Incidents the TSA did not classify as breaches include a man jumping a Ft. Lauderdale, Florida, airport fence, and climbing onto a jet and a man caught running near planes in Atlanta after hopping a security gate.

Last year, San Francisco had the most perimeter security incidents that TSA insisted were not breaches — including the woman on the tarmac and the man who drove through a gate.

San Francisco airport officials said they felt unfairly singled out as the airport with the most breaches. Spokesman Doug Yakel said he suspected other airports were not as forthcoming, making his look worse than it should.

This time, San Francisco asked TSA whether five 2015 incidents were security breaches and the agency excluded them all. AP uncovered details of three, all of which qualified as breaches under the tally’s methodology.

AP considered an incident a perimeter security breach if someone reached a secure area by going over or under a fence, slipping through a gate, crashing a car into a fence or gate, cutting or passing items through a fence, or using fraudulent security credentials. Three dozen incidents that airports or the TSA provided did not meet the criteria, so were not included.

Since last spring, the San Francisco airport has increased patrols, added lighting and closed-circuit cameras, and fortified two checkpoints with electric gates that slide open and closed, Yakel noted. Before, the gates had just an arm, which intruders simply walked past.