The States Where It Pays to Buy a New Electric Car 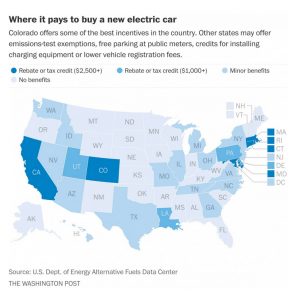 What’s the best place in the country to buy a new electric car?

That honor arguably goes to Colorado, whose legislature just passed a bill that, starting in 2017, will effectively give consumers a $5,000 discount at the dealership. Throw in an existing nationwide federal subsidy for futuristic, low-carbon vehicles powered by electricity, and Colorado residents could rack up as much as $12,500 in potential tax credits.

As the demand rises for high-tech electric vehicles (EVs) that can travel hundreds of miles on a single charge, we thought it’d be worth looking at which state governments offer the best incentives for folks who are looking to make the jump. Electric cars have a number of advantages over conventional gasoline-powered vehicles, such as a lack of emissions and vastly superior torque. They have some disadvantages, too, but a number of states believe the technology is important enough to dangle money in front of drivers for considering them.

It’s unlikely you’ll be able to game the system by visiting a particular state just to buy an electric car; many states make it a condition of eligibility that the vehicle be titled and registered there, and the income-tax credits are state-based anyway, so you’d have to be a regular taxpayer in, say, Colorado to take the Colorado discount. Even rebate programs such as California’s require you to be an in-state resident to benefit.

We’ll break things down in more detail below.

Colorado takes the cake with its huge tax credit, but some states offer similar incentives. Maryland, Louisiana and Utah all provide tax credits that max out at varying amounts — not nearly as much as what Colorado offers, but the maximums average out to around $2,000.

Still other states offer rebates for buying an electric car. Chief among these is Connecticut, which entices all EV drivers with as much as a $3,000 rebate. California will give middle-class households up to $2,500 for buying a new, plug-in EV, and that cap actually rises to $4,000 if your annual income falls below a certain threshold. (California provides much steeper rebates for hydrogen-powered vehicles; low-income consumers who buy one of those may be eligible for a $6,500 break.)

Delaware, Massachusetts, Pennsylvania and Rhode Island all provide rebates with a smaller cap. In the case of the latter two, there are only a handful of subsidies left in the fund; if you live in Pennsylvania or Rhode Island and are considering buying an EV, you may want to act soon. Meanwhile, New York State is expected to introduce an EV rebate program of up to $2,000 per vehicle by April 2017. Tennessee used to have a rebate fund, but that money has all been given out. Illinois’s rebate program was suspended last summer.

Both for rebates and tax credits, the amount of money you get back is often dependent on the size of your car’s battery, but not always.

Instead of giving you hundreds or thousands of dollars for buying an electric car, some states offer what we’ve described as “minor benefits.” These include the right to use HOV lanes even if there’s only one passenger in the car, for instance, or the ability to park in front of parking meters without paying. EV buyers may also find that their state has waived emissions testing requirements, offers separate tax credits for installing an EV charger at home, or has cut the costs of registration and licensing.

Some private entities, such as electric companies, offer their own incentives. For example, you may be eligible for a discount on electricity rates if you plug your vehicle in at night. In other places, you could qualify for $50 or $100 off a home charging station. But these tend to be pretty rare, and are usually found in states that don’t offer any government incentives.

To see exactly what your state offers, the Department of Energy maintains a searchable, downloadable database of all the relevant policies: http://www.afdc.energy.gov/laws/search