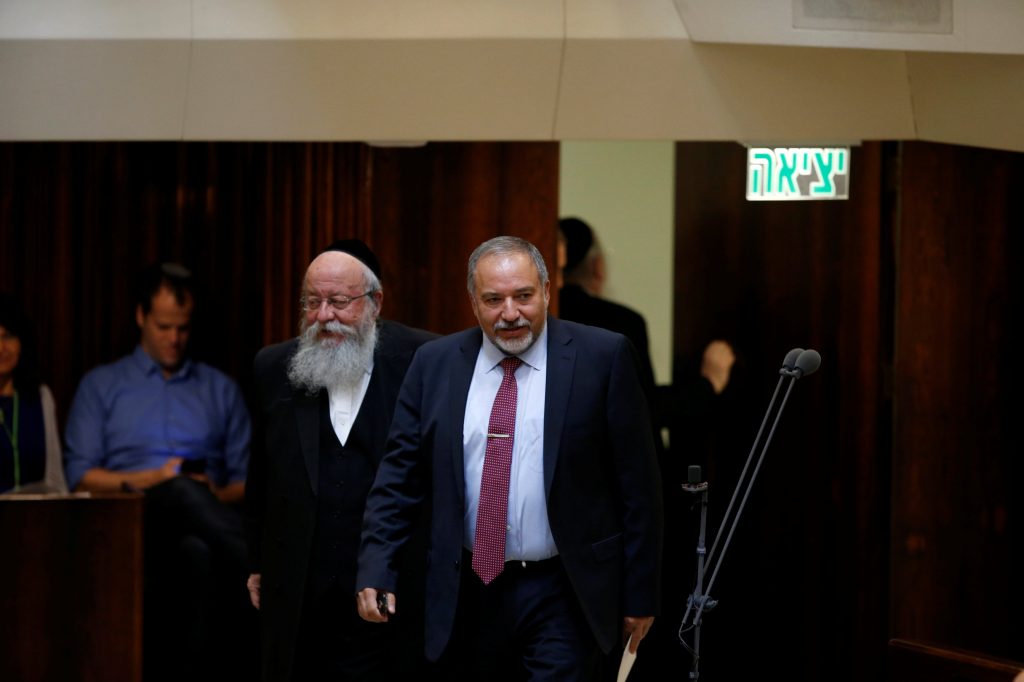 Negotiating teams for the government and Yisrael Beytenu were set to meet again Tuesday morning, after reporting that they had made progress in talks Monday night. The sticking point in the agreement to bring the party into the government and swear Avigdor Liberman in as Defense Minister – the issue of pensions for immigrants who have not worked in Israel enough years to qualify under current pension rules – is close to resolution, sources familiar with the talks told Israel Radio. A draft of the agreement is to be shown to Finance Minister Moshe Kachlon Tuesday, the sources said.

A “mini-crisis” cropped up during talks on the agreement Monday when Liberman said that the talks were to be suspended, because he felt Netanyahu could not deliver on his promise to increase pensions for immigrants. It appears now that Kachlon, who had opposed the move, has relented to some extent, while Liberman has lowered the amount of pension money he wants the government to provide.

Attempting to dispel rumors that the pensions he advocated were only for immigrants from Russia, Liberman stressed Monday that his reform applied to all immigrants, and that the Treasury and media were deliberately portraying his stance incorrectly. “This reform is necessary to correct the injustices in pension policy and to help those in need. Unfortunately most of these are from the former Soviet Union countries. I do not understand why it is being portrayed as an ethnic issue,” he said.

Meanwhile, Jewish Home leader Naftali Bennett said on Army Radio Tuesday that his party would not back down on a demand that the government appoint a special liaison to the IDF to review security issues on a weekly basis. “Members of the Security Cabinet do not get any special training, and they cannot go into the field each day to see what is going on,” he said. “They need a trusted authority who can provide them with accurate information on a regular basis.”

Had such a liaison been available before Operation Protective Edge in 2014, Bennett said, the government would have had vital information about Gaza terror tunnels before the war started. “Especially now that we have lost someone as professional as Moshe Yaalon, we need this liaison,” said Bennett, adding that he would instruct the Jewish Home minister not to approve the coalition expansion unless the issue was addressed.