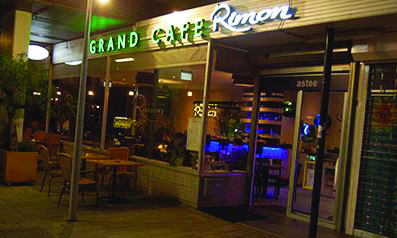 The Jewish community of Amsterdam was alarmed by a stabbing incident that injured a young woman in one of the city’s kosher restaurants. It is not clear whether the attack was motivated by anti-Semitism. Authorities say the assailant was a deranged individual. The victim was lightly wounded and is expected to make a full recovery.

“People here are suspicious about it; seems a bit strange for it to happen in the middle of the Jewish quarter, with a knife, as has been going on in Israel,” Rabbi Raphael Evers, a leader and spokesman for Holland’s Jewish community, told Hamodia. “It’s the first time anything like this happened here and some people are worried.”

The attacker, a Brazilian native, was sitting in the Grand Café Rimon, a dairy restaurant, Monday evening, when he reportedly went to Jumbo, a nearby grocery, and bought a knife. He quickly returned and stabbed Vicky Waremholt, a Jewish woman from Sweden, using the knife he had just purchased. Bystanders restrained the assailant until he was taken into custody by police. He apparently has a history of mental illness and did not make any explicitly anti-Semitic comments at the time of the attack.

Rabbi Evers said that Miss Waremholt was expected to be released from the hospital by Tuesday evening and that she had been spending time in the city prior to her planned marriage to a member of Amsterdam’s Jewish community.

The attack occurred in the Buitenveldert neighborhood, which is home to several thousand Jews and is the site of most of the city’s shuls, Jewish institutions and kosher establishments.

While very few incidents of anti-Semitic violence have occurred in Holland, with the increased threat against Jews in Europe, the community’s schools and shuls have been given heavy police protection in recent years.