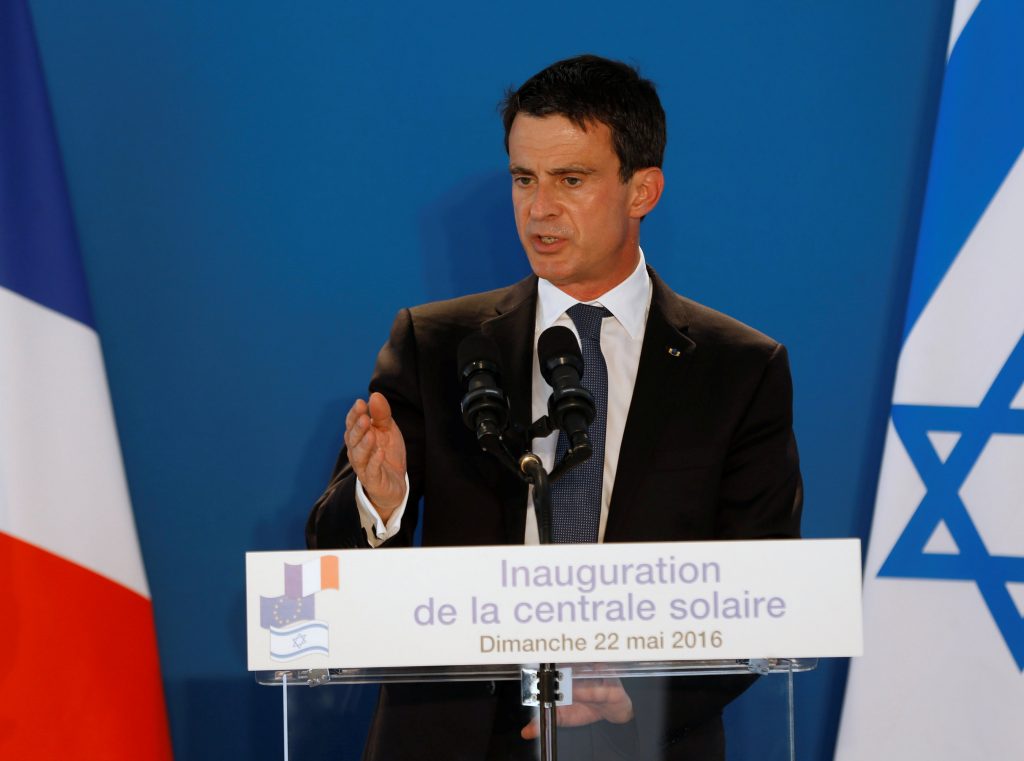 Prime Minister Binyamin Netanyahu is giving a French peace initiative a cool reception in a meeting with the visiting French prime minister.

Speaking alongside Prime Minister Manuel Valls, Netanyahu said direct talks “are the only way to proceed toward peace.”

Netanyahu said he would be willing to accept a French initiative that brought him and Palestinian leader Mahmoud Abbas together in a room alone to discuss the conflict’s most intractable issues. Valls said he would deliver the message to the French president. “We support anything that can contribute to peace and direct negotiations,” Valls said. Valls is visiting the region in a bid to rouse support for the initiative.

“I’m ready to clear my schedule and fly to Paris tomorrow,” said Netanyahu, then noted “well, I think tomorrow we’re expanding the government, but the day after tomorrow, Manuel. And it’s an open offer. I will clear my calendar, and I hope that this is taken up by you and by the Palestinians. Israelis and Palestinians have suffered too much. It’s time to sit down together and work out our differences so that peace may reign at long last.”

On June 3, Paris plans to host a ministerial meeting of 20 countries, including Egypt, Saudi Arabia and Jordan, as a first step to discuss the peace process. Israel and the Palestinians have not been invited.

The most recent peace negotiations, mediated by U.S. Secretary of State John Kerry, collapsed in April 2014, and the period since has been fraught with conflict, including a war in Gaza and an ongoing eight-month spell of unrest.

Netanyahu welcomed the French Prime Minister, recalling the terror attacks last year in Paris, notably in the Hyper Cacher supermarket, where four Jews were killed, Hy”d. “We spent some time in a synagogue in Paris after the awful attacks there,” said Netanyahu. “We felt a great solidarity, as well as of course the solidarity that you have felt from our people in the subsequent terror attacks in Paris.

“So in this spirit, I welcome you and I also want to express my appreciation for your statement saying that France’s UNESCO vote was a mistake, that France recognizes the Jewish people’s historic connection to the land of Israel.

“I have to be honest: I wrote a letter to Francois Hollande and expressed my shock that France had voted for a decision denying the Jewish people’s link to the Temple Mount, which spans thousands of years. And the reason that this vote was so troubling for us is that it implies that the Jewish people have no right to be here. And I think that remains the core of the conflict, the refusal to recognize the right of the Jewish people to have a nation-state in their ancestral homeland. I hope you encourage other nations that voted for this outrageous resolution to follow your lead and admit it was an error. And of course, the most important thing is that it doesn’t happen again.”