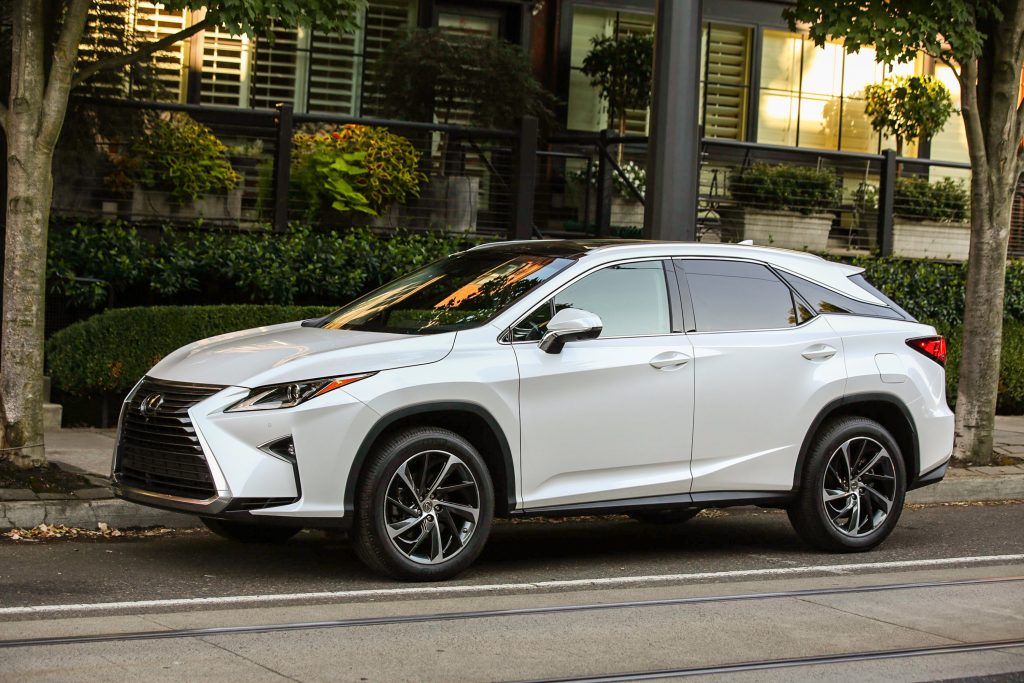 Interested in a new Lexus SUV? Don’t do what I did. Don’t drive the best one first.

Lexus has done exceedingly well with its utility vehicle line, a family of four models that includes the brand’s top-selling vehicle — the Lexus RX, which far outsells the most popular Lexus sedan.

The premium Toyota-owned car division sold more than 100,000 of the RX SUVs last year — twice as many as NXs sold, four times as many as GXs and many multiples more than the super-luxury LXs.

On the road, the RX feels plush and purpose-built, very good for getting around town but also extremely pleasant on the highway.

It’s powered by a 3.5-liter V6 engine that makes 295 horsepower and 267 pound feet of torque, which provide plenty of get-around grunt. Mated to an eight-speed automatic transmission, this engine felt effortless hopping up the hills where I live and merging into traffic on the way to and from work.

Even in standard modes, the handling was so light and limber that I often forgot I was driving a five-passenger SUV, with large headroom and legroom and plenty of storage space. It felt more like a midsize sedan. Scooting around town after hours was made easier by headlamps that swivel with the turn of the steering wheel, illuminating corners as they approach.

On the open road, the luxury crossover was even more impressive. Smooth and quiet, with minimal tire and wind noise and almost no engine noise, the RX was just the prescription for an extended road trip. Even above the speed limit, even on a rough patch of pavement, it was a gentle giant.

The interior space has a bright, airy feel. Lots of glass means lots of light and good visibility. The heated and ventilated leather front seats offered excellent comfort. After several hours behind the wheel I felt like I’d just been in the car briefly. The very good sound system required some navigation, and so did the navigation system. The RX has many, many buttons, and it took me half a day of driving before I mastered basic skills like changing the SiriusXM channel.

Lexus calls this “intuitive technology,” which I’ve come to understand means that it feels intuitive to the engineers, but might not to the user.

The 2016 RX is being advertised by Lexus as all-new. The exterior design includes a “larger, more aggressively sculpted body.” The overall length has grown by almost 5 inches and the wheelbase by 2 inches, and ground clearance has increased.

The RX is available for the first time with 20-inch wheels — 18-inch is standard — which heighten its muscularity. Also new this year are the paint colors Caviar, Autumn Shimmer and Nightfall Mica. I can’t imagine how those colors would actually look, but don’t they sound delicious?

Lexus also describes its new interior as “futuristic.” But some of the electronics are pretty futuristic too. The effective head-up display will show, depending on operator selection, speed, speed limit, tachometer, compass and other things.

And a Big Brotherly monitoring system is keeping an eye on the driver too. At one point on a longer drive, a message on the dashboard asked me, “Would you like to take a rest?” and an icon representing a steaming cup of coffee appeared. Was I getting drowsy? Had I nodded off? How did the car know that?

Lexus explains that this is a new feature called “sway warning.” The car is sophisticated enough to detect driving behavior that is deteriorating due to “drowsiness, inattention or distraction.” The system steps in and asks the driver whether it’s time for a little break.

In retrospect, I wish I’d driven the Lexus NX before the new RX. I would have been that much more impressed with the higher-grade SUV, and probably would have liked the lesser vehicle just fine.

By comparison, the NX feels underpowered and weak. Its 2.5-liter, four-cylinder engine puts out 100 less horsepower than the RX, on a vehicle that is only about 250 pounds lighter.

It wasn’t as quiet and didn’t feel as sturdy on the road. Although it’s 10 inches shorter in length and 3 inches lower in height, it felt more top heavy.

It was fitted with seats that, like those in the RX, were highly adjustable and very comfortable, and were heated and ventilated. They also slide back electronically when the car is turned off, to allow for easier exit, and then resume their proper positions when the car is started again.

On the other hand, the NX was outfitted with a small mouse pad, also in the center console, designed for easier operation of the entertainment and navigation systems. Even after several days in the car, I never got the feel for it, and found my eyes leaving the road often to try to follow the weirdly fluid cursor as it danced around trying to find what I was looking for.

The version I drove was a hybrid, which had pluses and minuses. Around town, being driven fairly aggressively, the NX easily averaged 30 miles per gallon. On the other hand, it switched from electric to gas drivetrains like someone waking up grumpy from a nap. (The RX can also be had in a hybrid drivetrain version.)

I probably would have liked the NX just fine, on its own merits, had I driven it first — or driven it several months after its more luxurious sibling.

But I had been spoiled by the RX, and the NX suffered unfairly for that.