Israel ANALYSIS: Yaalon Resigns, But Promises: I’ll Be Back and Contend for Leadership of Country
Israel 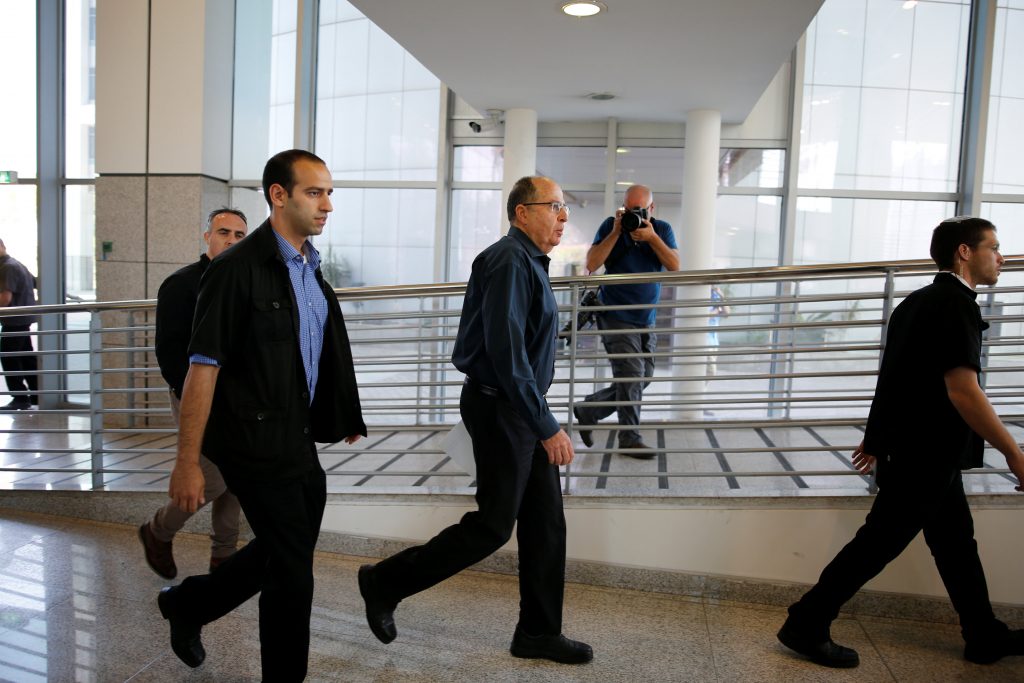 Defense Minister Moshe Yaalon, or now former defense minister, spoke to the press at the Kiryah army base in Tel Aviv Friday at midday, after he announced earlier in the day that he resigned from his position.

In his speech, Yaalon noted that he entered the political sphere as an emissary in order to work toward the betterment of Israel and in particular towards its improved security.

“In each and every one of my actions and decisions, I weighed the safety of Israel and the Israeli people as well as the well-being of the nation above all else,” Yaalon said.

Despite his recent criticism of the Israeli political scene, Yaalon said that while he is stepping away from politics in the near future, he has no intention to step away from political life permanently, and he will contend for the leadership of Israel in the future.

What brought Yaalon to make this dramatic step at this stage?

In recent months, Yaalon has felt that something has changed between him and Netanyahu, both personally with Netanyahu and with the way of the Likud. This week, when the coalition talks between Netanyahu and Yitzchak Herzog of the Zionist Camp picked up speed and seemed nearly ready to be closed, Yaalon realized that he is the one who will need to pay the price. Herzog wanted both the Foreign Ministry and the Defense Ministry. Under the talks, Hezog was to receive the Foreign Ministry (which is manned now by Netanyahu) as well as the Defense Ministry. Although Netanyahu said it would only be given to Hezog after a year, with Herzog wanting it immediately, they would have come to some middle ground.

(As an aside, MK Amos Yadlin was the choice of Herzog for Defense Minister, a much more impressive candidate, for the world at least. He has a very impressive military and diplomatic résumé: he served as Israeli Air Force general, IDF military attaché to Washington and head of the IDF Military Intelligence Directorate.)

Ultimately Yaalon read the political map – correctly it seems – and saw he would need to leave his post, sooner or later.

Another thing that may have helped Yaalon reach this conclusion is the report on Operation Protective Edge in 2014, that is due to be released in coming weeks. This report would cast him in a very negative light and he would seemingly need to quit in a very bad way, and instead of it hitting him in the capacity of Defense Minister, he decided to preempt this and step down now.

The saga of and disagreements between Yaalon and Netanyahu need no elaboration, and it was sure that an explosion between the two would come.

Yaalon — by his rush to judgment on the soldier who shot the terrorist in Chevron, his defense of Deputy IDF chief Yair Golan who compared Israel today to Germany on the eve of the Holocaust, and the right of officers to speak out even against the policies of their superiors — lost Netanyahu’s confidence.

After that, Netanyahu no longer felt constrained about replacing him with a candidate of the Zionist Camp, or now, with Liberman.

Prior to Yaalon’s announcement, it had been believed that Netanyahu would offer him the job of foreign minster as compensation. Netanyahu offered him this officially late Thursday, but at that stage it was too late.

Yaalon, in his remarks, also spoke of the change in the Likud Party line. “Much to my dismay, I have recently found myself in conflicts of professional and ethical natures with the prime minister as well as with a number of MKs.”

“Israel, as well as the Likud party, has been taken over by dangerous and extreme elements,” Yaalon said. In his thoughts, the Likud of today “is not the Likud that I joined, of Jabotinsky and Begin. … Unfortunately senior politicians have chosen incitement as means to hold on to power, rather than uniting the society,” Yaalon stated.

Thus, in the current Likud, under Netanyahu, he couldn’t remain.

Now, on the outside of the Likud, Knesset, Cabinet and the political sphere, he is free to say whatever he feels like saying about whomever he chooses.

On the other hand, during his speech he didn’t slam Netanyahu openly, as he doesn’t want to appear bad in the public’s eye. It was, overall, a good speech, very diplomatic. But bottom line, obviously, he is taking a shot at the leadership of the country, head to head with Netanyahu. He will now work out with which party, which names, he will run; anything but Likud, anyone but Netanyahu.

Will this current new government with Liberman last long?

Seemingly, it may work initially, but it presumably may not last too long. It’s not the numbers – as the 61 MKs coalition lasted well over the last year or so, but it’s the mechutanim involved – Liberman and Netanyahu do not see eye to eye on every issue, and it won’t be quiet…

What actually might help stabilize the coalition is the Sunni initiative. Senior sources in the government revealed Thursday that the talks with Herzog about joining the government were accelerated by the emergence of a secret plan for recognition of Israel presented by six moderate Arab states. According to the sources, the representatives of those Sunni states persuaded Herzog of the seriousness of their intentions, and this was the main reason he changed course and decided to seek a unity government, on condition that he would be responsible for moving the plan forward.

The addition of Liberman to the government as defense minister should pose no impediment, and he has already been briefed on the matter.

This may save the government, and put Liberman in a positive light across the Western world.

And a final word about Liberman.

He may sound tough and talk tough, but once he joins the government and hears what the senior IDF staff have to say, hears the reports of the Mossad, his direction may change. “What one sees from here, one doesn’t see from there” is a very true statement.

And for our community, who were concerned with the inclusion of Liberman as defense minister, as he was very outspoken over the draft of yeshivah students, it was made clear to him from the outset of the coalition talks, that this law cannot be touched or changed. As Netanyahu told him, your party is six MKs (down to five now) and UTJ and Shas – who will bolt the coalition – are 13 MKs, leaving him with no coalition.