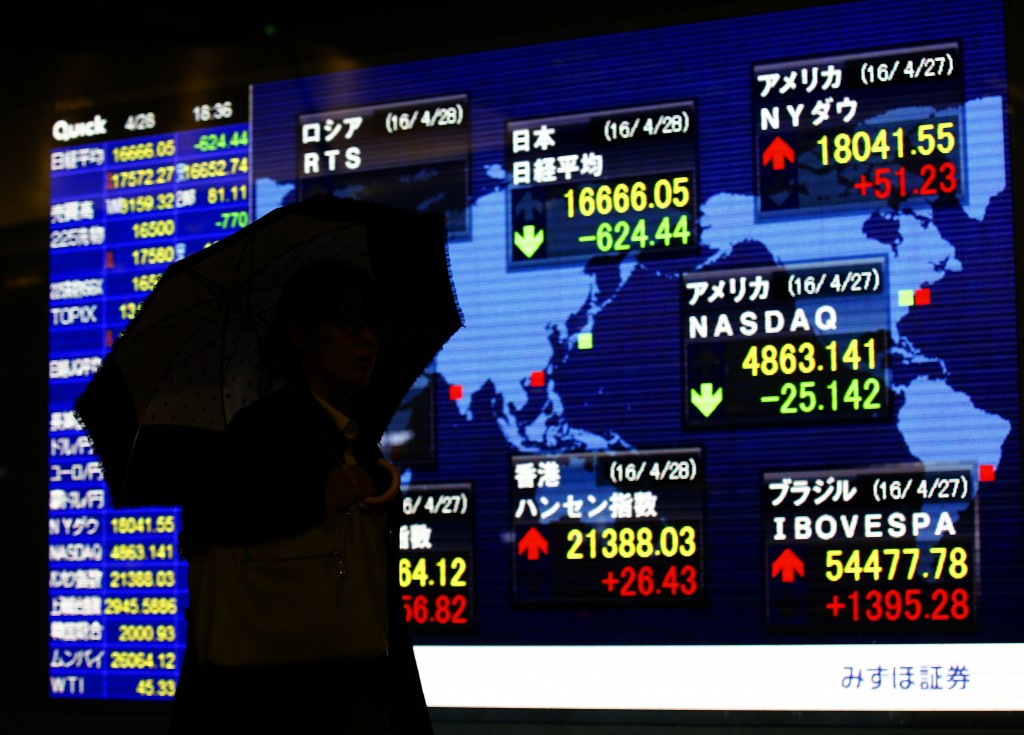 Asian stocks weakened on Wednesday in the wake of accelerating U.S. inflation and comments from Federal Reserve officials that rekindled prospects of an interest rate rise as early as June.

Japan’s Nikkei climbed 0.6 percent as the yen gave up gains seen immediately following the GDP data to fall 0.2 percent to 109.33 per dollar.

“The yen strengthened a bit because growth was stronger than many had expected,” said Ayako Sera, market strategist at Sumitomo Trust and Banking. “But looking at the details, there were still some concerning areas, including capital spending.”

Markets are now looking to Prime Minister Shinzo Abe’s meeting with his coalition party leader, where he could discuss postponing a planned sales tax hike to support the flagging economy.

Wall Street sold off on Tuesday, with the S&P 500 losing 0.94 percent, after U.S. consumer prices recorded their biggest increase in more than three years in April as gasoline and rents rose.

Other data on Tuesday showed housing starts and industrial production rebounded strongly last month, adding to the case for an early rate hike.

The rate-sensitive two-year U.S. Treasury notes yield, which touched a three-week high of 0.847 percent earlier on Wednesday, was last trading at 0.843 percent.

A few Federal Reserve policymakers repeated their mantra that there could be two rate increases or more.

Atlanta Fed President Dennis Lockhart, seen as a policy centrist on the board, said on Tuesday that he still assumes there will be two to three rate hikes, a view echoed by San Francisco Fed President John Williams.

Dallas Fed President Robert Kaplan, seen as a hawk, said he will push for an interest rate hike in June or July.

“Since the strong retail sales data last Friday, the Fed has clearly started a communication campaign to urge markets to price in a hike in June, even though markets have not gone there yet,” said Tomoaki Shishido, fixed-income analyst at Nomura Securities.

“They set (Fed Chair Janet) Yellen’s speech on June 6, just after the next payroll data and just before the blackout period will start before the next policy meeting. They wouldn’t have to do this if they have no plan to raise rates in June,” he added.

Expectations of further inflation are stoked by a recent recovery in oil prices, which hit seven-month highs on Tuesday, on expectations of a drawdown in U.S. crude stockpiles and a new wildfire threat on Canadian oil supplies.

The U.S. dollar rose on the rising expectations of a Fed rate hike, but gains were capped as many market players looked to the Group of Seven finance chiefs meeting later this week.

The dollar index, which tracks the currency against a basket of six major peers rose 0.2 percent to 94.758.