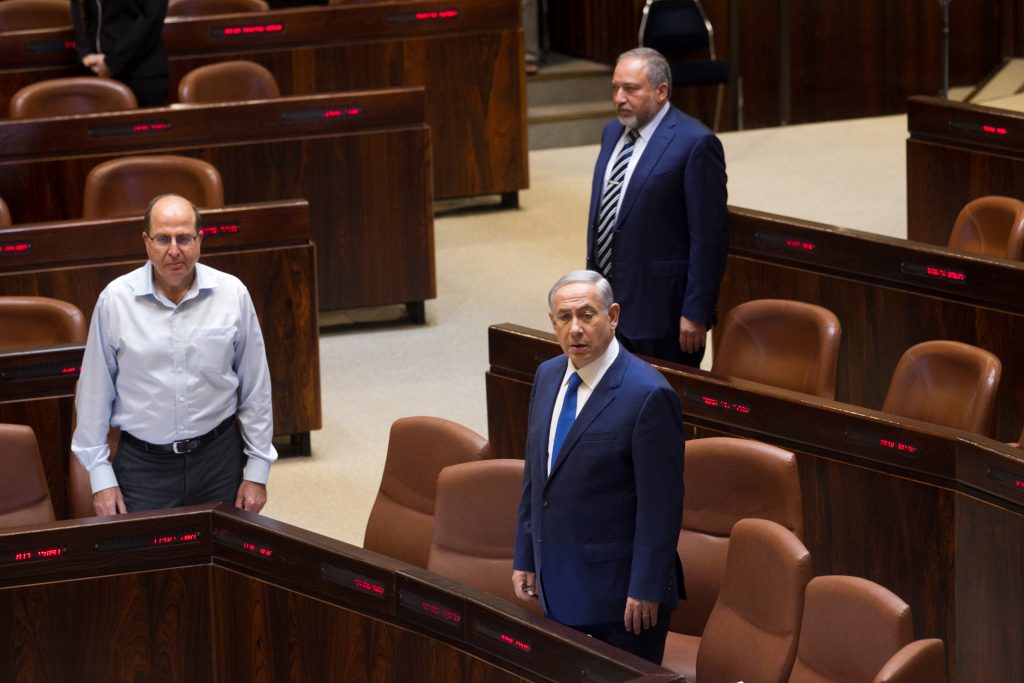 At the conclusion of a meeting between Prime Minister Binyamin Netanyahu and Yisrael Beytenu head Avigdor Liberman, the two announced that they would have their staffs set up a further meeting to discuss the inclusion of Liberman’s party in the coalition.

Sources in both parties said that the meeting was “positive and issue oriented.” The sources said that Netanyahu and Liberman were set to meet again Wednesday night. The Likud announced that MK Yariv Levin would head the Likud’s negotiation team.

The announcement comes after a dramatic day that started with what seemed to be a fait accompli of Zionist Camp head Yitzchak Herzog joining the coalition. Over the past week, rumors have been flying about Netanyahu’s courting of Herzog, to the extent that the Prime Minister was prepared to drop key legislation backed by the coalition to attract Herzog.

But Herzog himself deflated that balloon Wednesday afternoon, when he said that Netanyahu was apparently trying to play him off against Liberman – and he wasn’t interested in the political games he accused the Prime Minister of playing. “Either he can go to war with the resultant funerals, in a campaign headed by Liberman and Naftali Bennett, or he can join our journey of hope for all Israelis,” said Herzog. “It’s up to Netanyahu to decide, and until he does, we will not negotiate with him. I am not influenced by the sentiments of Liberman or others – I follow my own truth.”

Among the jobs being offered to Liberman is said to be that of Defense Minister. Reports in the Israeli media Wednesday said that Netanyahu had informed Moshe Yaalon that he would be moved from Defense to the Foreign Ministry, but Israel Radio later reported that Yaalon’s office had denied having that discussion with Netanyahu. Nevertheless, Channel Two reported that Netanyahu had officially offered Yisrael Beytenu the Defense and Absorption Portfolios. Current Absorption Minister Ze’ev Elkin said that he would be very happy to have the party in Netanyahu’s coalition.

A senior source in Jewish Home also expressed support for the deal – because it would remove Yaalon as Defense Minister, in which capacity he is essentially overall military governor of Judea and Samaria. “Yaalon needs to go home, and he is on the way out,” the source said, because of the damage he had done to the settlement enterprise. In a statement, Jewish Home MK Moti Yogev made clear that he was not the source, and that while he welcomed the prospect of Yisrael Beytenu joining the coalition, he thought Yaalon was doing a fine job as Defense Minister.