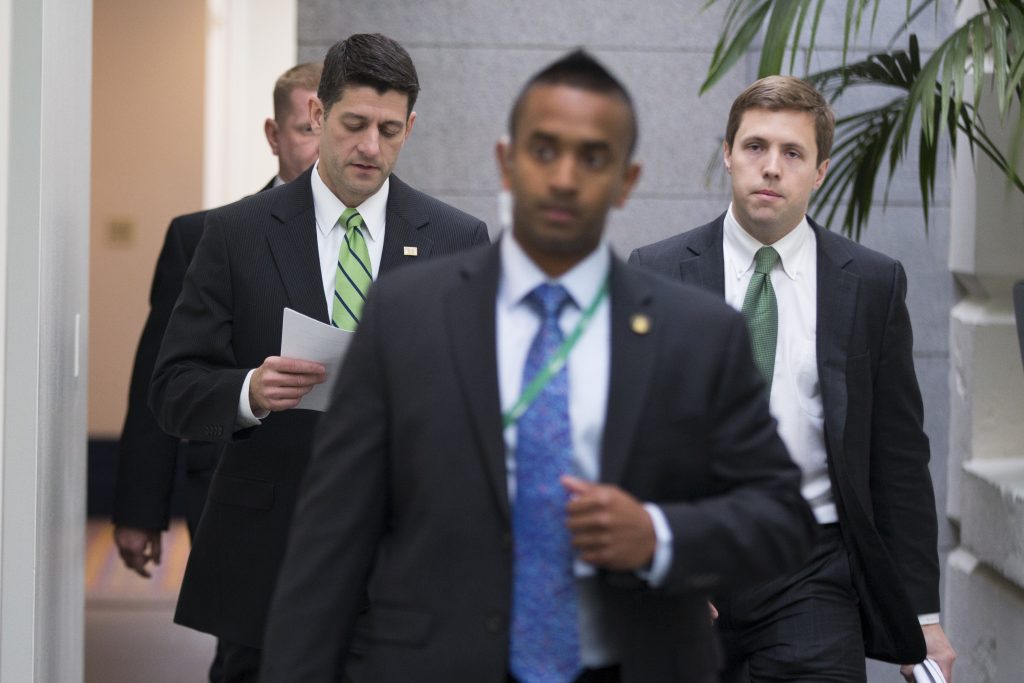 Defying a veto threat, the GOP-led House is pressing ahead with debate on a $602 billion defense policy bill that seeks to halt an erosion of the U.S. military’s combat readiness by purchasing more weapons and forbidding further cuts in troop levels.

The legislation also proposes greater oversight of the White House’s National Security Council, prohibits prisoners held at the Guantanamo Bay, Cuba, detention facility from being moved to the U.S., and gives U.S. service members a higher pay raise than the Pentagon recommended.

In a 17-page statement on the policy bill, the White House detailed its objections to numerous provisions and said President Barack Obama would reject the legislation if it reached his desk.

Among the measures the Obama administration opposes is a Republican plan to shift $18 billion in wartime spending to pay for additional ships, jet fighters, helicopters and more that the Pentagon didn’t request.

To make up for the shortfall in the wartime account, Obama’s successor would submit a supplemental budget to Congress in early 2017, according to Rep. Mac Thornberry, R-Texas, the plan’s architect and the chairman of the House Armed Services Committee. He and other proponents of the spending increase say it is essential to halt a decline in the military’s ability to respond to global threats that has worsened on Obama’s watch.

But Defense Secretary Ash Carter has called the plan a “road to nowhere” that actually degrades combat readiness by retaining troops and buying equipment that can’t be sustained, effectively creating a hollowed out force. In a speech Tuesday, Carter said that the proposal “risks stability and gambles with war funding, jeopardizes readiness, and rejects key judgments of the [Defense] Department.”

The House bill would block reductions in the number of active-duty troops by prohibiting the Army from falling below 480,000 active-duty soldiers and adding 7,000 service members to the Air Force and Marine Corps. The legislation also approves a 2.1-percent pay raise for the troops — a half-percentage point higher than the Pentagon asked for in its budget submission.

Lawmakers sidestepped a thorny debate over whether women should be required to sign up for a potential draft after Republicans stripped from the bill a provision to erase Selective Service gender restrictions. They replaced it with a measure to study whether the Selective Service is even needed at a time when the armed forces get plenty of qualified volunteers, making the possibility of a draft remote.

Republicans approved an amendment authored by Thornberry to curb what they say is micromanagement of military operations by National Security Council staff. Thornberry said he has personally heard from troops in combat who have received intimidating calls from junior White House staffers even though their role is to coordinate policy and advise the president.

To increase oversight and accountability, Senate confirmation of the president’s national security adviser would be required if the size of the National Security Council staff exceeds 100 employees, according to the amendment.

Republicans have inserted into the bill a longstanding ban on moving prisoners held at Guantanamo Bay to the United States. The embargo has kept Obama from fulfilling a campaign pledge to shutter the facility. The White House said the restrictions interfere with the executive branch’s authority to decide when and where to prosecute prisoners.

The legislation also rejects the Pentagon’s request for another base closure round and adds money to restore and modernize military facilities. The Defense Department wants to shutter excess bases and installations and use the savings to strengthen the armed forces.