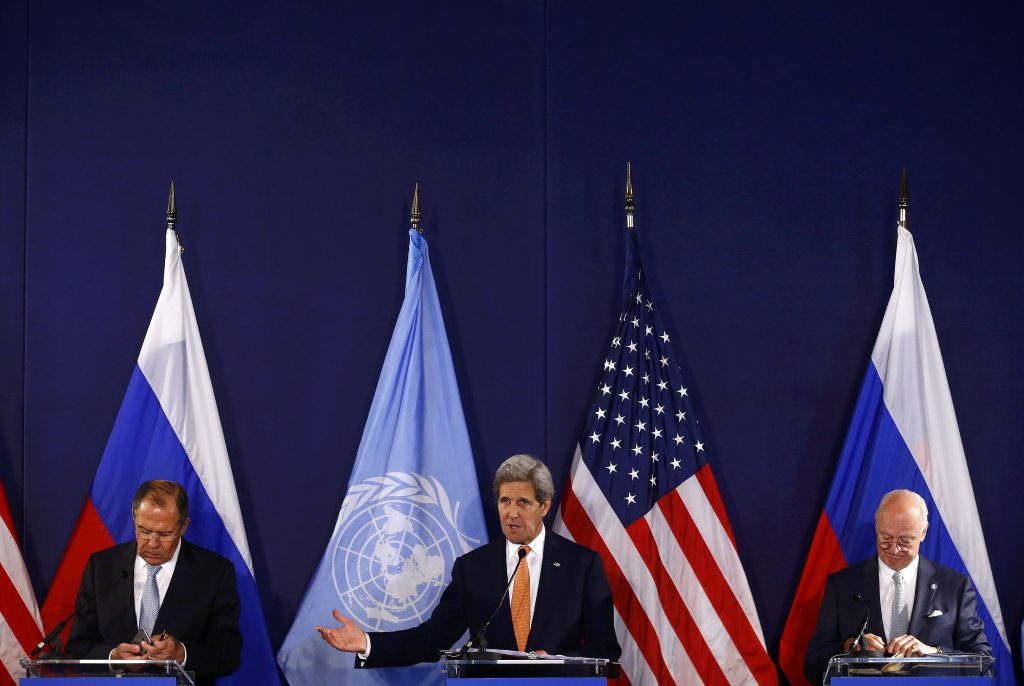 Major powers sought at talks on Tuesday to re-impose a ceasefire across Syria and ensure aid reaches besieged areas, with Moscow and Washington deeply divided over the fate of President Bashar al-Assad and violence rumbling around the country.

The United States and Russia will help explore who is responsible for ceasefire violations, German Foreign Minister Frank-Walter Steinmeier said after the talks in Vienna aiming to revive the February “cessation of hostilities.”

“The United States and Russia said they are ready to make progress on the technical level to be able to check who is (responsible) for breaking the ceasefire,” the minister told reporters. The talks also authorized air drops to improve the humanitarian situation, he added.

Officials and diplomats had said the talks, including the United States, Russia, Iran, European and Middle East powers, were unlikely to lead to decisions that could change the course of the five-year war that has killed more than 250,000 people.

A surge in bloodshed in Aleppo, Syria’s largest city before the war, wrecked the partial “cessation of hostilities” sponsored by Washington and Moscow, which had allowed U.N.-brokered indirect talks that included the warring sides to take place in Geneva.

Those talks collapsed last month after the opposition walked out due to a surge in bloodshed. U.N. special envoy for Syria Staffan de Mistura had hoped to launch a new round of peace talks between the two sides by the end of May.

After Tuesday’s meetings, de Mistura said no decision had been taken yet on the next round, but “we cannot wait too long.”

The Geneva talks aim to end a war that has created the world’s worst refugee crisis, allowed for the rise of the Islamic State group and drawn in regional and global powers.

Washington insists Assad must go but the president, backed by Moscow and Tehran, is fighting for territory and refuses to step down.

The United Nations said this month that Syria’s government, which has been on the front foot in the war since its ally Russia intervened last year, was refusing U.N. demands to deliver aid to hundreds of thousands of people.

Describing the talks as serious and engaged, another Western diplomat said one of the key issues was stopping the violence in a way which successfully separated al-Nusra Front, al-Qaida’s wing in Syria, from other opposition fighters.

Nusra, along with Islamic State, is not party to the ceasefire. Western and Arab states accuse the Syrian government and Russia of using links between rebels and Nusra as a pretext to launch major offensives against other opponents of Assad.

The main Syrian opposition’s High Negotiations Committee, which walked out of the Geneva talks last month, has said it would not resume talks until there was an improvement in the humanitarian situation on the ground.

HNC chief negotiator Asaad al-Zoubi was doubtful about how much the Vienna talks could achieve: “I don’t think there will be results, and if there are any results they will not be sufficient for the Syrian people,” he told Reuters.

“We are used to the fact that Russian and U.S. foreign ministers are taking the world into an unknown direction,” saying they are working against the people not for them.

Asked if the HNC would return to another round of talks, al-Zoubi said: “The HNC has said that if aid does not reach everybody, if the sieges aren’t lifted and if a full truce does not happen, there will be no negotiations.”

De Mistura is trying to meet an Aug. 1 deadline to establish a transitional authority for the country that would lead to elections in 18 months, as agreed in a December United Nations Security Council resolution. Kerry said in Vienna that if progress in talks was made the time-frame would be respected.

However, the U.S. administration’s failure to convince Moscow that Assad must go is fueling European and Arab frustration at being sidelined in efforts to end the country’s five-year civil war, diplomats say.

Some diplomats and former officials have questioned whether the United States has underestimated Russia’s determination to keep Assad in power.

In the past weeks, several hundred civilians have been killed in air strikes and rebel bombardments in Aleppo province alone, while fighting has taken place in other parts of Syria, including Idlib, Deir al-Zor and around Damascus.

As the talks took place, rebel fighters and officials in the besieged town of Daraya on the outskirts of Damascus said they believed government forces were preparing an assault.

Last week government forces refused entry to what would have been the first aid convoy to reach the town. Troops began shelling the town on Thursday, ending a lull that had prevailed since the ceasefire took effect. Residents say they are on the verge of starvation.

The town, situated close to a large air base and just a few miles from Assad’s palace, was known for its peaceful protests in the early days of the uprising against Assad, and has been besieged and regularly bombed since 2012.

“Large convoys of (government) troops are moving from the airport and from Ashrafiyat Sahnaya (the next town south),” said Abu Samer, spokesman for the Liwa Shuhada al-Islam rebel group.

“We are prepared to repel their assault but our main fear is for the civilians besieged in the town who face severe shortages of food.”

A Syrian military source denied rebel accounts of troop deployments, saying nothing had changed in the area.

The blocked aid convoy was not allowed to contain food, only medical and other aid, and residents launched an online campaign ahead of the expected delivery with the slogan: “We cannot eat medicine.”