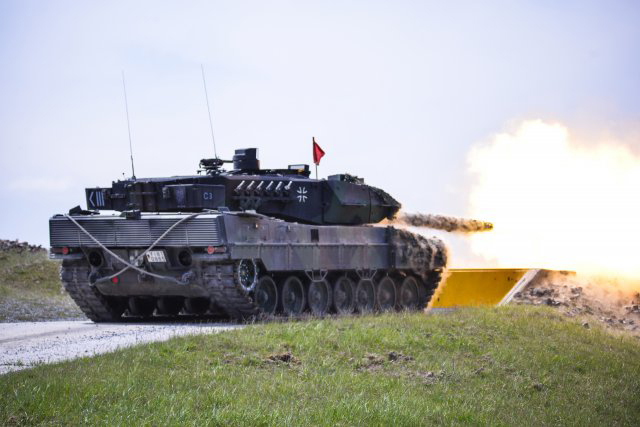 Six NATO countries squared off last week in the Strong Europe Tank Challenge, a two-day competition that pitted some of the alliance’s best tank crews against each another in a series of events centered around armored warfare.

The challenge, which concluded Thursday and was held in Grafenwoehr, Germany, was the first of its kind there since 1991. The competition was designed to foster “military partnership” while showcasing the ability of NATO countries to work together, according a U.S. Army statement.

Germany took top honors in the competition, followed by Denmark and Poland in second and third place respectively.

The challenge, co-hosted by U.S. Army Europe and the German Bundeswehr, is a nod to the Cold War-era and a tacit acknowledgment that NATO will need well-trained conventional forces if it ever has to go to war with a newly-emboldened Russia.

“You’ve got to continue to train; you have to invest the time and resources in the training to have the best possible deterrent force,” Lt. Gen. Ben Hodges, commander of U.S. Army Europe, told Stars and Stripes.

Earlier this year, the Pentagon announced it was quadrupling the 2017 budget for its “European Reassurance Initiative” and has indicated that the United States will soon rotate additional troops into the region in an effort to deter any future Russian aggression.

“This international tank challenge is a part of a series of things that helps us improve our skill,” Hodges added.

The challenge featured seven tank platoons in total. Denmark, Germany, Italy, Slovenia and Poland all competed with one platoon, while the United States sent two. Each platoon was comprised of four tanks, manned by four men. Germany took the gold in their Leopard 2A5 tanks, while the U.S. Army in the M1A2 Abrams didn’t place.

Events in the competition included an obstacle course littered with 13 different challenges, a shooting competition, and tank-based navigation. The platoons were given points for each event in an effort to get the most out of 1,000.

While the challenge could mark the beginning of a new trend for the United States and its European allies, Russia has long held, what it calls, tank biathlons. The Russian competitions feature a ballet-like spectacle of armored vehicles and are well attended by civilians.

Last summer, Russia beat 16 other countries in their third annual international challenge of the sort, although no Western nations were present.