A large fire at a warehouse in Givat Shaul, near the entrance to Yerushalayim, consumed part of the Yerushalayim Forest and forced the closure of Road 1, the main entrance into the city. There were no injuries reported.

Traffic was being rerouted at the Anava Junction, where drivers on Road 1 headed to Yerushalayim could pick up Road 443 into the city. Drivers were also being directed to Road 9, near the Mevasseret Tziyon intersection. Needless to say, traffic into the city was almost at a standstill. 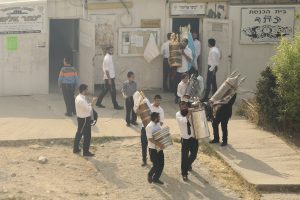 Men evacuating sifrei Torah and sefarim from a shul close to the fire in Givat Shaul, Monday afternoon. (Shlomi Cohen/Flash90)

Large fires also broke out in Be’er Sheva, Beit Shemesh and several other locations around the country.

Israel experienced a second day of 40-plus Centigrade (close to 100 degrees Fahrenheit) temperatures Monday, with the resultant record demand in electricity – and numerous brush fires that were either set deliberately or the result of negligence.