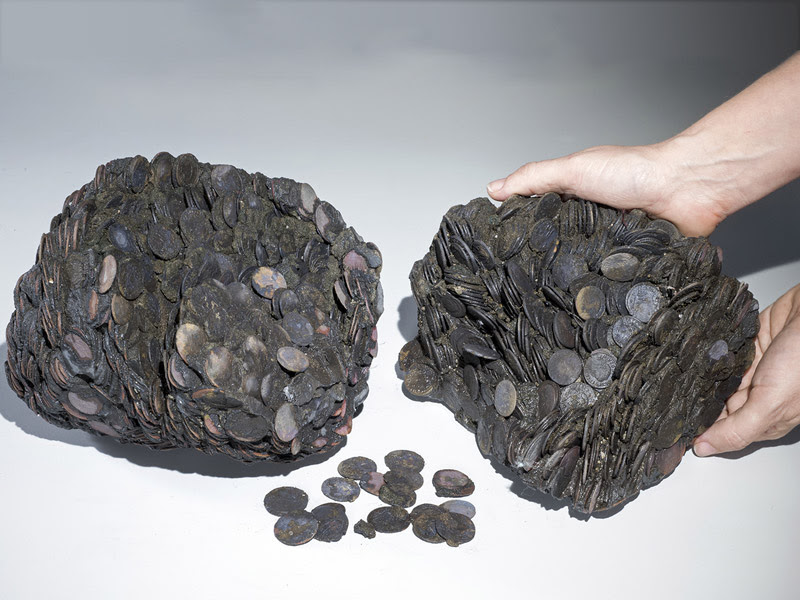 An exceptionally large, ancient marine cargo of a merchant ship that archaeologists believe sank during the Late Roman period 1,600 years ago was discovered by two divers in the ancient port of Caesarea just before Pesach.

As soon as they emerged from the water, divers Ran Feinstein and Ofer Ra’anan of Ra’anana contacted the Israel Antiquities Authority and reported the discovery and removal of several ancient items from the sea.

A joint dive at the site together with IAA archaeologists revealed that an extensive portion of the seabed had been cleared of sand and the remains of a ship were left uncovered on the sea bottom: iron anchors, remains of wooden anchors and items that were used in the construction and running of the sailing vessel.

Many of the artifacts are bronze and well-preserved: a lamp in the image of the head of an African slave, fragments of three life-size bronze-cast statues, objects fashioned in the shape of animals such as a whale, a bronze faucet in the form of a wild boar with a swan on its head, and more.

In addition, fragments of large jars were found that were used for carrying drinking water for the crew in the ship and for transportation at sea. One of the biggest surprises in particular was the discovery of two metallic lumps composed of thousands of coins weighing about 44 pounds which was in the form of the pottery vessel in which they were transported.

According to Jacob Sharvit, director of the Marine Archaeology Unit of the Israel Antiquities, “In recent years we have witnessed many discoveries in the harbor at Caesarea. These finds are the result of two major factors: a lack of sand on the seabed causing the exposure of ancient artifacts and an increase in the number of divers at the site.

“In this particular instance, the divers demonstrated good citizenship and are deserving of praise. They will be awarded a certificate of appreciation and invited to tour the storerooms of the National Treasures. By reporting the discovery of the marine assemblage to the Israel Antiquities Authority they have made it possible for all of us to enjoy these spectacular remains from antiquity.”