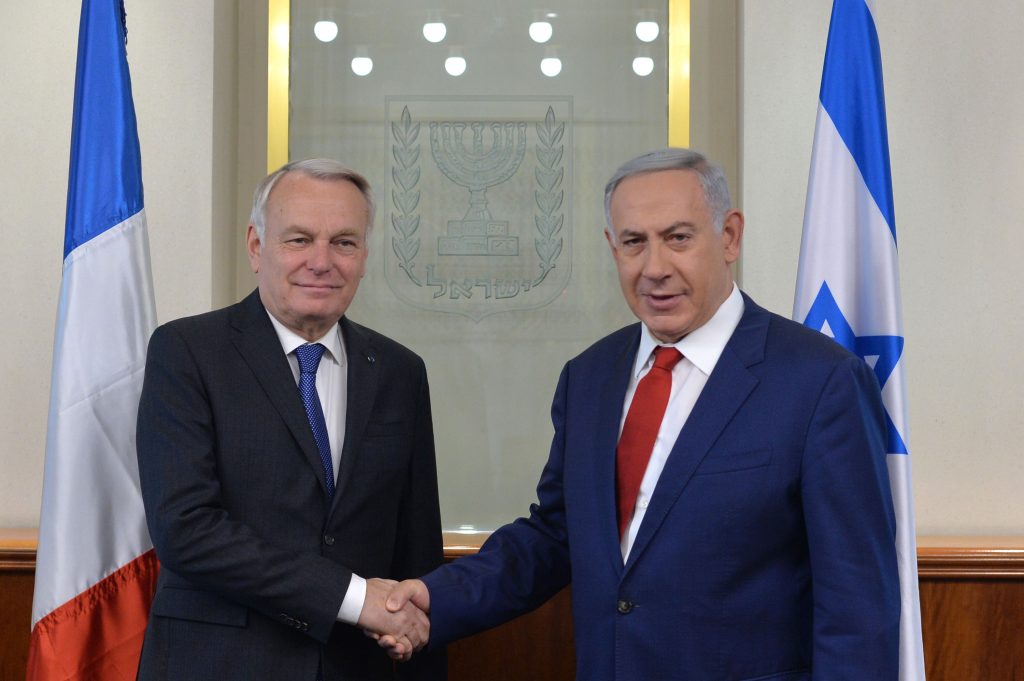 The Palestinians welcomed the proposal but Israel is concerned an international forum would try to dictate terms for a peace deal.

In public remarks to his Cabinet after meeting France’s Jean-Marc Ayrault, Netanyahu said: “I told him the only way to advance genuine peace between us and the Palestinians is through direct negotiations between us and them, without preconditions.”

“Our experience with history shows that only this way did we achieve peace with Egypt and Jordan and that any other attempt only makes peace more remote and gives the Palestinians an escape hatch to avoid confronting the root of the conflict which is non-recognition of the State of Israel. They simply avoid negotiating with us as part of their desire to avoid resolving the root of the conflict.”

Israel made the same arguments in the formal response it gave last month. France hopes an international conference would set out a framework for peace negotiations after U.S. efforts to broker a two-state deal collapsed in April 2014.

Netanyahu also said that he told the French foreign minister that Paris’s support of a recent UNESCO resolution on the holy sites in Yerushalayim cast doubt on the impartiality of a peace initiative it is promoting.

“I told him that the scandalous resolution accepted at UNESCO with France’s support, that does not recognize the bond of thousands of years between the Jewish people and the Har HaBayis, casts a shadow over the impartiality of the entire forum France is trying to convene,” Netanyahu said.

“He told me that this decision stemmed from a misunderstanding and that he would personally see to it that it does not recur,” said Netanyahu.

After meeting Netanyahu, Ayrault travelled to Ramallah to discuss the initiative with Palestinian leader Mahmoud Abbas.

“I know that Netanyahu does not agree (to the French proposal),” Ayrault told reporters after his talks with Netanyahu and a meeting with Palestinian leader Mahmoud Abbas.

Ayrault said France would continue to pursue the initiative and that its ultimate goal was for both sides to return to direct talks, with international intervention laying the groundwork.

“It is very clear to us, and I said this today to both the prime minister and to President Abbas, that we cannot take the place of the two parties,” he said at Tel Aviv’s Ben-Gurion airport at the end of a one-day visit to promote the plan.

“Only they can conduct direct negotiations to achieve a solution,” Ayrault said. “But because things are currently stuck … external intervention is necessary to provide renewed momentum.”

An international gathering, planned for May 30 in Paris, is set to include the Middle East Quartet (the United States, Russia, the European Union and the United Nations), the Arab League, the U.N. Security Council and about 20 countries, without Israeli or Palestinian participation.

Diplomats say that meeting will package all economic incentives and other guarantees that various countries have offered in previous years to create an agenda for a peace conference in the autumn.