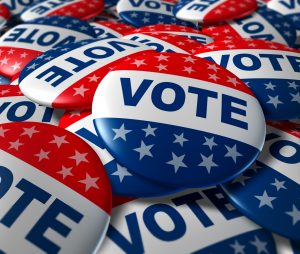 Democrats hold a registration advantage over Republicans in four of seven battleground states likely to play a central role in the presidential election, even as Republicans and independents have made gains.

The party that now controls the White House is ahead in registered voters in Florida, Nevada, North Carolina and Pennsylvania, while Republicans hold the lead in Colorado, Iowa and New Hampshire, according to data compiled by Bloomberg Politics. Three other likely battlegrounds — Ohio, Virginia and Wisconsin — don’t register voters by party.

Democratic President Barack Obama won nine of those 10 states in 2012, with the exception being a roughly 2-percentage-point loss in North Carolina. As an expected general-election contest between Republican Donald Trump and Democrat Hillary Clinton comes into focus, the states included in the analysis where Democrats hold a registration advantage have a combined 70 electoral votes, while the ones where Republicans have an edge account for 19.

None of that suggests the Democrats or Republicans will win any of those states, and being registered with a given party doesn’t always translate to voting for that party’s presidential candidate. Trump, for example, has also argued that he will have a strong crossover appeal and will be able to win over independents and some Democrats, while Clinton has been appealing to moderate Republicans who dislike the billionaire real-estate developer. There’s also still plenty of time for the numbers to change before November, since registration deadlines don’t arrive in most states until October.

Based on current registration data and numbers from a similar time four years ago, the findings do reveal one important baseline for each party as they map out their plans to win the White House and make gains in Congress. The drive to register new voters will accelerate throughout the summer and fall, with the parties, non-profit organizations and the campaigns spending millions to gain an advantage.

“In a handful of states, it’s already begun,” said Pratt Wiley, national voter outreach director for the Democratic National Committee. “Ohio has a field team in place that will only grow exponentially over the course of the campaign season. Their primary task right now is to register voters.”

One other key variable is the significant growth since the last presidential election of those registered as independents, a reflection of dissatisfaction with both parties. Those unaffiliated voters grew in many of the states at a faster rate during the period than registrations of Democrats or Republicans. In Colorado, for example, registration of Democrats grew 12.6 percent and Republicans by 4.4 percent during the four years, while independents grew by 18.3 percent.

Independents, always a key part of trying to win a presidential election, represented 29 percent of the overall electorate in 2012, according to exit polls. Republican Mitt Romney won 50 percent of that vote, with Obama at 45 percent.

Over the past four years, Republicans have shown greater overall registration growth in the battleground states. The GOP added almost 614,000 voters in the seven states reviewed, while Democrats have gained about 289,000.

After placing less emphasis on voter registration than Democrats in previous election cycles, Republicans have repeatedly said they’re making it a greater focus in 2016. As part of that effort, the Republican National Committee used its nationwide voter database a year ago to create community “turfs,” including more than 1,300 in battleground states. In those areas, volunteers and paid staff will work to register new voters and make contact with independents and infrequent Republican voters.

Democrats have traditionally placed greater emphasis on expanding the electorate through registration because many of their supporters, including students and minorities, have a lower rate of registration and are more geographically mobile, meaning they need to update their address information.

“There’s also a lot of low-hanging fruit out there,” Wiley said, referring to such voters. “If we can get to them shortly after a move, those are folks you don’t need to talk to later on in the cycle.”