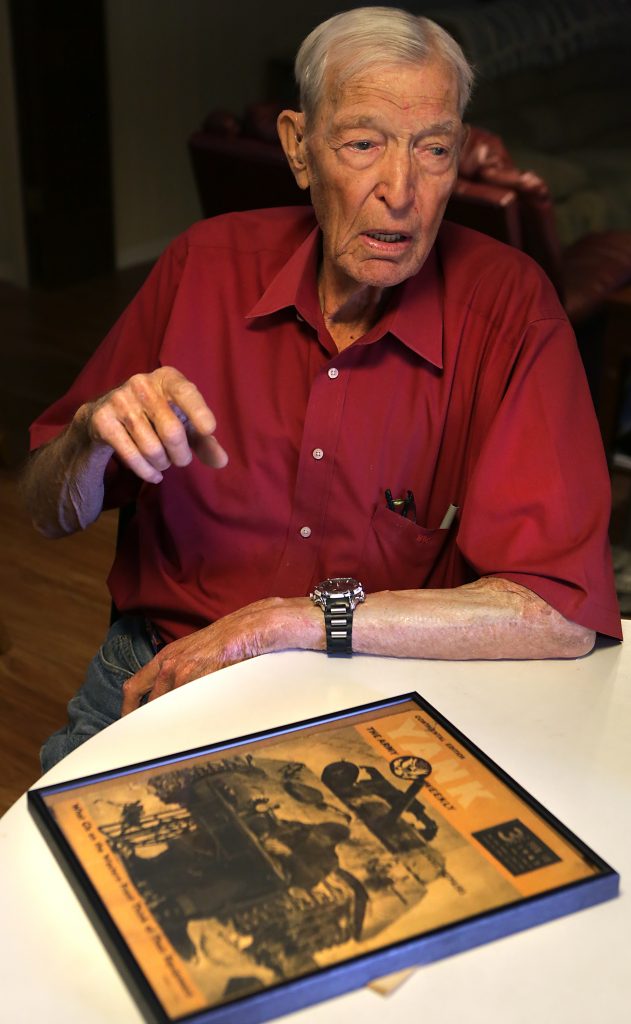 William Phelps wore a first sergeant’s stripes at the unlikely age of 19 as a World War II tank gunner, heard Gen. Dwight D. Eisenhower’s unvarnished opinions over lunch one day and made the cover of Yank magazine in 1945 in a memorable photo of him patching his trousers with a sewing machine in front of a tank.

But his most important day in Europe was in liberating a Nazi extermination camp in Austria.

Outside Linz, Phelps and two dozen soldiers entering the Mauthausen concentration camp 71 years ago last week were stunned at the sight of dead, dying and emaciated prisoners. The Americans saw German guards in the distance running for their lives, prisoners killing some of them with rocks and clubs.

“I’ll tell you, it’s really tough for me to describe because when you come into something like that, you haven’t seen a hundred people naked and stacked up, shriveled up all over the place, and it was unbelievable for me and most of the troops that were there,” Phelps, 90, of San Antonio, told the San Antonio Express-News.

“We’d seen dead Germans because that’s what we were paid to do. We had to kill them or they had to kill us. But you didn’t have a stack of a hundred people, 200 people, 300 that had been laying there for days.”

As the week began, Phelps was back in Europe, where he visited the Auschwitz concentration camp. A retired Army lieutenant colonel, Phelps and his daughter, Wanda Phelps, are part of a tour organized by the group 50 Friends of the Israel Defense Forces, or FIDF, that journeyed to Europe with Holocaust survivors, GI liberators and Israeli troops.

They flew Monday from Poland to Israel to mark Yom Hazikaron, Israel’s Memorial Day for fallen soldiers and victims of terror, as well as the country’s 68th Independence Day.

“This mission is one of the last opportunities for survivors and liberators to share their stories together,” said Peter Weintraub, national president of FIDF, a nonprofit educational group founded in 1981 by Holocaust survivors.

“It promises an incomparable emotional experience for everyone involved,” he added.

The tour did not include Mauthausen, a facility designed to be the last stop for criminals, political prisoners and religious conscientious objectors but that later also housed accused communists, Jews and defeated refugees from the Spanish Republic who had fought Gen. Francisco Franco.

The Nazis meant to work them to death, but many perished in other ways, including hunger, exposure to the cold, in gas chambers, and in operations where doctors observed how long a person could live after critical organs were removed. The U.S. Holocaust Memorial Museum said 197,464 entered the Mauthausen camp system from 1938 to 1945, and at least 95,000 died there, 14,000 of them Jews.

Phelps’ journey from a Gonzales County ranch to the gates of Mauthausen was a bit of an accident. At 17, he entered an Army Air Corps boot camp in 1944 at Sheppard Field in Wichita Falls, hoping to become a pilot. Phelps qualified for flight training but the school was closing. He was sent to armor training in California.

Phelps fought in the Battle of the Bulge with the 11th Armored Division’s 42nd Tank Battalion, part of Gen. George S. Patton’s Third Army. On Jan. 1, 1945, he was part of a four-man light tank crew commanded by Lt. Eli Warach, leading a group ordered to clear a road to besieged Bastogne.

The tank was engaging German infantry as it rolled toward a tree line. The crew had not been told to expect enemy tanks, but suddenly, there they were, “as far as the eye could see to the right of us, to the left of us and in front of us. Big tanks,” Warach later wrote in a history of the battle.

Outmatched by the Tigers, the Americans were shredded. Phelps’ tank lost half a track to an 88mm shell and was slipping and sliding on snow and ice, but somehow knocked out a Tiger, setting it on fire. The tanks behind them suffered heavy losses.

It took more months of fighting to bring Phelps to Mauthausen’s front gate. He came home, stayed in the Army, fought in Korea and later in Vietnam. He returned to Mauthausen in 2010 and was looking forward to one more trip to Europe, where the Yank magazine cover had made him something of a celebrity, Wanda Phelps said.

Despite living so close to death and going months without a shower, Phelps could recall the lighter side of war, and joke about it. There was the time Patton directed heavy vehicle traffic at an icy, muddy intersection in Belgium, not long after the Bulge, wearing his best uniform and trademark ivory-handled revolver.

“I had a driver and I got on the phone and I said, ‘If you spin these tracks on this road when we pass Patton and we slide off the road, I’m going to shoot you in the back of the head,’ ” Phelps recalled, chuckling. “‘Can you remember that? ‘Oh, yes, sir.'”

When Ike showed up at a mess hall, he asked to talk with the enlisted men. Phelps was his escort.

“Eisenhower asked if they were getting enough food, and they all lied. So we hit the last man in the line and he was the company ‘eight-ball.’ Every company has an eight-ball, it’s a guy that’s always in trouble,” Phelps said. “He never shaves, never has a neat uniform on, [never] gets a haircut. He just does what he wants to do. And so when Gen. Eisenhower asked him the same question, he looked at the general and said, ‘General, I don’t eat this [garbage].'”

Eisenhower promoted the eight-ball to staff sergeant on the spot, Phelps said.

The general sat with Phelps at a small table, eating from a GI mess kit and talking of his respect for Patton and Winston Churchill, his dislike of British Field Marshal Bernard Law Montgomery, and his distrust of his own staff.

“Ike talked about his staff a lot, just in conversation to me by saying — and it surprised me — that he didn’t like it when he had a staff that is trying to tell him something that they think he wants to know,” Phelps recalled.