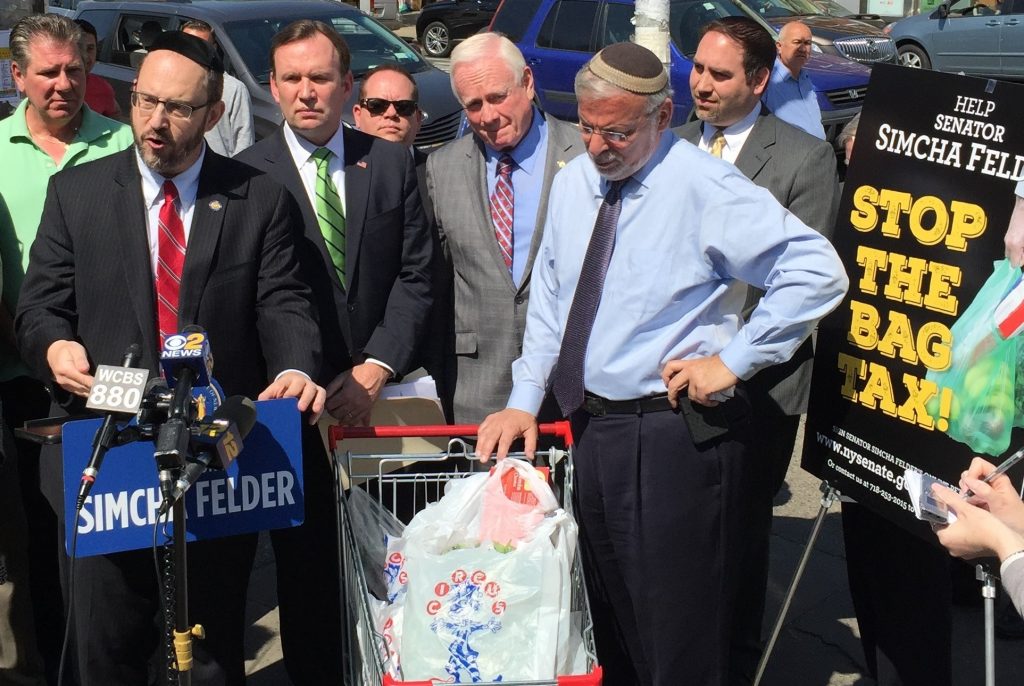 The bill’s sponsors say that the shopping-bag fee amounts to a tax, which the state constitution only allows to be passed by the state legislature.

The shopping-bag fee, which was passed by the New York City Council and which Mayor Bill de Blasio has said he will sign, “is a misguided attempt that will only squeeze more money from the hardworking families of our City,” said Cusick.

The press conference was held outside the Circus Fruits market on Fort Hamilton Parkway and 59th Street in Sunset Park.

“New Yorkers are very smart,” said Felder. “When are our elected officials and bureaucrats going to stop deciding what’s best for New Yorkers, and let New Yorkers decide for themselves?”

As dozens of shoppers in the massive produce market busily filled their own bags with fruits and vegetables, Sen. Marty Golden held up a number of bags in his hand, acting out a shopping trip, miming putting one type of fruit into each bag, followed by, “That’s five cents.”

The politicians said that the cost will fall on struggling working-class families, many of whom use dozens of shopping bags per shopping trip.

“There are so many families that struggle to pay for their groceries in and of itself, and forcing New Yorkers to choose between paying a fee and bringing reusable bags every time they go to the supermarket will undoubtedly burden them even more,” said Hikind. “The role of government is to work for the people, not against them.”

Sen. Savino said, “We have yet to hear from a single resident … across the city of New York who thinks this is a good idea, except the sponsors in the City Council.”

In response to a question about whether Gov. Cuomo would sign or veto S. 7336, Felder said, “We will have enough votes to override [a veto] if Cuomo is not on board.”

“I hope he is on board, since this is New York City,” said Felder, in a joking reference to Cuomo’s long-running feud with de Blasio.

Senator Felder and Assemblyman Cusick will hold a public hearing on the bill on May 20, at the State Office Building at 250 Broadway in Manhattan.