As They Gear Up for Trump Visit, GOP Tries to Change Subject

By Stephanie Akin and Lindsey McPherson 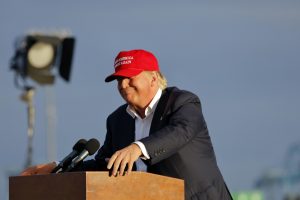 On the eve of Donald Trump’s first visit to Congress as the presumptive Republican nominee, the party’s lawmakers have a message for the media: Can we talk about something else, please?

With Trump scheduled to sit down with House Speaker Paul D. Ryan and other party leaders in the House and Senate on Thursday, Ryan’s press office sent out a missive to the media Tuesday asking for some coverage on other issues. Sen. Roy Blunt, R-Mo, joked that he was about to issue a moratorium on Trump questions. And some lawmakers continued a strategy popular on the Hill since the beginning of the Trump run: They avoided saying the candidate’s name altogether.

The dueling approaches — meet with Trump, yes; acknowledge his power over the party, not really — run contrary to a growing national embrace of Trump and his steamroller of a campaign. They also signal that the party elite’s deep discomfort with Trump is likely to last well beyond November, even though some Republicans have begun to embrace him, Republican analysts have said.

The schism was apparent this week in the public comments from party leaders and the asides they presented as straight talk with media insiders.

Details of Trump’s visit to Congress trickled out this week. Ryan will meet with Donald Trump and Republican National Committee Chairman Reince Priebus at 9 a.m. Thursday at the Republican National Committee, a source familiar with the meeting said. Immediately following that meeting, Ryan will hold a second meeting with Trump and House Republican leaders Kevin McCarthy, Steve Scalise and Cathy McMorris Rogers. Senate GOP leaders will meet with Trump at 11:45 a.m.

A source familiar to Ryan said Trump supporter Ben Carson’s team reached out and asked to speak with Ryan ahead of his meeting with Trump on Thursday morning and the teams have scheduled a phone call between the speaker and the former Republican presidential candidate.

But as Ryan’s staff was confirming such tidbits, a request from his spokeswoman also arrived in reporters’ inboxes.

“While it’s a busy week on the political front, it also happens to be an important week on the floor of the U.S. House of Representatives,” Spokeswoman AshLee Strong wrote in an open letter Tuesday. The letter reminded reporters that the House is voting on a series of bipartisan bills that will constitute the first major congressional action on the nation’s opioid epidemic.

Blunt, meanwhile, expressed his fatigue on the Trump subject to reporters in the Senate.

“Sometime in the next 24 hours I may do a total moratorium on any Trump questions in this building and just refer you to the office who knows how many times I’ve already answered the Trump questions,” Blunt reportedly said Monday. Even senators who had previously said they would support Trump avoided saying his name to reporters, according to a Talking Points Memo report.

The party did have a legitimate reason to be upset: Republican strategists say that Trump has put the GOP’s control of the Senate in doubt. One Senate campaign veteran last month estimated that the party had a 75 percent chance of losing the majority. Another put the odds at 80 percent. Colorado and Nevada, two western states that had been considered the party’s best bet for flipping from blue to red are now in doubt because of large Latino populations who have largely rejected Trump.

But not everyone is resisting.

On Wednesday, House Majority Leader Kevin McCarthy told reporters that he is supporting Donald Trump, and he hopes the speaker and other Republicans can back him, too.

“I’d like the party unified,” the California Republican said. “A House divided cannot stand. I’ve watched the last eight years, and we don’t need another four of that.” McCarthy said that unification in his mind involves putting small differences aside and focusing on an agenda for how America will look 50 years from now.

Two longtime Republican operatives at the center of the party establishment, Ed Rollins and Ron Kauffman, signaled their support for the front-runner last week. The Wall Street Journal editorial board dismissed calls for a third-party conservative challenger.

The voters, meanwhile, have indicated solid support for the nominee in a poll released Tuesday by Public Policy Polling.

That poll showed that three-quarters of Republicans — 72 percent — accept Trump as their presidential nominee.

As their leaders get ready to meet with Trump, rank-and-file House Republicans told them during a conference meeting Wednesday morning that they too want to meet with the likely nominee. Members got a “resounding reaction” when they asked that, Rep. Matt Salmon, R-Ariz., said.

The message, Salmon said, was, “OK, great that they’re meeting with leadership, but since we’re going to be working with whoever the president is, he should come and address the whole conference and spend not just an hour of conference time, but it should be — maybe we should dedicate a half of day to just having questions and answers.”

McCarthy said the leaders will ask Trump during their meeting on Thursday if he will meet with the full Republican conference.

“Anytime you want to unify the party, when you have the nominee there with the entire conference, it would be helpful,” McCarthy said. “Everybody could ask their questions. You could hear the answers directly.”