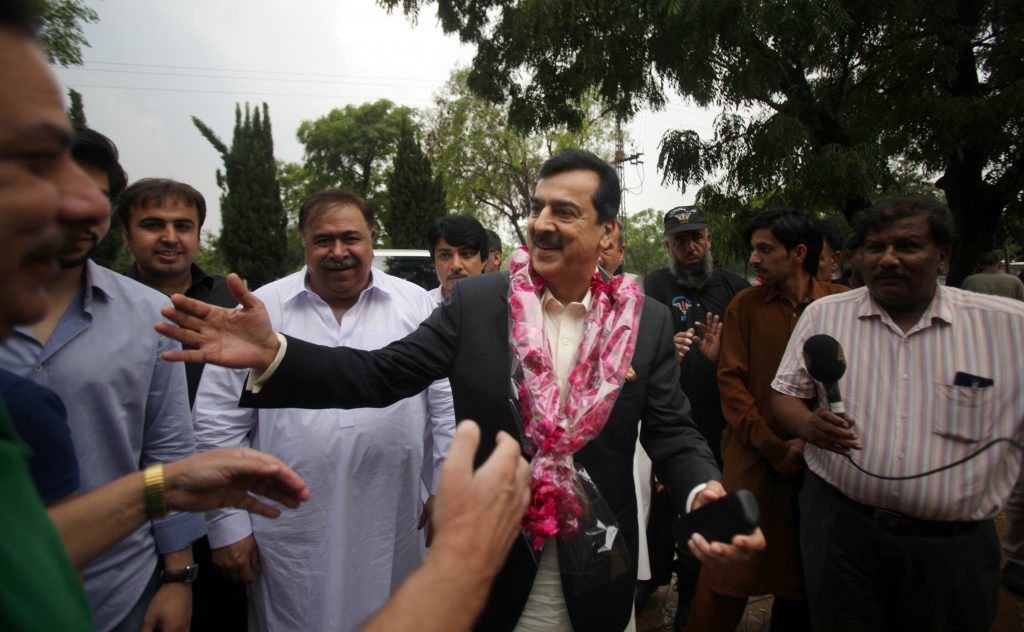 U.S. and Afghan forces conducting a raid Tuesday against Islamic militants unexpectedly found and rescued the son of a former Pakistani prime minister who had been abducted three years ago, officials said.

Ali Haider Gilani, believed to be about 30, was discovered during the raid near Afghanistan’s eastern border with Pakistan. The operation killed four of the extremists, the officials said.

Gilani is the son of Pakistan’s former Prime Minister Yusuf Raza Gilani, who celebrated the rescue with his family. His secular anti-Taliban Pakistan People’s Party has led several major offensives against Islamic militants.

Gilani was being taken to the Pakistani Embassy in Kabul, although officials there said he had not yet arrived, according to Zafar Hashemi, a spokesman for Afghan President Ashraf Ghani.

The raid took place in the Gayan district of Paktika province, Hashemi told the Associated Press.

It was conducted under the authority of the U.S. anti-terrorist mission in Afghanistan, Operation Freedom’s Sentinel, according to the U.S. military in Afghanistan.

“Four enemy combatants were killed as a result of the operation. No other injuries or damage was observed or reported,” the U.S. statement said. The counterterrorism mission was “planned and launched after evidence of terrorist activity was confirmed,” it added.

A spokesman for Afghanistan’s National Security Council, Tawad Ghorzang, told reporters in Kabul that the rescue took place during an ongoing operation against al-Qaida and other militants.

The operation was not specifically seeking Gilani, but came across him as it was being carried out, Ghorzang said. Gilani was in good health and “will soon be handed through diplomatic channels to Pakistan,” he added.

The purpose of the operation “was to go after al-Qaida-related targets in the area, and there was an indication that there may have been a hostage being held with them,” Cleveland said. “So it was a nice surprise to get that.”

Gilani had been held in a compound occupied in the Gayan district by al-Qaida operatives, he said, though the “rescue happened outside the compound.”

“He (Gilani) was the sole noncombatant. He didn’t fight back, so we picked him up,” he said. U.S. forces would return Gilani to Pakistan once medical checks and other procedures at Bagram were completed, he said.

The Pakistani government was expected to send a plane to Kabul to collect him, Cleveland added.

The elder Gilani, who served as prime minister from 2008 to 2012, said last year that the kidnappers demanded the release of several al-Qaida prisoners in exchange for his son. He also said that the captors had let his son talk to him by phone for eight minutes, and that he was being held somewhere in Afghanistan.

Gunmen kidnapped the younger Gilani in May 2013, several days before the general elections in his central Pakistani hometown of Multan. There was no claim of responsibility for the abduction, but suspicion immediately fell on the Taliban.

The Pakistani Taliban fought the state for over a decade, killing tens of thousands of people in a bid to install their own harsh Islamic system.

Ghorzang said the U.S.-Afghan raid targeted al-Qaida and other militants. The fact that Gilani was found inside Afghanistan – quite far from where he was abducted in Pakistan – indicated he might have changed hands between militant groups.

The former captive’s brother, Abdul Qadi Gilani, praised Afghan authorities and Pakistan army chief Gen. Raheel Sharif for the rescue, adding that Sharif had called their father about it.

A jubilant elder Gilani was seen on a Pakistani broadcast attending an election rally after hearing the news.

“This is a very good day for me,” the father said.

“I am very happy and I have no words to express my joy,” added the brother, Abdul Qadir Gilani.

Pakistan Prime Minister Nawaz Sharif expressed pleasure over the rescue, while the current leader of the People’s Party, Bilawal Bhutto Zardari, said on Twitter the Afghan ambassador in Islamabad had called the elder Gilani to tell him about his son.