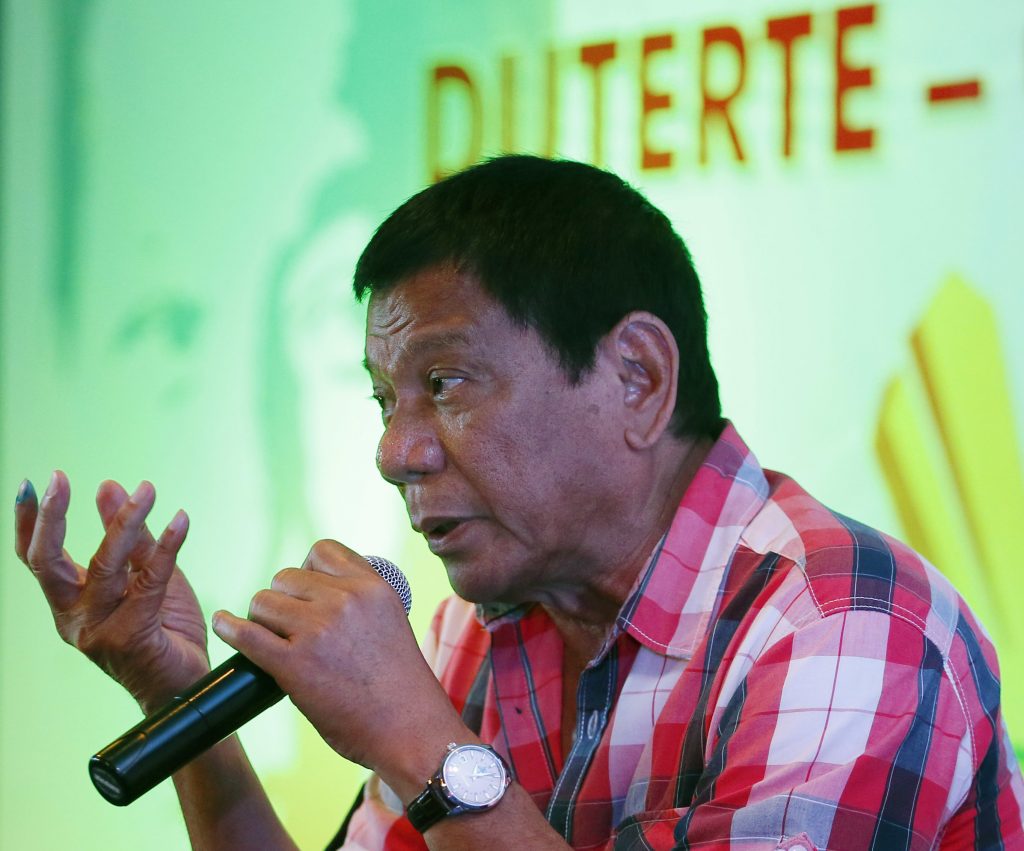 Rodrigo Duterte, the bombastic mayor of a major southern Philippines city, was heralded Tuesday as president-elect of the Philippines after an incendiary and populist campaign that projected him alternatively as an emancipator and a looming dictator.

“Our people have spoken and their verdict is accepted and respected,” outgoing President Benigno Aquino III’s spokesman Sonny Coloma said in a statement. “The path of good governance … is already established as all presidential candidates spoke out against corruption.”

Former Interior Secretary Mar Roxas, who was running second behind Duterte in the unofficial vote count following Monday’s election, conceded defeat. “Digong, I wish you success,” Roxas said at a news conference, using Duterte’s nickname. “Your victory is the victory of our people and our country.”

Duterte’s harshest critic also conceded that the mayor, known for his off-color remarks and pledges to kill criminal suspects, had emerged the unquestioned winner.

“I will not be the party pooper at this time of a festive mood,” Sen. Antonio Trillanes IV, who has filed a plunder complaint against Duterte, told The Associated Press. “I will step back, listen to his policy pronouncements. This time we don’t expect a stand-up comedy act but a president who will address the nation.”

Duterte, 71, himself has not spoken since casting his vote Monday, and remained at his home in Davao, on the southern main island of Mindanao.

Results from a semi-official count gave Duterte an unassailable lead, thrusting him into national politics for the first time after 22 years as mayor of Davao and a government prosecutor before that. In those two jobs, Duterte gained notoriety by going after criminals, although he was accused of carrying out hundreds of extrajudicial killings.

He has been compared to Donald Trump, the Republican presumptive presidential nominee, for his propensity for inflammable statements.

In the election for vice president, who is separately elected in the Philippines, the son of late dictator Ferdinand Marcos was trailing by a hair to a political neophyte, Rep. Leni Robredo, who is backed by outgoing President Benigno Aquino III.

During the three-month campaign, Duterte made audacious promises to eradicate crime and corruption within six months. His explosive outbursts and curses against the inequality and social ills that bedevil the Filipino everyman resonated among different class levels of the people, which his biggest political rivals clearly underestimated until he began to take a strong lead in opinion polls in the final weeks of the campaign.

He captured domestic and international attention with fiery speeches and undiplomatic remarks about Australia, the United States and China, all key players in the country’s politics.

He has not articulated an overall foreign policy, but has described himself as a socialist wary of the U.S.-Philippine security alliance. He has worried members of the armed forces by saying that communist rebels could play a role in his government.

He said he would talk with China about territorial disputes in the South China Sea but if nothing happened, he would sail to an artificial island newly created by China and plant the Philippine flag there. China, he said, could shoot him and turn him into a national hero.

He has also threatened to form a one-man rule if legislators in the Congress oppose him.

President Aquino went public against Duterte late in the campaign, saying the mayor may endanger the country’s hard-fought-for democracy and squander economic gains of the last six years, when the Philippine economy grew at an average of 6.2 percent, one of the best rates in Asia.

Aquino, whose parents were democracy champions who helped topple the senior Marcos, also campaigned against Marcos Jr., who has never clearly apologized for economic plunder and widespread human rights abuses under his father. Filipinos have been hypersensitive to potential threats to democracy since they ousted the elder Marcos.

On Monday Duterte was asked to comment about his image as a mass-murder advocate. He replied without elaborating, “I’m sure that there will be a resurrection one of these days.”