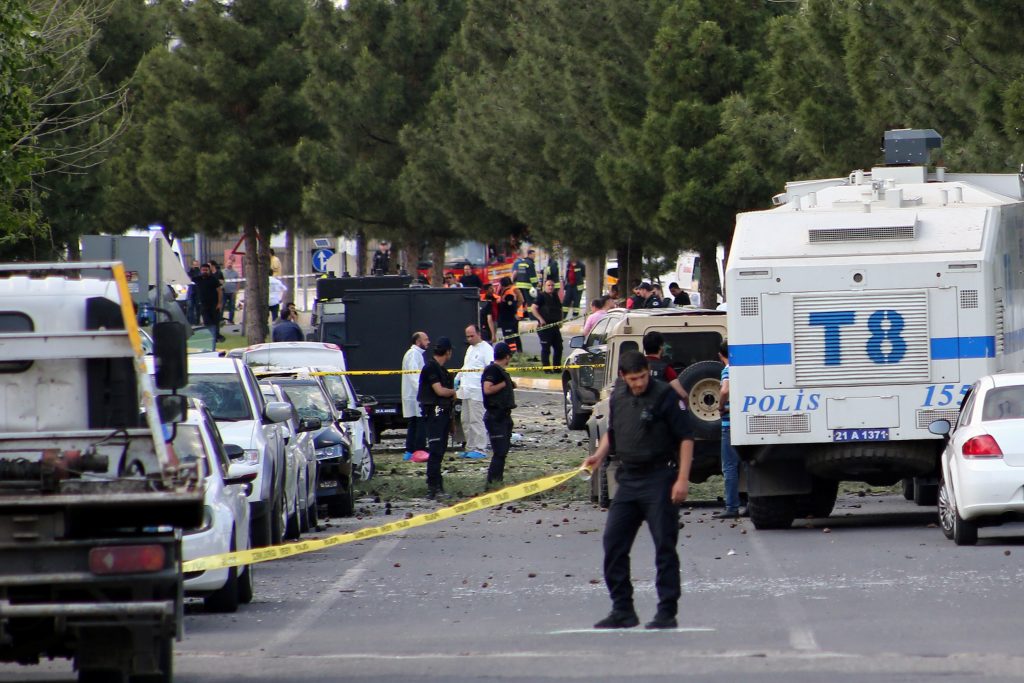 A car bomb on Tuesday struck a police vehicle that was carrying officers escorting seven recently detained Kurdish militants in the mainly-Kurdish city of Diyarbakir, killing three people and wounding 45 others, officials said.

No group had claimed responsibility for the attack in Diyarbakir’s Baglar neighborhood, but the state-run Anadolu Agency said it was carried out by the outlawed Kurdistan Workers’ Party, or PKK, as the bus was passing by.

The police vehicle was transporting nine police officers taking the seven suspected PKK militants for medical checks. The three victims were seriously wounded in the attack and later died in hospital, the Diyarbakir governor’s office said in a statement.

It was not immediately clear if the dead included any of the PKK suspects or police officers.

A total of 12 police officers and 33 civilians were wounded in the attack, including people who were passing by or sitting at a nearby open-air café, the statement said.

The seven PKK suspects inside the vehicle were detained for allegedly seizing a factory in Diyarbakir, the governor’s office said, without providing details.

Kurdish rebels have been targeting police and military targets since July, when a fragile peace process collapsed.

Earlier Tuesday, two police officers were killed while attempting to defuse a roadside bomb in the eastern province of Van, Anadolu said.

The agency also blamed those deaths on the PKK. Ankara and its allies consider the group a terrorist organization, and Anadolu said air-backed operations were underway to hunt down Kurdish rebels in Van.

The PKK, which wants greater autonomy for Turkey’s Kurds, has waged a decades-long insurgency against the Turkish state in a conflict that has claimed 40,000 lives.

PKK-linked rebels have staged multiple bomb attacks against Turkish police and troops, which in turn have carried out tank-backed security operations in flashpoint areas.