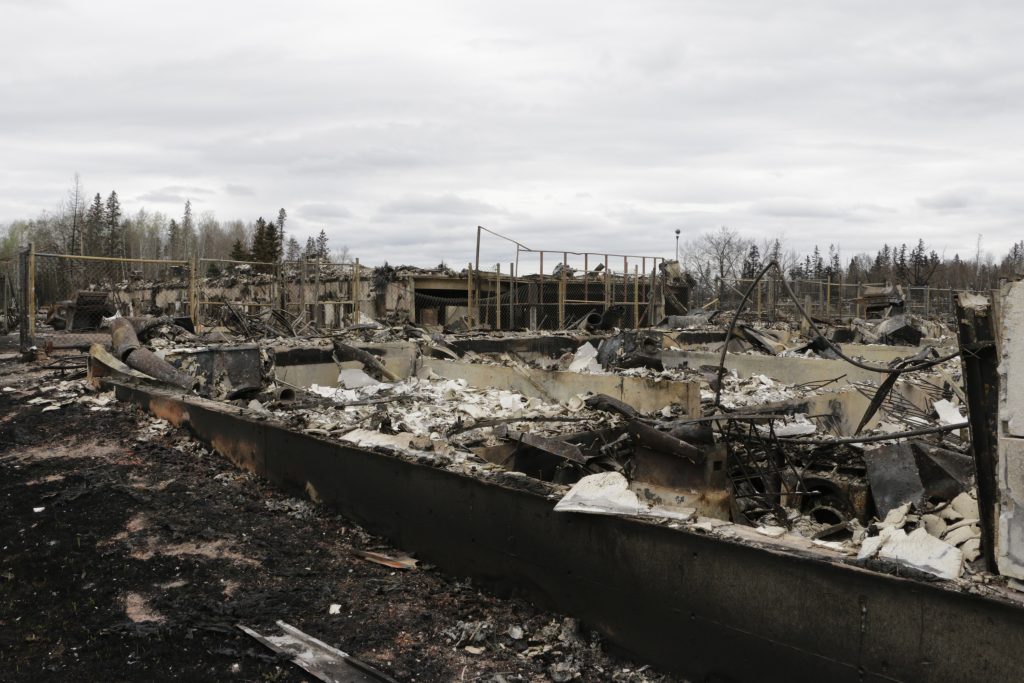 Alberta Province premier declared Canada’s oil-sands city saved and said a plan will be put together within two weeks so that 88,000 residents forced to evacuate can return to their homes.

At least two neighborhoods in Fort McMurray were scenes of utter devastation with incinerated homes leveled to the ground from a wildfire that the city’s fire chief called a “beast … a fire like I’ve never seen in my life.”

But the wider picture was more optimistic as Fire Chief Darby Allen said 85 percent of the city remains intact, including the downtown district.

Alberta Premier Rachel Notley said about 2,400 homes and buildings were destroyed, but firefighters managed to save 25,000 others, including the hospital, municipal buildings and every functioning school.

“This city was surrounded by an ocean of fire only a few days ago, but Fort McMurray and the surrounding communities have been saved and they will be rebuilt,” Notley said.

Notley said there will be a meeting Tuesday with the energy industry to discuss the state of their facilities and the impact on operations. She got her first direct look at the devastation on Monday after cold temperatures and light rain had stabilized the massive wildfire to a point where officials could begin planning to get thousands of evacuated residents back.

The break in the weather left officials optimistic they’ve reached a turning point on getting a handle on the massive wildfire. The temperature dipped to 45 degrees Fahrenheit on Monday following a week where the region had unseasonably warm temperatures.

Notley flew in Monday to meet with local officials and took a ground tour of the town before holding a news conference at the emergency center.

“I was very much struck by the devastation of the fire. It was really quite overwhelming in some spots,” Notley said. “But I will also say that I was struck by the proximity of that devastation to neighborhoods that were untouched.”

More than 40 journalists were allowed into Fort McMurray on a bus escorted by police. The forest surrounding the road into town was still smoldering and there were abandoned cars. Only the sign remained at a Super 8 Motel and Denny’s restaurant on the edge of town.

The Beacon Hill neighborhood was a scene of utter devastation, with homes burned to their foundations.

Allen said that at one point in Beacon Hill the fire jumped across a road that is 15 to 20 feet wide.

“It jumped that without thinking about it. This was a beast. It was an animal. It was a fire like I’ve never seen in my life,” he said on the media bus.

In the early stages of the fire he feared that as much as half the city could burn down. Allen said that at one point the fire raced down a hill to the corner of a bank, but firefighters were able to halt the encroaching flames at the bank. Had they failed to stop it there, the fire would have destroyed the downtown district, he said.

But other neighborhoods were not spared. In the Abasand district townhouses were completely destroyed, and charred children’s bikes could be seen in backyards. A parking facility was burned to the ground.

“I just want everyone to know that there were hundreds of people, emergency services staff, that gave their all,” Allen said. “I do truly believe we couldn’t do any more. This was a horrible fire. Whatever we tried to do, it went a different way and it found some new fuel so we [had to do] our very best.”

About 88,000 people have been forced out of Fort McMurray since the fire broke out a week ago in the heart of Canada’s oil sands region. The bulk of the city’s evacuees moved south after a mandatory evacuation order, but 25,000 evacuees moved north and were housed in camps normally used for oil sands workers until they also could be evacuated south.

Gas has been turned off, the power grid is damaged and water is undrinkable in Fort McMurray. More than 250 power company workers are trying to restore the grid and assess the gas infrastructure.

“We are now turning our minds more and more to the recovery effort,” Federal Public Safety Minister Ralph Goodale said.

“This is going to be a long-term endeavor because at the moment there is no power and gas, no palatable water supply. There’s dangerous hazardous material all over the place. It’s going to take a very careful, thoughtful effort to get that community back in a livable condition,” Goodale said.

Notley said the fire continues to grow outside the city and now is about 790 square miles in size.

No deaths or injuries have been reported from the fire itself. But the fire has forced as much as a third of Canada’s oil output offline and was expected to impact an economy already hurt by the fall in oil prices.

Alberta’s oil sands have the third-largest reserves of oil in the world behind Saudi Arabia and Venezuela. Its workers largely live in Fort McMurray, a former frontier outpost-turned-city whose residents come from all over Canada. Officials said the fire didn’t reach the Suncor or Syncrude oil sands facilities north of Fort McMurray, and that the oil mines to the north are not threatened.

Analysts at Goldman Sachs estimated the wildfire has reduced Canada’s oil sands production by a million barrels per day, but said in a note that the lack of damage to the oil mines could allow for a fast ramp-up in production. They noted, however, that the complete evacuation of personnel and of the city could point to a more gradual recovery.