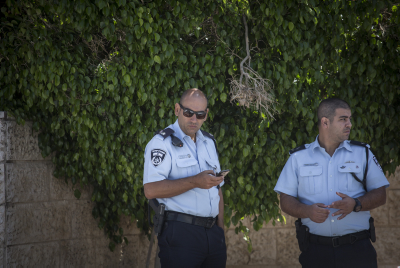 A briefcase of top secret documents was recently stolen from the home of one of the top officers in the Israel Police, the Walla news site said. According to the site, the briefcase, belonging to an officer in charge of cybersecurity for police, was stolen off the dining room table in his home. Police believe that it was extracted from the home via an open window, with the thief grabbing the briefcase off the table with the assistance of a garden implement.

Also taken were the house keys to the home and a wallet. Police are investigating, as are officials of the national cybersecurity unit, whose work is likely to be affected by the leak.

Officials are trying to determine if the briefcase was stolen because of its value, or was just the “victim” of a random theft. Police tend to believe the latter, but police are not ruling out the possibility that the official was a specific target. The thief stole the official’s house and car keys – but left the car in its place, atypical behavior for a neighborhood thug.

Police said in a statement that a robbery was reported, but due to privacy issues they could not discuss the case.