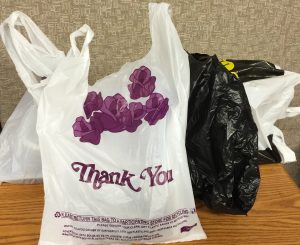 Despite much protest from local politicians over New York City’s newly passed law imposing a five-cent surcharge on plastic bags, Boro Park grocers and shoppers seemed to be taking the impending fee in stride. Since the measure was approved by the City Council last week, several of the neighborhood’s representatives have pledged to fight it on the state level, calling it a “regressive tax.” But while retailers and shoppers mostly felt the legislation was unnecessary and would prove ineffective, they saw little to scream about.

One consumer said that he and other residents would likely find ways around the mandatory surcharge.

Said one shopper, “I’ll get boxes — of course, then the stores will have to start charging for those also, or I’ll go to the pharmacy for more items.” Actually, the plan to purchase more food items at drug stores would not be an effective means of bypassing the fee, as they too are covered by the legislation.

Despite his own creative approaches, he felt that most people would “not think about it so much,” and become quickly accustomed to the small expense. He dismissed the notion that the city’s law would actually reduce plastic bag use.

“People are not going to start walking around with canvas sacks; you look like an old grandmother.”

An employee at Parkville Food Center disagreed, saying that while some shoppers would inevitably opt for deliveries more often, the small charge would decrease the use of bags.

“I think it will work. In Europe, a lot of people go around with sacks; people could do it here too.”

In the wake of the bill’s approval and a pledge from Mayor de Blasio to sign the measure into law, State Senator Simcha Felder and Assemblyman Michael Cusick of Staten Island introduced state legislation that would block the charge, charging that the legislation is a “nickel and diming” of the population. Their efforts were supported by Assemblymen Dov Hikind and Chaim Deutsch. Councilman Brad Lander, who represents parts of Boro Park and Kensington, is a key sponsor of the bill.

Advocates claim that in the 150 other municipalities around the country with similar laws, bag use has decreased significantly.

While many opponents admit that reduction in use of the non-biodegradable bags that pose a major sanitation expense to the city is a positive goal, they argue that the expense unfairly burdens families. The charge is not a tax, strictly speaking, as the fee will be kept by merchants, not the city.

Mrs. Shnitzler, who was at the register at Mittelman’s Grocery, disputed the claim that large families would be disproportionately affected.

“They get their big orders in deliveries anyway, so I don’t think it will hurt them more than anyone else,” she said. “People will try to reuse the bags they have. After Pesach people were asking where are the Mittleman’s bags [which bear the name of the store]. I told them ‘Don’t complain, soon you’ll have to pay for them.”

Moshe Rosner of Rosner’s Grocery predicted that the charge could have unforeseen ripple effects on businesses.

“People will try to pack as much into a bag as possible and they won’t want to double bag anymore. What will happen? The bag will rip and then they really won’t be happy. Stores don’t want customers leaving with a bad taste in their mouths, so we’ll have to start buying stronger plastic bags.”

Mr. Rosner felt that the city’s goal was a noble one, citing the environmental concern as well as the “mess [plastic bags] make in the streets,” but was afraid the measure could lead to friction between retailers and consumers.

However, he felt that over time, city residents would adapt to the fee.

“What is it? Fifteen cents? Even a quarter, whatever it is, we’ll all get used to it.”

Lipa Solomon of ReFresh said that while customers might move towards making more deliveries as a means of avoiding the charge, this additional cost to stores would eventually drive prices up and come back to the buyers themselves.

“They’ll end up paying more in the end,” he said. “I think more people are going to start using re-usable bags. You’d be surprised, but some people come in with them to shop, even now.”

Shia Langsam of Fish to Dish, who happened to be in ReFresh at the time of our interview with Mr. Solomon, said that he had already heard complaints from his own patrons about the law.

“Customers are definitely upset about it,” he said. “But people will get used to it. I don’t think it will have a major effect.

One shopper questioned the legislation’s exemption for “food stamp” users.

“If it’s a tax, so then it makes sense to differentiate between rich and poor, but if it’s about the environment, then it’s defeating the purpose. People with money make big orders and get deliveries; food stamp users use more bags.”

The shopper was one of many voices who felt that the small fee would do little in helping the city accomplish its goal.

“People pay five cents extra for plastic bottles now and they don’t even know about it. At the end of the day, most people would rather pay a few extra cents than carry around a canvas bag. It’s not going to make people budge.”

Should efforts to block the measure fail, it is set to go into effect this coming October.