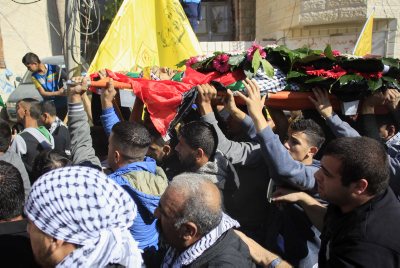 Despite an order to do so by the High Court, Public Security Minister Gilad Erdan said that he would not release the bodies of terrorists unless their families could guarantee that their funerals would not turn into focal points for anti-Israel incitement. “My policy will never change,” said Erdan. “Only families that accept the conditions laid out by police for funerals will receive the bodies of slain terrorists.”

The High Court on Friday demanded that the government begin returning the bodies of terrorists who were killed after committing terror acts. About a dozen bodies are in storage after they were shot by IDF soldiers. Most of the dead terrorists were residents of Arab neighborhoods of Yerushalayim.

The government had decided several weeks ago to no longer return the bodies of these terrorists to their families, because many of the funerals that were conducted turned into anti-Israel riots where incitement was rife. The bodies would be released only if the families guaranteed that they would hold quiet, late-night funerals with only family members in attendance.

The families appealed to the High Court, which ordered the state to show cause why the bodies should continue to be held. Instead, the state backed down, and the court ordered that the bodies be released within a month.

Last week, Palestinians greeted with cheers and shouts of “martyr” the body of the terrorist who ran down three IDF soldiers near Dolev in the Shomron on Tuesday night. The body was returned to the family in the Kalandiya area of Yerushalayim. The family held a mass funeral Wednesday.

The IDF several months ago instituted a policy whereby it would no longer return bodies of terrorists to their families if there was a suspicion that the funeral of the terrorist would turn into a major rally advocating terrorism, as has been customary among Palestinians. On Tuesday night, the government confirmed that it was returning the body of the terrorist who had been killed earlier in the evening. A spokesperson for Prime Minister Binyamin Netanyahu said the move was authorized by Defense Minister Moshe Yaalon and other defense officials.

Speaking on Army Radio last Wednesday, Yisrael Beitenu head Avigdor Liberman said that the government had gone “too far this time. The body was returned just a few weeks after the government announced that it would no longer do so. Netanyahu’s behavior not only makes fun of the public, but endangers Israelis by encouraging other potential terrorists to carry out attacks. It is time for Netanyahu to step aside.”