World Iraq Routed IS From Ramadi at a High Cost: A City Destroyed
World 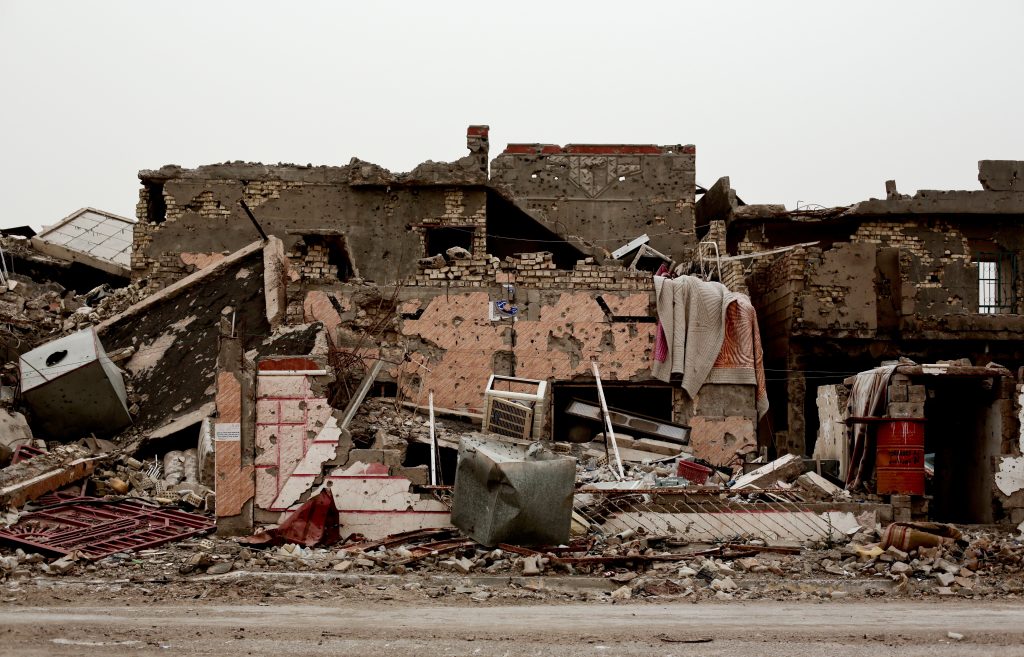 This is what victory looks like in the Iraqi city of Ramadi: In the once thriving Haji Ziad Square, not a single structure still stands. Turning in every direction yields a picture of devastation.

A building that housed a pool hall and ice cream shops — reduced to rubble. A row of money changers and motorcycle repair garages — obliterated, a giant bomb crater in its place. The square’s Haji Ziad Restaurant, beloved for years by Ramadi residents for its grilled meats — flattened. The restaurant was so popular its owner built a larger, fancier branch across the street three years ago. That, too, is now a pile of concrete and twisted iron rods.

The destruction extends to nearly every part of Ramadi, once home to a million people and now virtually empty. A giant highway cloverleaf at the main entrance to the city is partially toppled. Apartment block after apartment block has been crushed. Along a residential street, the walls of homes have been shredded away, exposing furniture and bedding. Graffiti on the few homes still standing warn of explosives inside.

When Iraqi government forces backed by U.S.-led warplanes wrested this city from Islamic State terrorists after eight months of IS control, it was heralded as a major victory. But the cost of winning Ramadi has been the city itself.

The scope of the damage is beyond that in other Iraqi cities recaptured so far from the terrorist group. Photographs provided to The Associated Press by satellite imagery and analytics company DigitalGlobe show more than 3,000 buildings and nearly 400 roads and bridges were damaged or destroyed between May 2015, when Ramadi fell to IS, and Jan. 22, after most of the fighting had ended. Over roughly the same period, nearly 800 civilians were killed in clashes, airstrikes and executions.

Now the few signs of life are the soldiers at checkpoints that have been newly painted and decorated with brightly colored plastic flowers. Vehicles pick their way around craters blocking roads as the dust from thousands of crushed buildings drifts over the landscape. Along one street, the only sign that houses ever existed there is a line of garden gates and clusters of fruit trees.

The wreckage was caused by IS-laid explosives and hundreds of airstrikes by the Iraqi military and the U.S.-led coalition. Besides the fighting itself, the Islamic State group is increasingly using a scorched-earth strategy as it loses ground in Iraq. When IS fighters withdraw, they leave an empty prize, blowing up buildings and wiring thousands of others with explosives. The bombs are so costly and time-consuming to defuse that much of recently liberated Iraq is now unlivable.

“All they leave is rubble,” said Maj. Mohammed Hussein, whose counterterrorism battalion was one of the first to move into Ramadi. “You can’t do anything with rubble.”

As a result, U.S.-led coalition and Iraqi officials are rethinking their tactics as they battle IS to regain territory. The coalition is scaling back its airstrikes in besieged urban areas. Efforts are underway to increase training of explosive disposal teams.

The new approach is particularly key as Iraq and the coalition build up to the daunting task of retaking Mosul, Iraq’s second-biggest city, held by IS for nearly two years.

“They know they can’t just turn Mosul into a parking lot,” said a Western diplomat in Baghdad who has been present for a number of meetings with coalition and Iraqi defense officials regarding the Mosul operation. The diplomat commented on condition of anonymity because he was not authorized to speak to the press.

In January, after IS was pushed out of Ramadi, thousands of families returned to their homes. But residents have since been barred from coming back because dozens of civilians died from IS booby traps. Officials estimate IS planted thousands of IEDs, improvised explosive devices, across the city. Janus Global Operations, an American firm, began working to remove them last month and said it has so far cleared more than 1,000 square meters — a fraction of a city block.

The vast majority of the city’s population remains displaced.

Ramadi lies on the Euphrates River west of Baghdad and is the capital of Iraq’s Sunni heartland, Anbar province. Even as IS swept over most of the province and northern Iraq in 2014, Ramadi had held out under tenuous government control. After months of fighting, in May 2015, Islamic State fighters captured it by unleashing a barrage of truck and suicide bombs that overwhelmed government forces.

They raised their flag above Anbar Operations Command center, the former provincial police and military headquarters that was once a U.S. military base, then proceeded to largely level the complex with explosives. Over the following days, they methodically destroyed government buildings.

Terrorists took over homes, converting living rooms into command centers and bedrooms into barracks. They dug tunnels under the streets to evade air strikes, shut down schools, looted and destroyed the homes of people associated with the local government. They set up a headquarters in the campus of Anbar University, on the city’s western edge.

Over the course of the eight-month campaign to push IS out of Ramadi, coalition aircraft dropped more than 600 bombs on the city. The strikes targeted IS fighters, but also destroyed bridges, buildings and roads, the Pentagon has acknowledged. Government forces seized districts on the outskirts and in December launched their final assault.

As Iraqi ground forces moved into Ramadi, IS methodically laid explosives and blew up swaths of the city’s infrastructure. The electrical grid was almost completely destroyed and the city’s water network was also heavily damaged. The jihadis bombed the city’s remaining bridges and two dams. Though most of the population had already left, IS fighters tightened checkpoints along main roads out of the city to prevent civilians from fleeing. They later used families as human shields as they made their escape.

“ISIS made a concerted effort to ensure the city would be unlivable,” said Patrick Martin, an Iraq researcher at the Institute for the Study of War.

As his convoy of troops approached Ramadi, Maj. Hussein said he watched IS fighters set fires in Anbar University to destroy sensitive documents. The fires burned for days.

The complex is now largely destroyed. A gymnasium used by IS to store documents has been torched. Charred sports equipment — a boxing glove, cleats, pieces of a track suit — line the hallways. Iraqi artillery fire punched thick holes into the university’s library. Only the two main reading rooms are safe to visit; the rest of the four-story building is believed to be booby-trapped.

Trying to uproot dug-in fighters, coalition aircraft and Iraqi artillery unleashed devastation. Haji Ziad Square, for example, is a strategic intersection with lines of sight down major thoroughfares by which troops had to approach. So IS fighters deployed heavily there. The new multistory Haji Ziad Restaurant made a prime sniper post. Iraqi troops called in intense coalition strikes on the square to help clear the terrorists.

Tens of thousands of Ramadi’s residents live in camps or with extended family in Baghdad. Hundreds of thousands are in other nearby villages. Thousands more live in a small resort town on Habbaniyah Lake south of Ramadi that has become a sprawling camp.

According to the United Nations’ satellite mapping agency, UNITAR, an estimated 5,700 buildings out of the city’s total of around 55,000 were seriously damaged or destroyed.

With an eye to reducing destruction in the fight against IS moving forward, coalition planes are using fewer airstrikes and smaller, more targeted munitions.

In Hit — a small town to the west of Ramadi retaken from IS in April — Iraqi commanders complained that it was becoming increasingly difficult to get requests for airstrikes cleared by coalition forces. Brig. Gen. Sami Khathan al-Aradi said progress in Hit was slower because of the reduced airstrikes.

“Our allies have their own standards, their own regulations,” al-Aradi explained, implying that Iraqi planes would have used airstrikes more liberally.

Mosul is roughly two-thirds larger in area than Ramadi, and some 1 million to 1.5 million residents are still in the city — a far higher number than those who were in Ramadi as Iraqi forces fought to regain it — putting large numbers in harm’s way when an assault is launched.

The destruction of Mosul on the same scale as Ramadi would result not just in billions of dollars of damage. It also would risk further alienating the Sunni minority population. Long oppressed under the Shiite-led central government in Baghdad, some Sunnis originally welcomed IS fighters into Mosul and parts of Anbar province. But after months of increasingly brutal IS rule, the group’s support among Sunnis appears to have eroded.