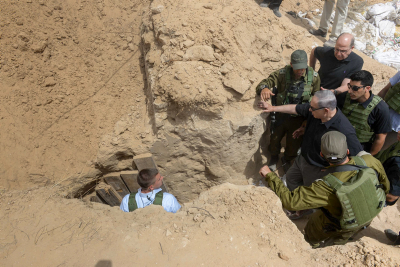 Gaza Arab terrorists on Wednesday morning lobbed a mortar shell at an IDF patrol that was operating next to the Gaza border fence. B’chasdei Shamayim, no Israeli injuries were reported. A structure used as a lookout tower on the Israeli side of the border was damaged in the incident. Soldiers shot back in the direction where the shell was fired from.

The incident was similar to one that occurred on Tuesday – just a short time after Prime Minister Binyamin Netanyahu and Defense Minister Moshe Yaalon visited IDF positions on the Gaza border, and declared that the IDF had effectively prevented an uptick in terrorism emanating from Gaza. On the tour, Netanyahu and Yaalon were shown the entrance of the terror tunnel the IDF discovered last month. The tunnel had been neutralized by the IDF.

Overnight Tuesday, security officials said they arrested 18 wanted security suspects in Yehudah and Shomron. The suspects were wanted for participating in rioting and throwing stones and firebombs that endangered Israeli civilians and IDF soldiers. Several of the suspects were also charged with belonging to Hamas. All were being questioned on their activities by security forces.

In a raid on a house in Chevron, also on Tuesday night, soldiers found and seized numerous weapons, including automatic weapons. The residents of the house were arrested.