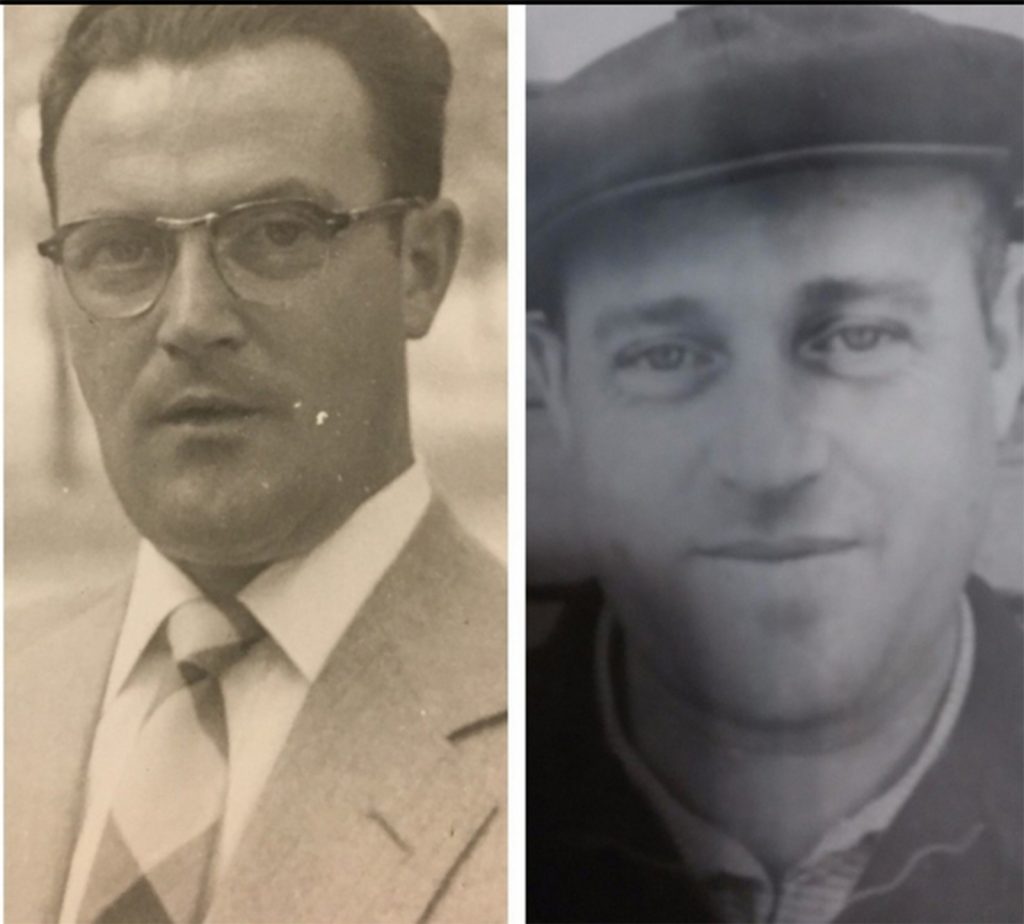 The five women crowded together around the kitchen table in New Jersey, their eyes fixed on a laptop screen. It was 7 a.m., and none of them had slept well the night before; they were too anxious and excited for this moment. Jess Katz logged into Skype as her mother and three sisters watched.

A face flickered into view: their cousin, the son of a long-missing uncle, the family they thought they had lost forever in the Holocaust.

“What do you say to someone you’ve been searching for your whole life?” Katz says.

More than 70 years had passed since Katz’s grandfather, Abram Belz, first tried to find his younger brother, Chaim. Abram last saw Chaim in 1939, the year their family was relocated along with thousands of other Polish Jews to the Piotrków Trybunalski ghetto at the start of World War II.

The brothers died without seeing each other again, but on April 20 their families joyfully reunited.

The young men were separated soon after the family was forced into the ghetto following the Nazi invasion of Poland. Abram’s mother had begged her two sons to escape and save themselves, Katz says.

“My grandfather, because he was the oldest son, felt an obligation to stay,” she says. “But it was important to their mom that Chaim try to escape.”

Abram described what happened next in a 1990 testimonial for Steven Spielberg’s USC Shoah Foundation project:

“Less than a year after we moved into the ghetto, my grandfather dropped dead in the house. Two weeks later, my 24-year-old sister died of tuberculosis. My uncle who was 26 years old was shot, his wife and baby were sent to Treblinka where they were gassed to death by the Nazis. The rest of my family was exterminated. My parents were sent to Treblinka and were killed in the gas chambers.”

Of more than 60 relatives, Abram and one of his cousins were the lone survivors of the concentration camps. Abram was liberated from the Mauthausen-Gusen concentration camp in 1945, and eventually resettled in Brooklyn, NY.

He never stopped looking for Chaim. When Abram moved to the U.S. after the war, he wrote to the Polish government and sought the help of nonprofits that worked to connect survivors to their families. In the 1980’s, his daughter – Katz’s mother, Michelle Belz Katz – penned letters to the Red Cross, Yad Vashem (Israel’s Holocaust Remembrance Center), and Russian and Polish officials, to no avail.

“I can’t find anything about my brother who escaped to Russia,” Abram wrote in the final lines of in his 1990 testimonial. “My daughter wrote all kinds of letters to try to find him. We can’t find him.”

Last month, Katz – a tech-savvy 25-year-old who works for a software company in New York City and has blogged about her family’s Jewish roots – had extra time on her hands as she recovered from minor surgery at home. She decided to take up the search.

After decades of tedious research and letter-writing, it took Katz two weeks to find Chaim’s son.

It was a success born of an improbable alchemy: the serendipity of social media, the generosity of helpful strangers, and access to technology that allowed distant relatives to bridge thousands of miles, a 14-hour time difference and a language barrier.

With the help of a Jewish heritage website,  Katz contacted a genealogist who quickly tracked down Russian military documents with Chaim’s name and army unit, dated 1942. Katz shared the documents in a Jewish social-media group, where she was directed to another Russian forum, where – with the help of online translation – Katz’s post caught the attention of an Israeli woman who matched Chaim’s last name to a man on a Russian social-networking site. That man, it turned out, was Evgeny Belzhitsky.

Katz created an account on a social media site and sent Belzhitsky a message. He responded right away: “He said ‘I don’t have the words to explain my emotions right now, but I want to send you a picture of my father. Do you see any resemblance?’ ” Katz says. “My sisters and my mom are sitting on the bed together, and my mom just screams, because he looks just like my grandfather.”

But her family wanted to be certain, so they asked Belzhitsky what his father’s birth date was. He answered with the correct date: Nov. 17, 1918.

“We were shaking, we were crying, we couldn’t believe it,” Katz says. The next morning, she says, the family met for the first time over Skype, and spent two hours talking about their families and their shared history, about Abram and Chaim.

On different continents, the lives of the two brothers followed remarkably similar paths: both became successful tailors after the war. Both married women eight years younger. Both were gentle, doting fathers. And each had searched for the other, writing letter after letter, hoping his sibling had somehow survived.

Neither lived to see last month’s reunion. Abram died five years ago at age 95; Chaim succumbed to a brain tumor at 51. Belzhitsky showed his American relatives a photograph of his father’s grave.

It was so much to process, Katz says – family lost and found, all at once. Her mother was especially moved by the bittersweet reconnection.

Since their first Skype session, the newfound relatives have been in touch daily. They send messages to each other over social media, sharing stories and photos. They are trying to make up for so much lost time, Katz says, and they hope to arrange a visit as soon as they can.

And they want other people, those who are still hoping and hunting for lost relatives, to know that a miracle is always possible.

“Since I shared the post, I’ve gotten a lot of messages from families who are also still searching and asking how I did it,” Katz says. “We want to show that there are these different tools that technology can offer now – these [social media] groups, online translation – and that can really help in finding relatives. We want to give hope to families who are still searching for loved ones.”

Katz says she believes her grandfather and great-uncle “are beaming down with happiness now.”