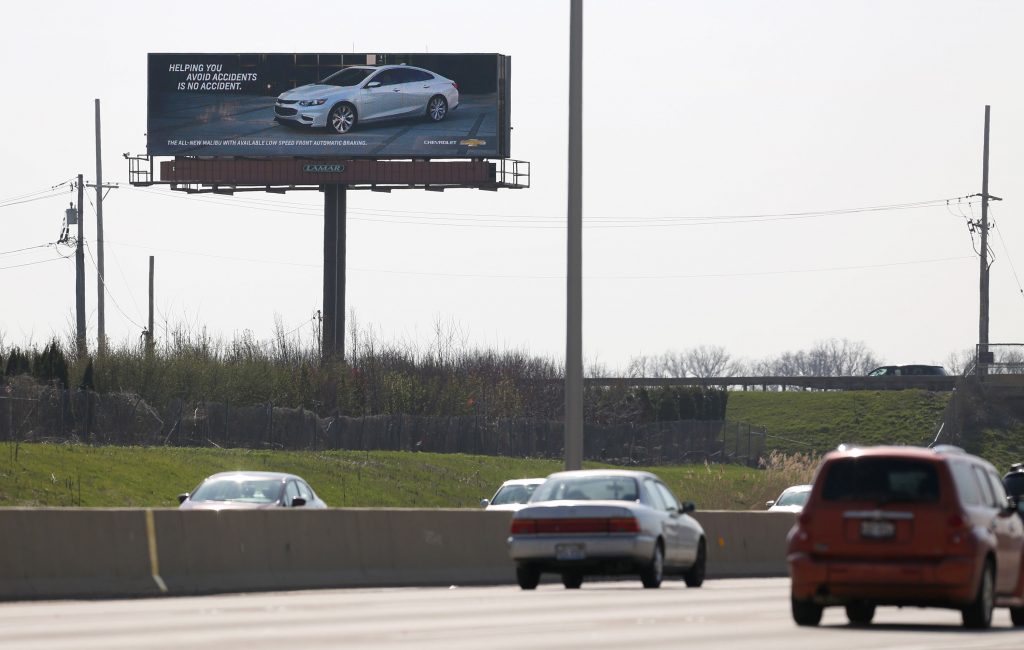 Drivers along a busy Chicago-area tollway may have recently noticed a large digital billboard that seems to be talking directly to them.

Cruising along in an Altima? The message might be “More Safety Features Than Your Nissan Altima.” Driving a Ford Fusion or Toyota Camry? You might see a miles-per-gallon comparison between the Malibu and your car. The ads last just long enough for approaching drivers of those vehicles to know they got singled out and served by a billboard.

Consumers used to receiving personalized ads on their smartphones may be surprised to see one on a 672-square-foot highway billboard. But data-based technology is finding its way into digital outdoor displays of all types, enabling advertisers to track, reach and sell you stuff — even at 55 mph.

“This is just the tipping point of the disruption in out-of-home,” said Helma Larkin, CEO of Posterscope, an out-of-home communications agency that designed the Malibu campaign with billboard company Lamar Advertising. “The technology coming down the pike is fascinating around what we could potentially do to bring digital concepts into the physical world.”

There are about 370,000 billboards in the U.S., most of which still deliver a large static message to motorists the old-fashioned way — with posters or paint. Digital billboards — giant screens that generally rotate in new messages every 8 seconds or so — number about 6,400 nationwide, and are gaining traction.

“There’s a good growth trend that we’ve seen over the past of the digital roadside inventory,” said Stephen Freitas, chief marketing officer of the outdoor advertising trade association. “Several hundred new locations are built every year.”

Serving the same sort of targeted ads that consumers receive on their smartphones to a giant billboard, however, represents a leap in the digital evolution of outdoor advertising, and a bold new canvas that is sure to grab attention.

“Most people think it’s really cool,” Larkin said. “Consumers are much more attracted to an ad and are much more prone to take notice of it when it relates to them and the environment that they’re in as opposed to a blanket statement.”

Others fear targeted billboard advertising represents yet another digital assault on privacy. And unlike mobile apps, consumers can’t opt out of the billboard’s prying eyes.

“It’s the beginning of a digitally driven, intelligent, outdoor spying apparatus that captures all your details in order to advertise and market to you,” said Jeffrey Chester, executive director of the Center for Digital Democracy, a Washington-based nonprofit focused on consumer protection and privacy issues. “It’s a mistake to think it’s just an outdoor ad.”

Billboards are already being used to track consumers. Clear Channel Outdoor Americas, for example, is using aggregated mobile data to identify drivers passing its Chicago billboards and their shopping habits.

Larkin said the Malibu billboard camera is only capturing the grilles of the autos to identify the competitive brands, yielding less data than a typical online session.

“They don’t take pictures of peoples’ faces — it’s blurred out by the technology, the license plate is blurred,” Larkin said. “We are picking up the make and model of the cars.”

For Chester, promises of aggregated anonymity fall on deaf ears. He is convinced that the Malibu billboard is already learning more about the passing drivers than they realize.

“You might be able to ignore a billboard, but this is a billboard that is going to know you,” Chester said.