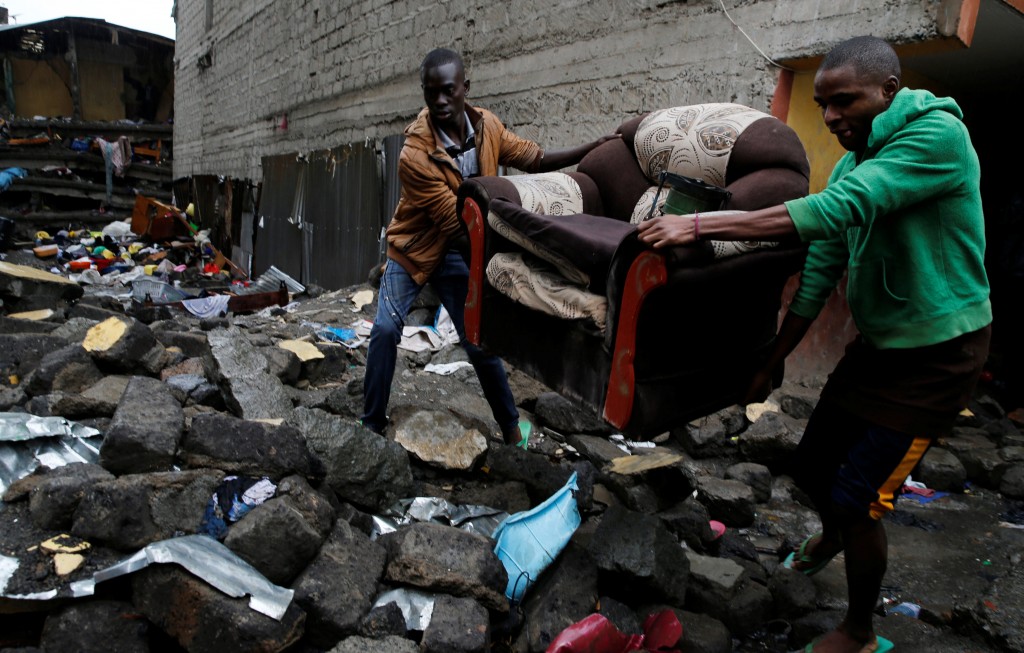 Rescue workers pulled a six-month-old baby girl out of the rubble of a building in Kenya’s capital on Tuesday and reunited her with her father, more than three days after it collapsed following days of heavy rain.

At least 21 people have been confirmed dead so far, following the collapse of the six-story residential building in Nairobi’s poor Huruma district on Friday night. Police are questioning the owners after President Uhuru Kenyatta ordered them detained.

“The child, who had been buried for about 80 hours, was found in a bucket wrapped in a blanket. She appeared dehydrated, and with no visible physical injuries,” the Kenya Red Cross said in a statement.

The baby was identified by her father as Dealeryn Saisi Wasike,  and is making a rapid recovery in the hospital. A Red Cross official said the fate of her mother was still not clear. The baby had previously been estimated to be about a year old.

The collapse of the building was the latest such disaster in a rapidly expanding African city that is struggling to build homes fast enough. Like many other cities in Africa, the population of Nairobi has climbed dramatically in recent years. The Kenyan capital had almost 3.5 million people in 2011, about one third more than a decade earlier, according to U.N. figures.

Many Kenyans who come to the city in search of work end up in one of several slums, such as Kibera, made up of makeshift homes of wood and corrugated iron sheets.

Others live in slightly better off but still poor districts, like Huruma, where concrete buildings have risen rapidly amid potholed roads and unreliable power supplies. Heavy rains have caused other collapses in Nairobi but without such high death tolls.

The government has struggled to provide basic infrastructure and bureaucratic processes to ensure planning rules are met. After visiting the site on Saturday, Kenya’s president ordered that other buildings be surveyed to ensure they are safe. The Interior Ministry said the Huruma building had already been earmarked for demolition since it was built close to a river, but the order had not been carried out by local officials. The Ministry urged developers to adhere to safety standards.

Rescue workers had said on Monday that the chances of finding more survivors was unlikely. About 136 people have already been saved from the wreck. Dozens of other people are still listed as missing, Red Cross Spokeswoman Arnolda Shiundu said, adding it was not clear how many of those had escaped but had not yet been traced.

Similar disasters have afflicted other overcrowded urban areas in Africa. In 2014, a church in Lagos, one of Africa’s biggest cities, collapsed killing 115 people. A Nigerian coroner blamed poor construction for that disaster.

Elsewhere, poor and illegal construction has also often been blamed for the crumbling of apartment blocks in Egypt, where almost all Egyptians are crammed into the crowded Nile Valley and buildings are often extended with extra floors piled on top.