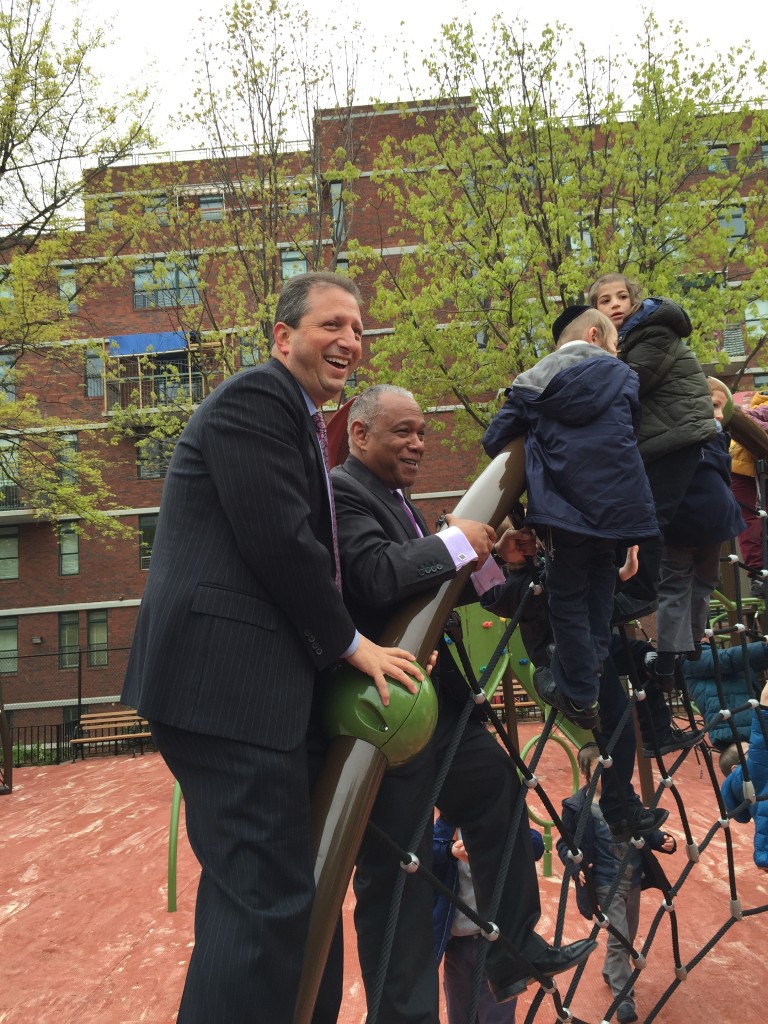 Members of the Brooklyn community on Monday participated in a ribbon-cutting ceremony at the Dome Playground in Boro Park, celebrating what community members described as a much-needed renovation.

The event commemorated the completion of the first phase of $2,750,000 worth of renovations to the park, funded by allocations of $950,000 from Brooklyn Borough President Eric Adams and $1.8 million from New York City Councilmember Brad Lander, whose district includes 38th Street and Dahill Road, where the park is located, on the border of Boro Park and Kensington.

The first phase of renovation covered the majority of the park, including the children’s’ playground, benches and grassy area, which will feature new landscaping, trees and a sprinkler system for hot summer days.

The next phase, slated to begin within a year, will renovate the basketball and handball courts and add adult fitness equipment.

“The renovated portion of the park previously had a very small playground area, and a large area with just grass and two big boulders sticking up,” Zev Rubinstein, a father of five who lives in an apartment building next to the park, told Hamodia. “The boulders did absolutely nothing for the park. There were very few trees and no shade; the grass was muddy, ugly and uncared for – it was dilapidated, an eyesore and a lot of wasted space.”

“The new park is beautiful,” continued Rubinstein. “Lots of the needless open space was turned into new playground space, with gorgeous new equipment. And there are separate sections for toddlers and older children, with equipment appropriate to each age. My kids can’t wait to try it out when they get home from yeshivah today.”

The ribbon-cutting ceremony was attended by neighbors, community members, and a number of elected officials and community leaders.

Monday’s ceremony marked the culmination of two years of discussions at community meetings, and discussions between residents, the office of Brad Lander, and Community Board 12, led by Yidel Perlstein and Barry Spitzer. The officials sought the community’s input in the specifications of the renovation. It was an “extraordinary partnership – it’s been a long road,” recalled Councilman Lander.

Though neighbors interviewed by Hamodia were generally enthusiastic about the renovated park, several also expressed concern about security and privacy.

“Late at night, after dark, a bad element sometimes congregates in the park,” Jeremy Fried, another resident, told Hamodia. “Furthermore, we asked for large fences and tall shrubs to surround the park, for privacy between the park and the yards that run along it, and to absorb the park noise – this was brought up at several meetings. But as of now, the new park – as lovely as it looks – is surrounded by only a fence.”

Although Monday was a somewhat cool day, local children were eager to try out the new playground. Early in the afternoon, even before the formal ribbon-cutting ceremony, young boys from a nearby cheder were already jumping on, over, under and through the new equipment ­ – and were later joined on a ladder wall by the Councilman and Parks Commissioner.

“Dome Playground is reopening as a neighborhood treasure for all ages,” said Councilman Lander.

“That’s what this is all about,” said Commisioner Silver, pointing to the smiling young faces. “Bringing joy and creating memories for our children.”