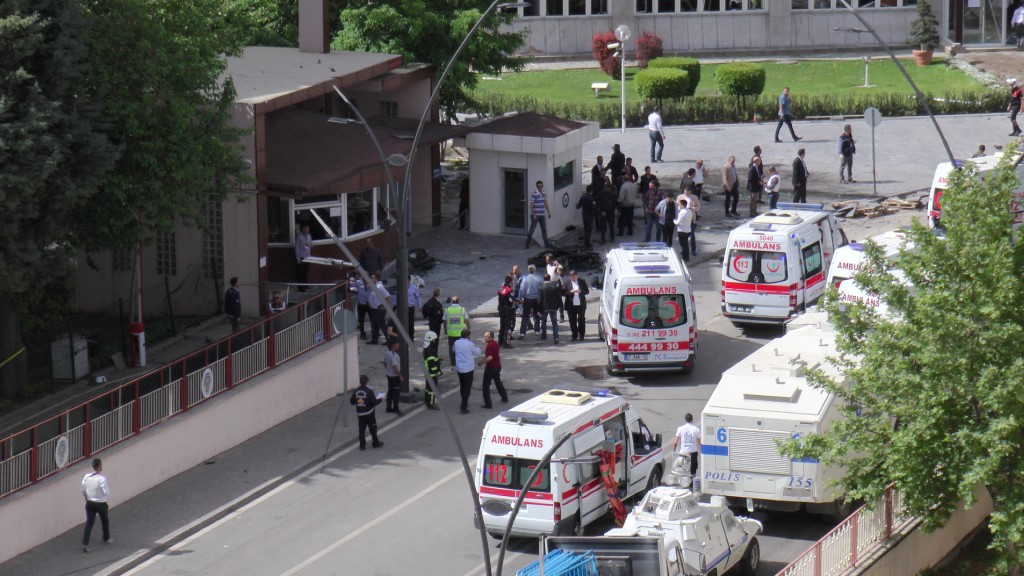 Two police officers were killed and 23 people wounded in a car bomb attack on police headquarters in the southeastern Turkish city of Gaziantep, the provincial governor and police sources said, in one of two attacks on security forces on Sunday.

There was no immediate claim of responsibility; but Turkey has suffered attacks recently both from Kurdish terrorists and terrorists of the Islamic State group, raising uncertainty at home and among NATO allies about spillover of conflict from neighboring Syria.

A bomb-laden vehicle was detonated outside the gates of police headquarters on a street housing several other provincial government buildings whose windows were shattered.

Footage from broadcaster CNN Turk showed forensics experts collecting pieces of the wrecked vehicle as well as rubble strewn by the blast felt across the city.

Police cordoned off the scene and police carrying rifles patrolled the area. Gunfire was heard at the time of the explosion and a second car was reported to have been driven away from the scene, CNN Turk’s correspondent said.

Nineteen police officers and four civilians were wounded in the attack, a statement from Gaziantep governor Ali Yerlikaya’s office said. One police officer died at the scene and a second in hospital, a security source said.

Turkey is facing security threats on several fronts. As part of a U.S.-led coalition, it is fighting the Islamic State terror group in neighboring Syria and Iraq and battling Kurdish PKK terrorists in its southeast, where a 2-1/2-year ceasefire collapsed last July, triggering the worst violence since the 1990s.

The province of Gaziantep, bordering Islamic State-held Syrian territory, is home to a large Syrian refugee population and there have been multiple police raids on suspected Islamic State terrorists there over the past months.

Also on Sunday, several hundred miles eastwards along the same border, in the town of Nusaybin, three Turkish soldiers were killed and 14 others wounded in an armed attack by Kurdish terrorists during a military operation, an army statement said.

A wave of suicide bombings this year, including two in its largest city Istanbul, have been blamed on Islamic State, and two in the capital Ankara were claimed by a Kurdish terror group.

Last week a female suicide bomber blew herself up next to a mosque on a busy street in Turkey’s fourth largest city of Bursa, wounding eight people.