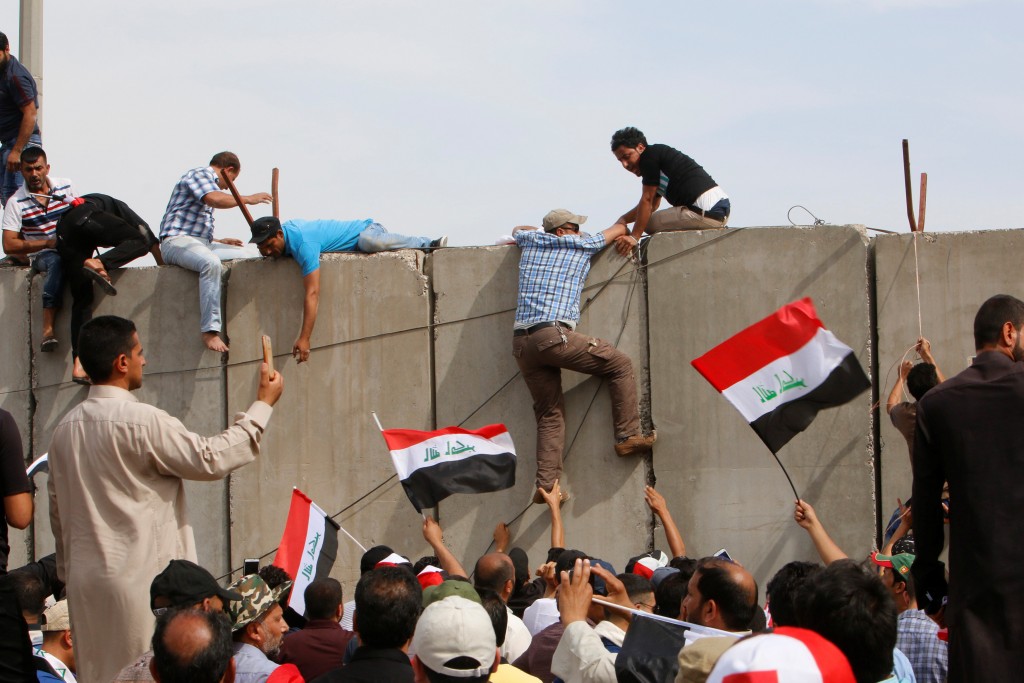 Protesters stormed Iraq’s parliament Saturday in a dramatic culmination of months of demonstrations, casting uncertainty over the tenure of the country’s premier and the foundations of the political system laid in place after the 2003 U.S.-led invasion.

Security forces declared a state of emergency in the Iraqi capital after demonstrators climbed over blast walls and broke through cordons to enter Baghdad’s fortified Green Zone, also home to ministries and the U.S. embassy. Many were followers of Iraq’s powerful Shiite cleric Moqtada al-Sadr, who has been urging his supporters onto the streets.

Lawmakers fled the building in panic, with some berated and hit as they left. Others were trapped in the basement for hours, too afraid to face the crowds, who complain that the country’s political class is racked by corruption.

It was a day of high drama for a country that is no stranger to revolution and that has seen all its leaders overthrown from the time the state was established in 1921 until the American invasion toppled Saddam Hussein in 2003. At issue now is the quota system introduced when the U.S.-led coalition put together Iraq’s first post-invasion government, which determines Iraq’s political positions according to sect and ethnicity.

The turmoil threatened to unseat the already embattled prime minister, Haider al-Abadi, with whom the United States has partnered in the fight against Islamic State terrorists in Iraq but whose efforts at reform have stumbled. U.S. officials have expressed concern that the unrest could impact the battlefield as Iraq also struggles with an extreme budget crisis caused by a plunge in oil prices.

“Today the people announced their revolution,” said Sadr, who led a violent resistance against American troops during the Iraq War, in a statement Saturday night. “History will record the birth of a new Iraq, from the ashes of corruption and the corrupt.”

Entering the parliament building, which, like the rest of the Green Zone, has been off-limits to the public for the past 13 years, protesters reacted with jubilation. To many, the area has become a symbol of corruption, the place where Iraq’s political elite live walled off from the rest of the country.

They crammed the building’s main hall, chanting and waving flags.

“I was thrilled to be in that room. It was like being in a place you only see [on tv],” said 26-year-old Abdullah al-Zaidi. “When I entered I was looking at chairs, and I wanted to break them, because the politicians are killing us and stealing from us from these chairs.”

He said he didn’t, as organizers urged protesters to remain peaceful. However, tv footage showed that some others did.

As evening fell, Zaidi and thousands of other protesters had moved their sit-in to a parade ground near the Hands of Victory monument — an arch shaped from crossed swords and one of the capital’s most famous landmarks — putting them less than a mile from the U.S. Embassy compound.

The embassy denied that it had begun evacuating staff or had provided safe haven for Iraqi politicians. Organizers urged protesters not to attack embassies or other properties in the area.

Still, members of parliament, many of whom live in the Green Zone, went into hiding, and some left the country.

Shwan Dawoodi, a Kurdish lawmaker, said they were “scared for their lives.”

“What’s happening in the streets is terrifying,” he said by phone. He said he was attacked as he left parliament.

Ammar Toma, a politician with the Shiite Fadhila Party, was also accosted as he tried to leave. “Hit him, hit him!” one protester shouted. Five Kurdish lawmakers were rescued by Kurdish peshmerga forces after locking themselves in a room in the building for safety.

One video posted online showed protesters riding around on a military vehicle.

Many politicians said the day’s events marked a turning point.

“This is an end to the political system put in place after 2003,” said Dawoodi, speaking by phone after he fled the parliament building. “A big part of the blame for this is on America, which left Iraq without solving this crisis it created.”

He blamed the prime minister for putting lawmakers’ lives at risk, after local news reports cited Abadi as saying he had ordered that protesters be allowed into the Green Zone. Abadi’s office issued a statement denying that he had done so.

A soldier at one gate into the Green Zone recounted an exchange between security forces trying to hold back protesters near parliament. “There were orders to stop them and to not allow them to enter, but the soldiers responded that they couldn’t,” he said, speaking on the condition of anonymity because he was not authorized to talk to the media.

At another gate, security forces pushed back demonstrators with tear gas as the sound of gunfire broke out, video from the scene showed.

“That’s it for Abadi,” said parliamentarian Hisham al-Suhail, who said dozens of lawmakers were exchanging messages saying the prime minister is not fit to run the country. “What’s happened has ruined everything we’ve built over the last 13 years. The Green Zone represents the whole government of Iraq.”

The speaker of parliament, Salim al-Jubouri, who a group of rebel parliamentarians attempted to oust in a vote last week, said the attack on the legislature was an “attack on the prestige of the state,” with its members “servants” of the Iraqi people.

But protesters say that Iraqi politicians are corrupt and stealing the county’s oil wealth.

Street protests began last summer, when tens of thousands demonstrated against corruption and a lack of services. They were reinvigorated when Sadr put his weight behind them earlier this year, calling for Iraq’s government to be replaced by technocrats.

Under immense pressure, Abadi has tried to reshuffle his cabinet and meet the demonstrators’ demands.

But he has been hampered by a deeply divided parliament, and sessions have descended into chaos as lawmakers have thrown water bottles and punches at one another.

Protesters outside have watched the school-yard antics with growing impatience.

Earlier in the day, not enough lawmakers had turned up to officially convene a session in which Abadi was due to present names for a cabinet reshuffle.

Sadr held a news conference from the southern city of Najaf.

“They are against reform. They hope to behead the will of the Iraqi people,” he said of the country’s politicians. “I’m with the people, no matter what they decide. I’m standing and waiting for a major uprising of the Iraqi people.”

After the breach, security forces announced that they had closed all roads into the capital, but they did not go as far as to reinstate a curfew.

“We are in the highest degree of readiness,” said Col. Ibrahim al-Baydani, a spokesman for the military, noting that Baghdad was already on high alert because of a Shiite pilgrimage. The Islamic State attempted to bomb pilgrims on the route Saturday morning. Unable to get near the pilgrims, the suicide bomber detonated a truck bomb among crowds at a busy sheep market instead, an official said.

“The enemy might try to take advantage of the exceptional situation of the country to carry out attacks inside the capital,” he said, adding that commanders on the street had been given the authority to set up checkpoints or close roads as they see fit, without permission from central command.

Concerns that Iraq’s political crisis could hamper its battle against the Islamic State have prompted a flurry of high-level visits by American politicians in recent weeks, most recently by Vice President Biden on Thursday.

“Our focus remains the defeat of ISIL,” Col. Steve Warren, a spokesman for the U.S. military, tweeted on Saturday. “Our operations continue and we have not been interrupted.”

Abadi called for protesters to return to areas of the capital that have been designated for demonstrations. The security situation, he said, was “under control.”

But as night fell, young Iraqis used a social-media “check in” feature to mark their locations at landmarks in the Green Zone, in what was for some of them their first visit to the heart of the capital.