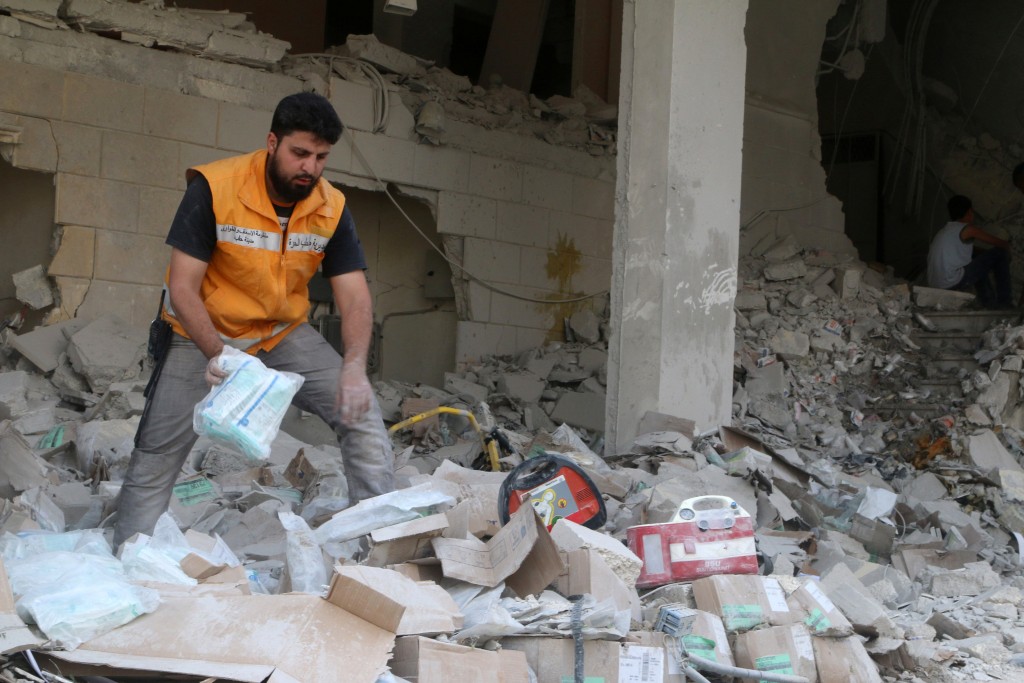 Nearly 30 air strikes hit rebel-held areas of Aleppo on Saturday as a temporary “calm” declared by Syria’s military took effect around Damascus and in the northwest.

It was the ninth day of deadly bombardments in Aleppo, which has borne the brunt of increased fighting that has all but destroyed a February ceasefire and killed nearly 250 people in the northern city since April 22, a monitoring group said.

It also contributed to the break up of peace talks in Geneva, which the main opposition walked out of last week.

The Syrian army announced a “regime of calm,” or lull in fighting, late on Friday, which Damascus said was designed to salvage the wider ceasefire.

A number of rebel groups appeared to reject the “regime of calm,” however. “We won’t accept any kind of… regional ceasefires,” a statement from a number of groups including Jaysh al-Islam, which controls areas east of Damascus, said.

It said the main armed opposition as a whole reserved the right to respond to attacks on rebel factions in any part of the country, and criticized the United States for not doing enough to stop government bombardments.

The lull in fighting around the capital and parts of northwest coastal province Latakia, announced by the army, appeared to hold through most of Saturday but the bombing continued in Aleppo which was excluded from the plan.

Anas Al Abde, president of the Turkey-based opposition Syrian National Coalition, accused the government of violating the February truce “daily.” The opposition was ready to reinstate the wider truce, but reserved the right to respond with force to attacks, he said.

All sides have accused each other of truce violations.

The Syrian army did not explain in any detail what military or non-military action the “regime of calm” would entail. It said it would last for 24 hours in the capital Damascus and its suburb Eastern Ghouta and for 72 hours in rural areas around the northern city of Latakia.

At least five people were killed in Aleppo early on Saturday in air strikes believed to have been carried out by Syrian government warplanes, the Syrian Observatory for Human Rights said.

Aleppo, Syria’s largest city before the war, has been divided for years between rebel and government-held zones. Full control would be a huge prize for President Bashar al-Assad.

Of the 250 casualties since April 22, 140 were killed in bombardments by government-aligned forces and 96 by rebel shelling. Forty children were among the dead, according to the Observatory’s tally.

State news agency SANA said at least one person had been killed by rebel shelling on government-held neighborhoods.

Latakia and Ghouta were quiet with only some lower-level violence between rival rebel groups outside Damascus, Abdulrahman said.

A resident of Western Ghouta, which is under government siege, said shelling appeared to have ceased around the capital in the hours after the start of the lull at 1 a.m.

“There has been no military activity and no sound of bombardments in nearby areas, no sound of shelling or of warplanes,” Maher Abu Jaafar told Reuters.

“It’s the opposite of last night, when there was a lot of bombing and the sounds of rockets and shells.”

Syrian helicopters later in the day dropped barrel bombs southwest of Damascus but outside the area where the lull in fighting was meant to take place, the Observatory said.

The United Nations has called on Moscow and Washington to help restore the ceasefire to prevent the complete collapse of talks aimed at ending the five-year conflict in which more than 250,000 people have been killed and millions displaced.

Agencies have continued to deliver aid in the west of the country, but say that access is not regular enough and that many Syrians in need still cannot be reached.

The International Committee for the Red Cross said aid had begun to enter the towns of Zabadani and Madaya, where there were reports of starvation earlier this year due to a siege by government forces and their allies.

Trucks simultaneously entered al-Foua and Kefraya in the northwest province of Idlib, which are surrounded by terrorists.