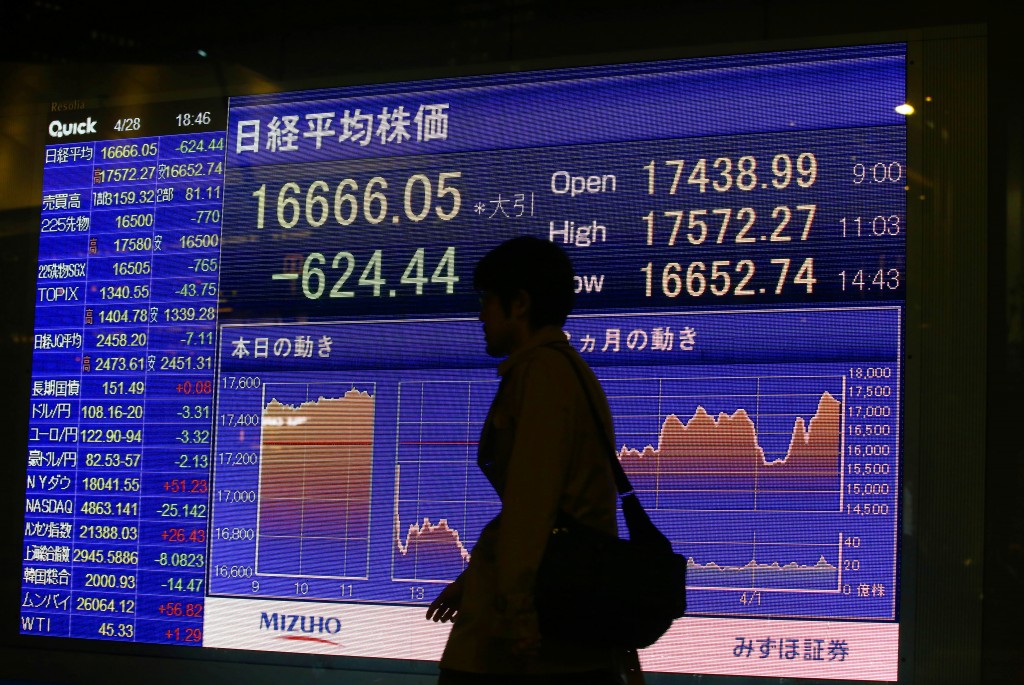 Japan’s central bank stunned financial markets Thursday with a decision not to splash out still more monetary stimulus for the ailing economy – apart from zero-interest loans for an earthquake zone.

Share prices tumbled after the Bank of Japan ended its policy meeting without stepping up asset purchases or cutting interest rates further into negative territory. The Nikkei 225 stock index gave up early gains to close down 3.6 percent. The Japanese yen surged by nearly 3 percent.

“The BOJ never fails to surprise us. It is probable that the central bank is temporarily running out of tools to stimulate the economy, or they need more time to observe and assess the impact of negative interest rates,” said Margaret Yang of CMC Markets.

But while markets were disappointed, analysts said the Bank of Japan could be biding its time out of both domestic and diplomatic considerations.

Japan is the host country for the Group of Seven wealthy nations’ summit, due to take place May 26-27. Stimulus that would help weaken the Japanese yen could irk some trading partners.

Later moves by the BOJ could benefit from a boost to government spending ahead of an upper house parliamentary election in July.

For now, the central bank is biding its time, despite having downgraded its outlook for the economy and pushed back its timeframe for achieving a 2 percent inflation target.

The BOJ’s biggest move this year has been to adopt a “negative interest rate” policy, imposing a 0.1 percent fee on some money it holds for commercial banks, beyond required reserves.

That policy, imposed in February, so far appears not to be spurring any major increases in bank lending.

The earthquakes that struck two weeks ago in Kyushu, southwestern Japan, killing 49 people, are among many factors clouding the economic outlook, due to disruptions to tourism, logistics and manufacturing.

The Bank of Japan said Thursday that it would provide 300 billion yen ($2.75 billion) in zero-interest rate loans to financial institutions in the disaster-affected areas. It also expanded the amount of reserves that can be held at zero percent interest at the BOJ.

But it left other aspects of its asset purchases and interest rate policies intact.

The BOJ announcement followed news that factory output rose 3.6 percent from a year earlier in March while core inflation and consumer spending fell, underscoring a lack of confidence among households whose buying power remains the key to sustained growth.

BOJ Gov. Haruhiko Kuroda has made it his mission to vanquish deflation, which tends to stifle growth by discouraging companies from investing in new plants and equipment and hiring more workers. He has said he will do whatever it takes to attain an inflation rate of about 2 percent, which the government’s planners say is crucial for spurring growth.

But in March, Japan teetered back into deflation, with core inflation excluding volatile food prices at minus-0.3 percent.

A recent strengthening of the Japanese yen and a relapse in crude-oil prices have slowed progress toward the BOJ’s inflation goal: the price index excluding energy prices rose 0.7 percent on an annual basis.

Japan’s jobless rate shrank to 3.2 percent in March from 3.3 percent the month before, while household incomes edged up 0.3 percent from a year earlier.

Wage hikes are crucial for enticing consumers to spend more, but the limited increases so far have mostly gone to low-paid part-time workers whose budgets are already stretched tight. In March, consumer spending contracted by 5.3 percent.

The central bank’s assessment of the economy cited sluggish exports and housing starts as factors sapping growth. It pointed to increased spending ahead of the Tokyo 2020 Olympics as a potential bright spot.