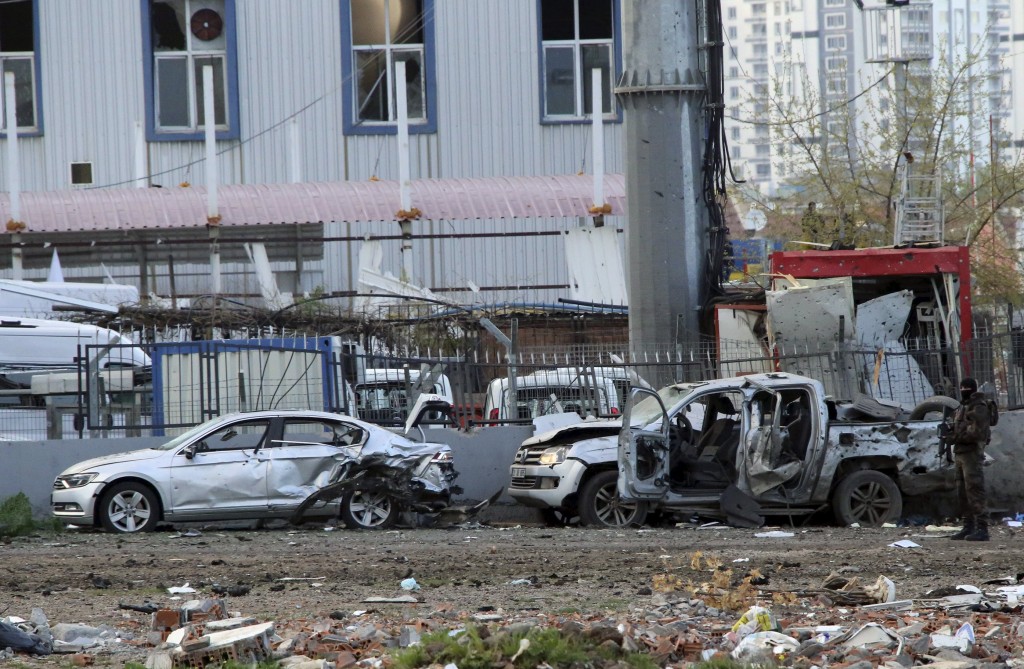 A female suicide bomber wounded eight people when she blew herself up near the main mosque in the northwestern Turkish city of Bursa on Wednesday, officials said, the fifth suicide bombing in a major urban center this year.

Photographs from the scene showed the severed torso of what appeared to be the bomber lying at the side of the mosque. Police ushered dazed passers-by out of surrounding streets as ambulances and forensics teams arrived.

The local governor’s office said the woman was thought to have detonated a device she was wearing at 5:26 pm (1426 GMT) near the western gate of Bursa’s Grand Mosque.

Prime Minister Ahmet Davutoglu said eight people were wounded, reducing the toll from 13 given by the health minister earlier. He did not give a reason for the lower count.

“This was an attack aimed at our nation, our people, our peace. Eight of our citizens were wounded. Thank G-d, no citizen was critically wounded,” Davutoglu told reporters in Ankara in comments broadcast by state TV channel TRT.

“This attack will not give cause for Turkey to retreat in its determined stance in fighting terrorism,” he said, adding security forces were still investigating and it was too soon to name a suspected organization.

“The attack was carried out by a suicide bomber. It is a woman,” a senior government official told Reuters.

Turkey has been hit by a series of suicide bombings this year, including two in its largest city Istanbul blamed on Islamic State, and two in the capital Ankara which were claimed by a Kurdish militant group. It has also faced attacks from far leftist groups, mostly on police and security forces.

The Bursa attack happened a day after the United States warned American citizens in Turkey about credible terrorist threats to tourist areas.

Davutoglu said that tourists visiting Istanbul or Bursa do not face greater risks than those visiting Brussels, in reference to the Islamic State bombings that killed 35 people in March.

Bursa is Turkey’s fourth-largest city, an industrial hub directly south of Istanbul across the Marmara Sea. While not one of the country’s biggest tourist destinations, it draws some foreign visitors with its Ottoman-era architecture.

The mosque is situated in a bustling part of Bursa on a street full of jewelry shops. The explosion came at a busy time, shortly after a funeral and afternoon prayers, broadcaster CNN Turk said.

Many of the wounded had light injuries such as cuts from shattered windows and some have already been discharged from hospital.

Turkey is facing multiple security threats. As part of a U.S.-led coalition, it is fighting Islamic State in neighboring Syria and Iraq. It is also battling Kurdish militants in its southeast, where a 2-1/2-year ceasefire collapsed last July, triggering the worst violence since the 1990s.

A suicide bombing in Istanbul’s main shopping district last month killed three Israelis, two of whom held dual citizenship with the U.S., and one Iranian. A separate attack in the city’s historic heart in January killed 12 German tourists.