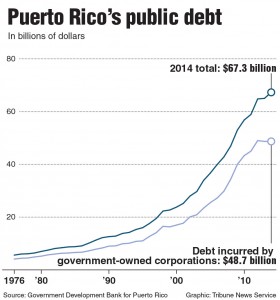 The upper chamber is set to take up the measure passed by the House of Representatives last week, Senate President Eduardo Bhatia said in a statement Monday. The Senate will change the House bill so general obligation and sales tax bonds would still be subject to the debt moratorium law, Bhatia said. Gov. Alejandro Garcia Padilla has said the commonwealth needs the ability to skip payments on both classes of securities.

Assets and revenue of municipalities and local cooperatives would be protected from the moratorium. A deal that would restructure about $9 billion of Puerto Rico Electric Power Authority debt would also be exempt from the moratorium law, Bhatia said.

Garcia Padilla on April 6 signed the moratorium, which allows him to suspend principal and interest payments on island debt, including general obligations. That law has created an obstacle for Prepa, as the electric utility is known, to move forward with its restructuring plans. Puerto Rico is seeking to cut its $70 billion debt load by asking investors to take losses through a voluntary debt exchange. The island faces payments in May and July that the governor has said it cannot pay.