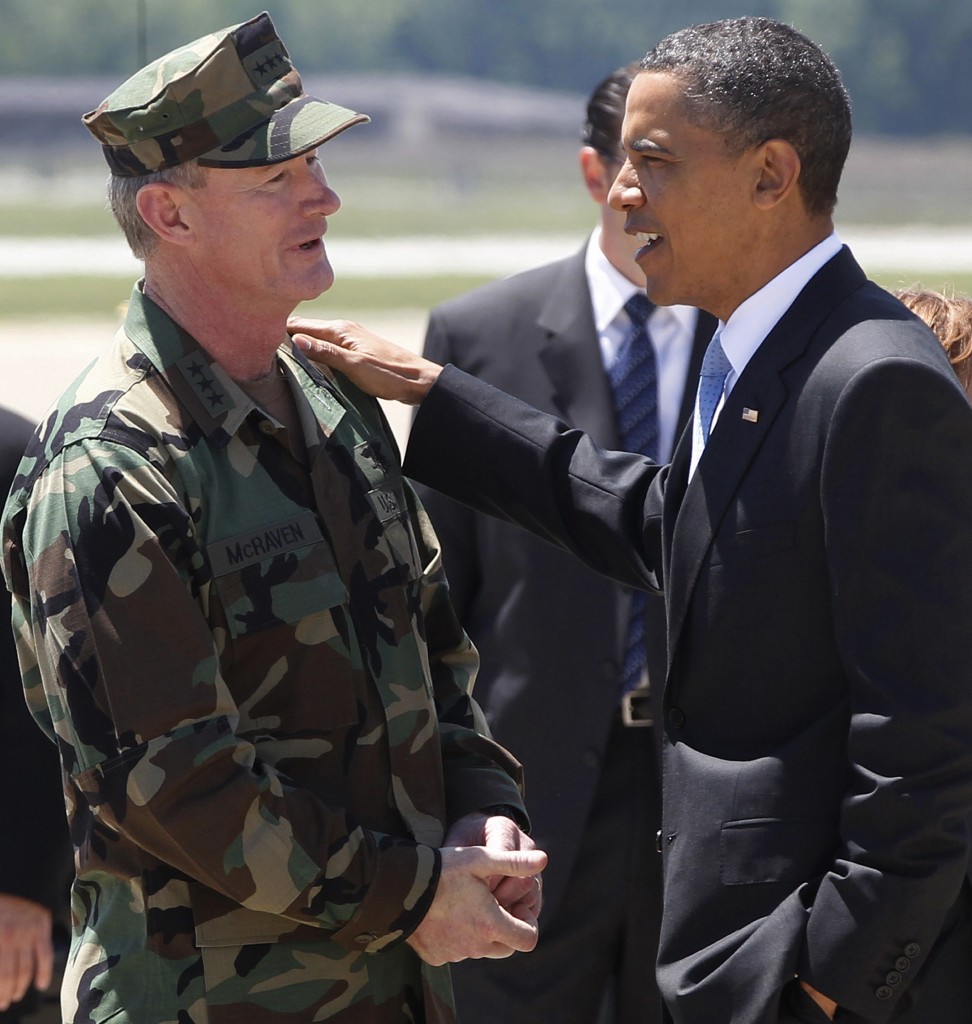 A long-percolating feud between Navy brass and the Senate has erupted into open conflict, with the retired admiral who oversaw the daring 2011 raid that killed Osama bin Laden publicly accusing lawmakers of harboring deep disrespect for military leaders.

In an unusually blunt column published Sunday in the Tampa Tribune, William H. McRaven, a retired four-star admiral, former Navy SEAL and former commander of the secretive Joint Special Operations Command, blasted members of Congress for a “disturbing trend in how politicians abuse and denigrate military leadership, particularly the officer corps, to advance their political agendas.”

Although McRaven did not single out lawmakers by name, he made clear that he was angry at the Senate for its treatment of Rear Adm. Brian L. Losey, the commander in charge of the Navy’s elite SEAL teams and other commando units. Losey, who formerly served under McRaven, was denied promotion last month and is being forced to retire after several senators from both parties pressured the Navy to hold him accountable for retaliating against multiple whistleblowers.

Calling Losey’s fate a “miscarriage of justice,” McRaven called him “without a doubt one of the finest officers with whom I have ever served. Over the past 15 years no officer I know in the SEAL Teams has given more to this country than Brian.”

McRaven accused lawmakers of pushing for Losey’s ouster for unspecified political reasons. “It is clear in this case that certain members of Congress didn’t care about Losey’s innocence. Nor did they seem to care that he has sacrificed more for this country than most members on Capitol Hill — or that the emotional strain of this investigation was devastating to his family. It is clear that all these lawmakers cared about was political leverage.”

McRaven’s description of Losey as an innocent victim is at odds with the findings of the Defense Department’s inspector general, which concluded that he had repeatedly violated whistleblower-protection laws.

The agency investigated Losey five times after subordinates complained that he had wrongly fired, demoted or punished them during a vengeful but fruitless hunt for a person who had anonymously reported him for a minor travel-policy infraction. After conducting separate investigations that involved more than 100 witnesses and 300,000 pages of emails, the inspector general upheld complaints from three of the five staffers and recommended that the Navy take action against him.

The Navy, however, dismissed the findings that Losey had violated the law, and was poised to promote him last fall to become a two-star admiral until details of the case were revealed publicly for the first time in October by The Washington Post. That prompted several senators to object to the Navy’s plans. They turned up the pressure with a variety of legislative tactics until Navy Secretary Ray Mabus relented in March and announced that Losey’s promotion had been nixed.

In remarks on the Senate floor in April, Sen. Charles Grassley (R-Iowa), the chairman of the Senate Judiciary Committee, called Losey “an honored naval officer.” But he said that it was clear from the inspector general’s investigations that Losey was “a serial retaliator” who had broken the law. “He can only blame himself for what happened . . . and must now pay the price.”

Losey is a preeminent figure in the military’s secretive Special Operations forces who once commanded SEAL Team 6. Most recently, he has served as leader of the Naval Special Warfare Command and has also served in Afghanistan, Iraq, Panama, Bosnia, Somalia and other conflict zones. The whistleblower complaints stem from his time as commander of U.S. Special Operations Command-Africa, also known as SOCAFRICA.

On Monday, he spoke publicly for the first time about his ouster. “I am deeply humbled by Admiral McRaven’s comments and was privileged to serve under his inspiring leadership,” he said in a brief statement released through the Navy. “I remain unambiguously accountable and responsible for the actions that I took while serving at SOCAFRICA.”

McRaven retired from the Navy in 2014 and now serves as chancellor of the University of Texas system. He and others in the Navy saw Losey’s case very differently than the Senate and seethed at the intervention by lawmakers. In his op-ed, McRaven dismissed the whistleblowers as lazy employees who abused the inspector-general system to seek revenge on Losey. He also ripped the inspector general as an agency run amok, calling it “apparently accountable to no one, dismissing the recommendations of the services and ruining officer’s careers.”

Had he stopped there, McRaven’s comments probably would not have attracted much public attention. Instead, he went on to slam lawmakers and question whether a fundamental underpinning of the American system of government — civilian control of the military — was frayed or at risk.

“The greater concern for America is the continued attack on leadership in the military,” he wrote. “During my past several years in uniform, I watched in disbelief how lawmakers treated the chairman, the service chiefs, the combatant commanders and other senior officers during Congressional testimony. These officers were men of incredible integrity, and yet some lawmakers showed no respect for their decades of service.”

While it is not uncommon for retired military brass to exercise their First Amendment rights, what was remarkable about McRaven’s comments was how he apparently had the backing and encouragement of active-duty Navy leaders to sound off in public.

McRaven showed his column to senior Navy brass before publication. It prompted an effusive public statement from Adm. John M. Richardson, the chief of naval operations and the highest ranking officer in the Navy.

“Brian Losey is an outstanding officer who has sacrificed much for our Navy and nation,” Richardson said. “I read Admiral McRaven’s piece with great interest; he raises a number of important issues that deserve additional consideration, and I welcome that conversation.”

McRaven’s attack on federal whistleblower-protection laws and the Pentagon’s inspector general didn’t mention how rare it actually is for officers such as Losey to get into trouble for violating them.

In comparison with other federal employees, whistleblowers working in the military or national security agencies must meet a higher burden of proof to win their cases. Of the more than 1,000 whistleblower complaints that are filed each year with the Pentagon’s inspector general, about 97 percent are dismissed, or categorized as “unsubstantiated,” records show. For three separate complaints to be upheld against a single officer is almost unheard of.

The whistleblowers in Losey’s case worked under him in 2011 and 2012 at SOCAFRICA, a command based in Stuttgart, Germany. In his column, McRaven labeled the whistleblowers as ineffectual staff members “who had been living in Europe for years enjoying the comfortable lifestyle in Stuttgart,” suggesting that they simply rebelled at Losey’s demands to work harder.

One of them was Fredrick D. Jones, a retired Army Special Forces colonel who served as Losey’s civilian chief of staff. Jones was abruptly demoted after Losey suspected — wrongly, it turned out — that Jones and the other whistleblowers had turned him in for a minor travel-policy infraction.

In an emailed statement, Jones called McRaven “the finest senior officer I worked for over my career.” He noted that McRaven had personally presented him with a Defense Superior Service Medal when he retired from the Army in 2007, “something I don’t believe he would have done had he thought I was incompetent or unprofessional or was there ‘fighting to maintain my comfortable life’ in the Special Operations community.”

Calling all of the whistleblowers “outstanding performers,” Jones said that McRaven “must have simply been misinformed” about the case by Losey, whom he characterized as “masterful at managing upward.”

“Losey is extremely bright, hard-working and a dedicated and decorated officer, but he is no William McRaven,” Jones added. “His seniors never saw the real mean-spirited and toxic leadership style that he employed.”